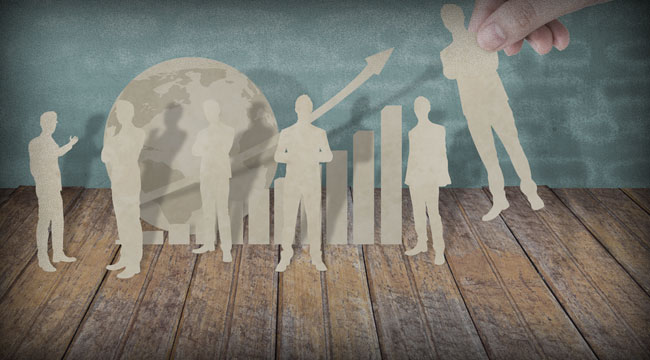 The Dow is still rising. It rose another 125 points yesterday… hitting a new record high.

We’re still thinking about how so many smart people came to believe things that aren’t true. Krugman, Stiglitz, Friedman, Bernanke — all seem to have a simpleton’s view of how the world works. They believe they can manipulate the future and make it better. Not just for themselves, but for everyone. Where did such a silly idea come from?

Aristotelian logic came to dominate Western thought after the Renaissance. It was essentially a forerunner of positivism — which is supposedly based on objective conditions and scientific reasoning. “Give me the facts,” says the positivist, confidently. “Let me apply my rational brain to them. I will come up with a solution!”

This is fine, if you are building the Eiffel Tower or organizing the next church supper. But positivism falls apart when it is applied to schemes that go beyond the reach of the “herald’s cry.”

That’s what Aristotle said. He thought only a small community could work at all. Because only in a small community would all the people share more or less the same information and interests. In a large community, you can’t know things in the same direct, personal way. So it’s hard for people to work together in the same way.

In a large community, you have no idea who made your sausage or what they put in it. You have to rely on “facts” that are no longer verifiable by direct observation or personal acquaintance.

Instead, the central planners’ facts usually are nothing more than statistical mush, wishful thinking or theoretical claptrap — like Weapons of Mass Destruction, the unemployment rate and the Übermensch.

Large-scale planning fails because the facts upon which it is built are unreliable, frequently completely bogus.

And it fails because people don’t really want it.

In a large community the planners usually have their own agenda… often a hidden one. They may call for more strict law enforcement, while getting campaign contributions from the prison industry. They may seek a cure for cancer, and depend on the pharmaceutical industry for job offers. They want a united Europe… and hope to be its head man.

But though large-scale planning provides almost countless opportunities for corruption, it’s not the dirty dealing that dooms it. Instead, it is that the planners don’t know (or care) what people really want… and don’t have the means or the information necessary to achieve it anyway.

As we have already seen, practically all the “public information” used by central planners is empty and most often misleading. But the problem is much more basic than the quality of the information or the corruption involved.

When we think of what people “want,” we are not really talking about their conscious, stated desires. We are speaking broadly of what they might be able to get… if allowed to do so… given the facts on the ground.

You might better describe this process of getting as much of what you want as possible as the progress wrought by evolution, where trials and errors result in “the best we can do.”

Not perfect. Not the end of history. Just another step toward a future that is unknowable.

When you boil it down, large-scale central planners fail because they believe three things that aren’t true.

First, that they know current conditions (wants, desires, hopes, capabilities, resources). In other words, that they know the exact and entire present state of the community they are planning for.

Third, that they are capable of creating the future they want.

None of those things is more than an illusion. Together, they constitute what F. A. Hayek called “the fatal conceit that man is able to shape the world around him according to his wishes.”

As to the first point, central planners cannot know current conditions because that would require an infinite amount of information. It would require “minute knowledge of a thousand particulars which will be learnt by nobody but he who has an interest in knowing them,” wrote Samuel Bailey in 1840.

The planners have nothing like that. Instead, they have a body of public knowledge, which as we have seen is nothing more than popular theories, claptrap and statistical guesswork.

As to the second point — that the central planners are blessed with some gift that tells them what the future should be for complete strangers — we pass over it without argument.

No one really believes that people in the U.S. Congress or the French National Assembly… or in the bureaucracies and think-tanks of these nations… has anything more to guide him than anyone else (which is to say only his own likes and dislikes, prejudices and fears, and self-serving ambitions).

Of course, each man always does his best, at his own level, to shape his world in a way that pleases him.

The central planner steps in to try to impose his own version of the future. Evolution follows its own course, as the plans of individuals and groups succeed or fail.

Where evolution is taking us, no one knows. But the large-scale central planner thinks he knows where it ought to go… and he doesn’t mind giving it a shove, disrupting the plans of millions of people in the process.

As soon as the smallest bits of time and resources are shanghaied for the central planners’ ends rather than those of individual planners, the rate of evolutionary progress slows. The trials that would have otherwise taken place are postponed or canceled. The errors that might have been revealed and corrected are not discovered. The future will have to wait.

People are easy to deceive, especially when they only have access to “public information.” Out of range of the herald’s voice, they have no more idea of what is going on than the planners themselves.

They are encouraged to believe that the collective plans are beneficial. Often, they go along with the gag — for decades — even as the evidence of their daily lives contradicts its premises and undermines its promises.

That was the story in Russia and China after the communist takeovers — where the planners’ extravagant schemes endured 70 and 30 years respectively.

But not everyone goes along. When people resist, the planner sees them as obstacles to his success. Ruthless planners then begin purges, cleansings, regulations, famines, deportations, disappearances, tortures, drone attacks and mass murders to encourage compliance.

But their plans are wrecked anyway, because not only do they retard the future, they also don’t lead to the outcome the planners expect.

Typically, the designers argue that the people must make sacrifices but that it will all come right in the end. “You can’t make an omelet without breaking some eggs,” said Lenin.

People go along with breaking a few eggs (particularly if they belong to someone else) for a while. Ultimately, the problem is the omelet; it never makes it to the table. And the meal that ultimately does arrive is disgusting.

No “workers’ paradise” ever happens. The War on Drugs (or Poverty… or Crime… or Terror… or Cancer) ends in a defeat, not a victory. Unemployment does not go down. Or if any of these grand programs “succeeds,” it does so at a cost that is far out of balance with the reward.

Why do these plans fail? The simple answer is because that’s not the way the world works.

Life on Earth is not so rational that it lends itself to simpleminded, heavy-handed intervention of the naïve social engineer. Bridges are designed. So are houses. And particle accelerators. Economies are not. Neither are real languages. Customs. Markets. Love. Marriages. Children. Or any of the other really important things in life.

Not to overstate our case, however, it is also true that humans can design and achieve a certain kind of future. If the planners at the Pentagon, for example, decided that a nuclear war would be a good thing, they could bring it about. The effects would be huge. And hugely effective.

But this extreme example reveals the only kind of alternative future that the planners are capable of delivering, by pulverizing the delicate fabric of evolved civilized life.

It is a future that practically no one wants, because it means disrupting the private plans of most of the world’s people — for marriage, business, babies, baptisms, hunting trips, shopping, investment and all the other activities of normal life. Stopping those private plans means arresting the particular trials and errors of ordinary people upon which the civilized future depends.