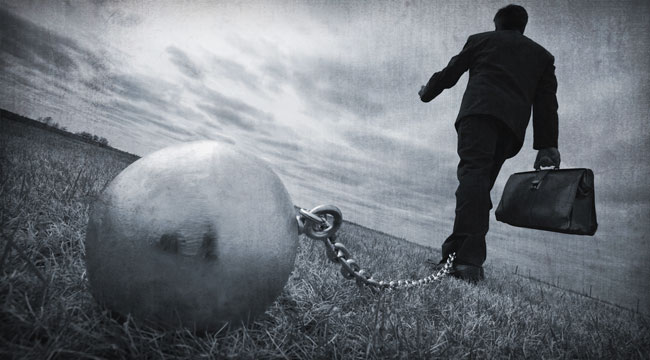 In order to stimulate lending and get the economy going, the European Central Bank (ECB) recently said it could take more drastic action. Among the tools considered are negative interest rates. Meaning, the ECB would charge banks on reserves held at the central bank.

It’s a strange stimulus plan, built on a faulty assumption about how banks lend. And it won’t work.

What the ECB needs to understand — as well as our own Federal Reserve Bank — is that the problem is not lack of motivation on the part of the banks. The problem is lack of willing and qualified borrowers.

Instead, the myth persists that banks are just sitting on excess reserves and somehow we need to motivate them to “lend them out.”

But here’s the problem with that: banks don’t lend out those reserves at a macro level. They can’t. (More on that in a minute).

Banks can’t lend out reserves. It’s not possible at the macro level.

Just to show I am not attacking a straw man, here is an excerpt from an Op-Ed piece in The Wall Street Journal recently:

“European Central Bank officials signaled on March 25 that they were willing to take far more aggressive action to drive down borrowing rate for private business. That includes negative interest rates — meaning banks would be charged for keeping reserves there — which would, in theory, encourage banks to lend funds currently parked at the central bank.” [Italics added].

The writers of this piece are Benn Steil and Dinah Walker. Steil, the Journal says, is a “director of international economics at the Council of Foreign Relations” as well as an author. Walker is “an analyst at CFR.” Presumably, not uninformed people. And yet they believe banks lend out excess reserves held at the central bank.

One more example is from my own favorite financial writer, James Grant, whose work I admire very much and read religiously. In the last issue of Grant’s, March 21, there is this about the U.S. situation:

“Either QE is inflationary or it is not. America’s banks sit atop $2.5 trillion in excess reserves. Should they choose to mobilize those balances to the full extent of their 10% reserve requirements, they could issue $25 trillion in new loans.” [Italics added].

The banks could issue $25 trillion in new loans whether they had those excess reserves or not — assuming they had qualified and willing borrowers.

That’s because banks do not lend excess reserves. Banks create money (bank deposits) when they lend. The other way the banking system gets deposits is from government deficits. When the government spends more than it takes in, it credits bank deposits. The offset for those deposits is reserves. (Held at the central bank). Stick with me here…

The only way reserves go down at the macro level is if:

That’s it. No lending is involved.

I’ve struggled to find ways to explain this in very simple terms. It’s hard to do without getting wonky, or using some math or diagrams.

Let me try a simple balance sheet of the central bank. This accounting identity makes clear those three bullet points:

So, if you like math, lower Reserves and you see you have three ways (or some combination) to keep the equation in balance. For example, reduce reserves and offset by reducing assets (i.e., sell Treasury securities held by the central bank). Again, no lending involved.

Now, look at a super simple balance sheet for the banking system as a whole, with assets on the left:

So, when the banking system makes a loan it also creates a deposit. Each is perfectly offset. Done. No use of reserves.

When the government makes a deposit in the banking system, where is the offset to keep the equation in balance? It’s in reserves at the central bank. They go up.

QE is a policy aimed at reducing interest rates. But you can now see the tie with lending is far from tight. Maybe, at the margin, lower rates induce a borrower to get a loan that it wouldn’t have otherwise. That’s debatable, but the fact that banks don’t lend out excess reserves at the macro level is not debatable.

And in fact, the banking system as a whole has little control over its reserve level. That’s determined largely by the central bank. If the central bank wants to siphon off excess reserves, one way would be to reverse QE (sell Treasury securities).

You can also see that QE is hardly pumping money into the economy. For all the talk about how it is inflationary, it isn’t insofar as it is a swapping of bank deposits in place of higher-yielding Treasury securities.

Anyway, enough of that. I feel pedantic writing this kind of stuff, and I don’t like that feeling. But I think it is important to understand these points. Central bank actions draw a lot of water in markets these days and so it pays to understand what they are actually doing.

Should you want a fuller discussion, I recommend googling “Repeat After Me: Banks Cannot And Do Not ‘Lend Out’ Reserves” by Paul Sheard. I’ve recommended it several times before. It came out last summer and it is as clear a discussion of the issues as I’ve found. Sheard’s exposition inspires my own crude attempt above.

Ed. Note: So there you have it… Any attempts by a central bank to “stimulate” economic growth are futile, at best… and downright destructive, at worst. But there are ways to safeguard and even grow you wealth no matter what happens next. Sign up for the FREE Daily Reckoning email edition, right here, and start making your money work for you.