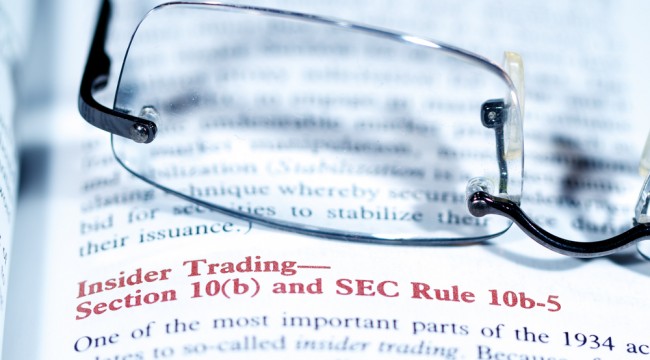 Why ALL Insider Trading Should Be Made Legal

People are taking it easy, sitting on benches in the shade. We had to put in a window air-conditioner to take some of the heat out. Still, we sweat… and we wait for the cool of the evening.

The markets are lackluster too. A little up. A little down. Languid. Summertime slow.

We have been focusing on technology – sometimes directly, often obliquely.

It is the subject of our next monthly issue of The Bill Bonner Letter, requiring us to do some homework with the help of our resident tech expert, Jeff Brown.

But today, let’s look at how the stock market reacts to new technology.

Investors are supposed to look ahead. They are expected to dope out the future earnings of technology stocks and figure out their present value.

Not that they know immediately and to the penny what Twitter or Tesla should be worth. But markets are always discovering prices, based on public information flowing to investors.

The problem is the feds have distorted… twisted… and outright counterfeited this information. They falsified it for the benefit of the people it’s supposed to be protecting us against – the insiders.

The entire edifice of federal regulation and policing is a scam – at least when it comes to the stock market.

First the feds claimed to be creating a “level playing field” by prohibiting “insider trading.”

If you had privileged information – say, as the accountant for a Fortune 500 company… or the lawyer for an upcoming merger – you were supposed to play dead.

“Front-running” – buying or selling in advance of the public release of information – is against the law. And in 1934, Congress set up a special bureaucracy – the Securities Exchange Commission – to enforce it.

But the SEC never leveled the playing field. Instead, it tilted it even more in the insiders’ favor.

Those who knew something were not supposed to take advantage of it. So this information became even more valuable.

That is why so many investors turned to “private equity.” Insiders at private companies – held close to the vest by the investment firms that owned them – could trade on all the inside information they wanted.

The law prohibits insiders from manipulating a publicly traded stock for their benefit.

But there’s an odd exemption for the people who control a public company. GM announces a share buyback plan, for example. It will spend $5 billion to buy back its shares in the open market and then cancel them. (This raises the earnings per share of the outstanding shares, making them more valuable as a result.)

Why would an automaker – recently back from the dead, thanks to a handout from the feds – take its precious capital and give it to management (in the form of more valuable stock options) and shareholders (in the form of higher stock prices)?

There you have your answer: GE execs and their insider shareholders (mostly hedge funds) joined forces to manipulate the stock upward and give themselves a big payday.

The pump-and-dump hedge funds will come back to GM’s buyback well year after year until the cash flow once again runs dry.

Taxpayers and workers should demand that open-market repurchases by all companies be banned. Stock buybacks manipulate the stock market and leave most Americans worse off.

Here at the Diary, we disagree…

The feds should not ban share buybacks. Instead, insider trading should be legal for everyone.

And the feds shouldn’t bail out the insiders, either. The government bailed out GM to the tune of $50 billion in return for a 61% equity stake in the company.

Just look at the valuations of today’s tech companies. They’re over the top, much like they were at the peak of the dot-com bubble in 2000. They are driven to extraordinary levels not by a prudent calculation of anticipated earnings but by the Fed’s EZ money regime.

This conclusion, by the way, was buttressed by our look at the automakers of 100 years ago.

Now, there was a game-changing industry!

It was so promising and so crowded with new entrants that you could barely walk down Shelby Street in Detroit without getting run over by an automobile you’d never heard of.

Most of those companies went broke within a few years. A few, however, prospered.

GM’s share price barely budged between 1915 and 1925 – when the company was one of the greatest success stories of the greatest new tech industry the world had ever seen.

But then, in 1927, the influential New York Fed president Benjamin Strong gave the market “a little coup de whiskey.”

The Fed not only bought $445 million of government bonds, resulting in the biggest increase in bank reserves the U.S. had ever seen, but it also cut its key lending rate from 4% to 3.5%.

In other words, the prices of “tech” stocks were manipulated then – as now – by the feds.

Cheap credit – not an honest calculation of anticipated earnings – is what sent GM soaring in the late 1920s.

And it is why our Billion-Dollar Tech Babies are flying so high today.