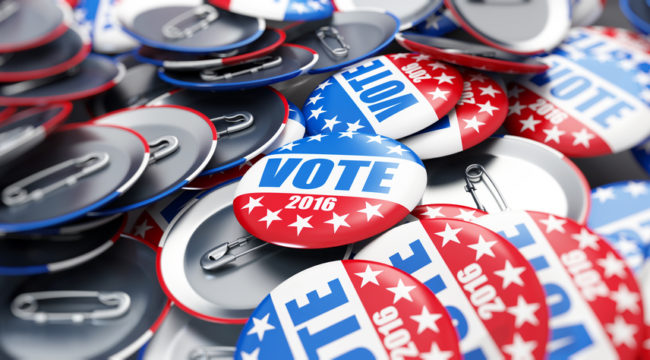 Whom Is Gold Voting For?

“Whom is gold voting for?” wonders CNBC in half proper English. “Whom,” of course, being The Donald or Herself.

“Some market participants say that a surprise Trump victory will cause considerable market anxiety,” says the network, “leading safe havens like gold to surge.

“Others,” it counters, “say that Trump’s antipathy for stimulative monetary policies will mean more rate hikes down the line, spiking the dollar and consequently hurting gold prices.”

Citigroup thinks gold yanks the lever for Trump this fall: “We expect a Trump win would bring out higher volatility in gold and forex, which in turn should lead to higher volumes in other precious metals.”

But that’s not the half of it, according to John Ing, president and CEO of Maison Placements Canada. He predicts gold will spike $100 overnight if Trump wins. He compares the upcoming election to Brexit, when the “smart money” got taken for a ride:

(Margin note: Jim Rickards was the real smart money. He predicted Brexit, and his readers had the opportunity to double their money practically overnight if they took his advice.)

Gold’s taking a riotous shellacking today — down $40! Immediate explanation: Cleveland Fed President Loretta Mester scared the horses yesterday with talk of a rate hike this November. If the data come in as she expects, she honked, the case for a move on Nov. 2 “would remain compelling.”

“You can safely forget about a November rate increase. That Fed meeting is just days before the election, and the Fed will keep their heads down and not do anything that might have political ramifications.”

“The sell-off that we are seeing for gold is mainly due to the reason that some Fed members have created noise again that November meeting could be live when it comes to the interest rate. Although it sounds extremely bizarre because we also have the U.S. election in that particular month, and I do not see the Fed combining the two risky events together.”

A good opportunity to “buy the dip”? Could be, according to Jim:

“I don’t like the ‘buy the dips’ mentality for stocks, but it does offer opportunities for gold buyers. If you’re not fully allocated to gold (I recommend 10% of investible assets), and you see a drawdown in the price, that represents a good entry point.”

A $40 drop would certainly qualify.

So… For whom is gold voting this November? To be determined. But as chance has it, the stock market has a say of its own. And it’s already flashing a winner…

As Bloomberg notes, the performance of the S&P 500 between July 31 and Oct. 31 “has a curious way of predicting the winner of the presidential election.” Here it is:

“Should the S&P 500 record a positive return from July 31 to Oct. 31, it signals the re-election of the party in power, while a decline suggests replacement. The S&P ended September slightly below its July close, so the election results are at the mercy of the market’s October performance.”

And if the election were held today, it says Trump would win.

The S&P’s been down for the last three months. Not by much (minus 0.33%). But still down. And it’s tripping out of the gate so far this young month — the S&P’s down another 13 points today.

If Trump’s your man, another down month is just swell. If Hillary’s your guy, you’re down on two knees praying for a comeback. Hard.

But October has a pretty bad history.