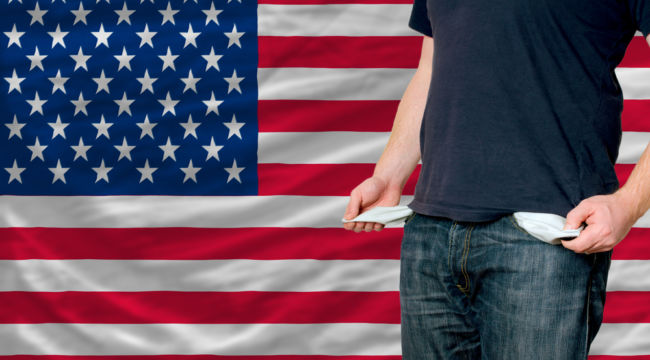 Who Will Pay for It All?

$322 billion of it will restock the “Paycheck Protection Program.” $75 billion will race for the hospitals. $25 billion will increase COVID-19 testing.

This latest largesse follows the previous round.

We hope sincerely that it does some measure of good. You may even insist that government is under obligations to open the purse in this time of emergency.

It was, after all, government that seized the economy by the scruff… and clapped it into jail.

So government can jolly well pay to sustain those unemployed millions rotting behind the bars.

But here is the difficulty of course:

Government claims no resources of its own.

The Citizen Pays One Way or the Other

Government must press a pistol against the citizen’s ribs… and ransack his wallet for tax money. Or it can take to the credit markets in search of loaned money.

But even if government borrows, the pistol comes out. The citizen must pay to service that loan through taxes. And how — again — does government take in taxes?

Either way… the citizen pays.

Herr Friedrich Nietzsche certainly hooked onto a truth when he wrote:

“Whatever [the state] has, it has stolen. Everything about it is false; it bites with stolen teeth.”

Those teeth, those stolen teeth, are presently biting hard.

We might further mention the silent thief of inflation. This is the clandestine tax that government bites out of citizen hides.

In days as these, we might recall the timeless principles of economics. Here is Henry Hazlitt from his masterly primer on economics Economics in One Lesson:

Everywhere government spending is presented as a panacea for all our economic ills. Is private industry partially stagnant? We can fix it all by government spending. Is there unemployment? That is obviously due to “insufficient private purchasing power.” The remedy is just as obvious. All that is necessary is for the government to spend enough to make up the “deficiency”…

Here we shall have to say simply that all government expenditures must eventually be paid out of die proceeds of taxation; that to put off the evil day merely increases the problem, and that inflation itself is merely a form, and a particularly vicious form, of taxation… ultimately every dollar of government spending must be raised through a dollar of taxation. Once we look at the matter in this way, the supposed miracles of government spending will appear in another light.

That light will be visible when the present smoke clears out…

The crisis is dynamiting mighty holes in the nation’s finances. And this taxpayer of ours will be drafted to patch them.

The national debt was already going to $30 trillion by decade’s end. But it could well attain $30 trillion — or some other enormity — within a mere five years.

We make no moral judgment today of the spending’s necessity. Millions are languishing, forlorn and desperate.

We merely remind you the bill will come your way soon or late.

As we have stated before, we hope this economic shutdown is worth the hell it has raised.

Else it is the most disastrous blunder in a very long history.

What can approach it? The economy has never been placed in suspended animation.

And some evidence indicates the freeze may be unnecessary…

The epidemiological men have hunted up thousands of people in the state of California. One batch resides in Los Angeles County. The other, in Santa Clara County. That is near San Francisco.

These Californians were tested for antibodies to the coronavirus. These tests suggest the virus has invaded far more residents than official numbers indicate.

Assume a general distribution of the virus within the county… and the study concluded that 221,000–442,000 adults have already been infected.

Meantime, Santa Clara County testing earlier this month indicated infections between 48,000 and 81,000. The official figure at the time ranged near 1,000.

Here is the central conclusion of the studies:

“But wait,” you object. “If these findings are correct, it means the virus is far more widespread than we imagined. That’s awful news.”

Ah, but it is in fact lovely news.

It would indicate a drastically reduced mortality rate. Many of the infected were never aware of the invasion… or merely exhibited cold symptoms.

“Is very consistent with the fact that the virus is very common but not killing at the rate we thought.”

If one assumes that the number of asymptomatic or minimally symptomatic cases is several times as high as the number of reported cases, the case fatality rate may be considerably less than 1%. This suggests that the overall clinical consequences of COVID-19 may ultimately be more akin to those of a severe seasonal influenza (which has a case fatality rate of approximately 0.1%)…

The nation withers under home arrest to keep down a disease with a case fatality rate of 0.1?%

Yet this is the same Dr. Anthony Fauci who would extend the imprisonment for months and months.

The Unseen Victims of the Virus

Meantime, the unemployment claims pile up. And as we recently reported…

Each 1% increase in the unemployment rate may equate to 30,000 ended human lives from suicide, substance abuse and related deaths of despair.

Are these lives less valuable than the viral victims?

We do not look away from human suffering the virus has wrought. A member of our extended family — aged 50 years — succumbed to this invisible murderer.

He was afflicted with diabetes.

Meantime, a slight acquaintance of ours, aged 51 years, likewise succumbed. The virus had him from the outset.

This fellow was afflicted with both diabetes and asthma. And his blood pressure exceeded all safe limits. These are three severe “underlying conditions.”

But is it not better to isolate unfortunates with these conditions — and the elderly — while the young and sturdy return to commerce?

We hazard it is.

It is the route that Sweden has followed. And it appears to be rubbing along rather well.

The virus may nick Swedish GDP 1–4% this year, by some estimates.

He may be mistaken of course. But we suspect he is nearer to the bull’s-eye than those economists forecasting a V-shaped surge.

That position has little excuse in the facts… at least as we see them through the bars of our prison cell.

The damage extends too wide and runs too deep.

And recall, the ultimate bills have yet to come due…