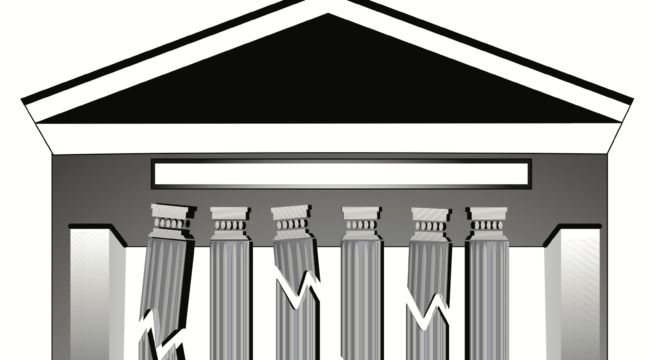 A central pillar holding up the stock market is creaking, groaning… and giving way.

Should it buckle under, many fear Wall Street will topple over.

What is this distressed pillar? And can the Federal Reserve prop it back up?

These are the questions that nag us today.

First a structural report of the stock market…

Stocks opened happily and solidly in green this morning. But comments from a Federal Reserve regional commander panicked them rapidly into red.

That is because he believes rates are near “neutral” — where they neither push nor pull:

We are roughly where neutral is… And I think we should stay here for a while and see how things play out.

Reporters specifically asked this fellow if he expected additional easing.

His response sent panicked shudders through Wall Street, like news of an approaching swarm of locusts:

Importantly… this Harker is not a voting member of the Federal Reserve’s preposterously misnamed “Open Market Committee.”

He has no direct say on interest rates.

He nonetheless bosses a regional reserve bank. His babblings can therefore raise breezes… and eyebrows… and goose pimples.

The Dow Jones staged a late-day rally… and scratched out a 49-point gain.

The S&P nearly broke even on the day, posting a slender 1-point loss. The Nasdaq lost 29 points.

But what is this distressed pillar holding up the stock market?

It has buttressed stocks for nearly a decade. It has lent $4.2 trillion of structural support since 2013 alone.

“[Their impact] is so profound,” argues CNN Business, “that some worry about how stocks will hold up without them.”

We refer of course to stock buybacks.

Corporations have been the largest purchasers of stocks this past decade. This buttressing pillar has lifted the market up… and held it sturdy.

It now devotes over 50% of its profits to buybacks.

And as mentioned, corporations have emptied $4.2 trillion into buybacks since 2013.

Have stock purchases by mutual funds and ETFs kept pace?

A simple “no” fails to give the flavor of it.

Not only have mutual funds and ETF purchases fallen behind… their contributions run negative.

Bank of America Merrill Lynch reports they have pulled $84 billion from the stock market over the same space.

But now the buyback pillar is giving out, reports The Wall Street Journal:

Companies in the S&P 500 repurchased about $166 billion of their own stock in the second quarter, S&P Dow Jones Indices projects, down from $205.8 billion in the first quarter and $190.6 billion in the same period a year ago. That marks the lowest total since the fourth quarter of 2017 and the second consecutive quarter of contraction… The S&P 500 slumped almost 7% in May, but the buyback data suggest companies didn’t step in to support their stock prices the way they did during the final months of 2018.

Just so. But why not?

Wary corporations are evidently storing in reserves… like squirrels storing in acorns against approaching winter.

That is a sign that corporations are potentially tightening their wallets as executives grapple with new tariff threats in the long-simmering trade dispute with China, weakening corporate earnings, signs of a downturn in global growth and uncertainty over the Federal Reserve’s interest rate policy.

Who will keep the bull market rubbing along if corporations withdraw their support? Who will answer the bugle?

Mutual funds and exchange-traded funds will not — evidently.

Meantime, buybacks face rising opposition from political quarters. Democratic presidential candidates, for example, have come out against them.

Buybacks fatten the 1%, they moan… and seize healthful bread from the mouths of labor.

But certain “free market” Republicans also have buybacks in sight. Marco Rubio would increase taxes on gains coming by way of buybacks.

We are not surprised. Buybacks were in fact illegal for much of the 20th century.

The old regulators, with their straight faces, straight laces — and straighter rulers — considered them a form of stock market manipulation.

And are they not — in one essential sense?

Corporations enjoy higher stock prices, it is true. But not from constructing a mightier mousetrap. Or a worthier widget.

That is, the market is not rewarding them for improving the world in some small way.

Their higher stock prices instead issue from the financial magician’s trick bag.

The Unseen Cost of Buybacks

If anything at all, buybacks drain capital from the productive economy… as a Paul Krugman column drains knowledge from the minds of its readers… or a Justice of the Supreme Court drains the Constitution from the law.

Each dollar sunk in buybacks is one dollar unspent on plants. On equipment. On research and development.

That is, one less dollar it dedicates to the future.

The SEC essentially legalized buybacks in 1982 — under a pulverizing rain of Wall Street lobbying, we imagine.

Now, over 30 years later, stock buybacks have shoved stocks to record heights. Yet few consider it unusual or out of the way.

Here is progress… of a sort.

Here at The Daily Reckoning, we are for liberty — in a general way, in a particular way, ipso facto and world without end.

What a corporation does with its money is none of our concern.

Whether a corporation spends its wherewithal on buybacks, knickknacks, gimcracks, thumbtacks or bootblacks… it is all one to us.

Nor is it the concern of anyone else but its shareholders, by our lights.

But let us at least recognize the coin comes with two sides.

The Federal Reserve hammered down interest rates for much of the past decade.

Ultra-low interest rates enabled corporations to borrow massively — and they did.

They plowed much of these borrowings into buybacks.

The result of this corporate borrowing jubilee?

Corporate debt — relative to GDP — has never been higher. It even exceeds its 2008 summit.

And the higher the peak… the greater the eventual plunge.

This means that many companies are now more exposed to an economic shock in terms of their coverage ratios than back in 2007… If companies do go under on a large scale, it will create a widespread drop in demand for goods/services as well as unemployment, which are all contractionary variables as far as the economy is concerned.

And as Goldman Sachs reports…

Defaults on corporate bonds (with speculative-grade ratings) are projected to record a post-2008 high this year.

Can the Federal Reserve Brace the Crumbling Buyback Pillar?

Despite the aforesaid Patrick Harker, we are convinced the Federal Reserve will have the hammer out again… and pounding interest rates lower.

Lower rates will likely initiate a fresh spree of buybacks.

They may thrust stocks to heights dizzier than ever… for all that we know.

But at a price.

They will only magnify the ultimate collapse. And no pillar will prevent it.

“The cost of every pleasure,” as Buddha probably never said, “is the pain that succeeds it.”