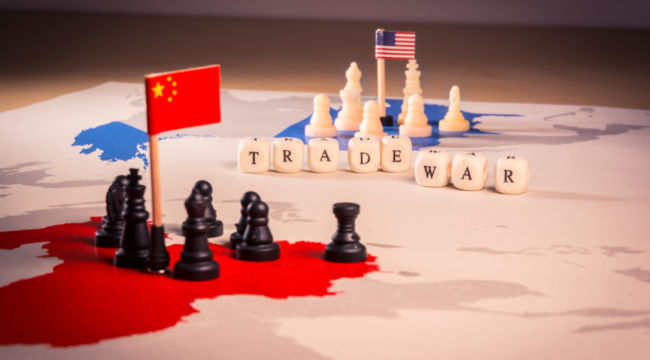 Who Has the Trade War Hurt More: U.S. or China?

Yesterday we hazarded a defense of free trade. Here was the rock of our argument:

A free man — even an American — enjoys the right to purchase his wares at the lowest price he can obtain them.

That is, we stood upon “that right which man has to purchase his sustenance where he can obtain it cheapest.”

But today we vacate the defense counsel’s table. Instead we don the black robe… and take our impartial seat in the judge’s chair.

Which party — the United States or China — is winning the trade war?

That is the case before us today.

We first consult the jury — the stock market.

The Dow Jones was up nearly 400 points by 11 this morning.

That is because the president sat down with China’s vice premier this morning to negotiate trade.

Good things are happening at China Trade Talk Meeting. Warmer feelings than in recent past, more like the Old Days. I will be meeting with the Vice Premier today. All would like to see something significant happen!

The market spent the remainder of the day in elevated spirits.

But to return to the case at bar: Which side is winning the trade war — the United States or China?

Counsel for the United States enters the following evidence:

Chinese economic growth already languishes. And year to date, Chinese exports to these shores fell roughly 10% beneath the previous year’s.

Only half of these exports were subjected to stiffened tariffs.

But additional tariffs enter effect on Oct. 15 and Dec. 15.

In the absence of a trade truce, virtually all Chinese exports — some $500 billion worth — will soon come under the ban.

We can then safely project a 20% plunge in Chinese exports to the United States.

That represents a $110 billion hatcheting of Chinese revenues.

In conclusion, runs this argument, China is losing the trade war. The United States is winning.

But no beads of perspiration form about the Chinese counsel’s brow. He appears unruffled.

He bounds from his seat.

“We Chinese,” he informs us, “are superior strategists. Do you not realize that a Chinese fellow wrote The Art of War?”

He opens by reminding us that the United States manufacturing has plummeted to its lowest level since the financial crisis. And that American exports are severely depressed.

“That $110 billion my opponent referred to? That is, the $110 billion loss American tariffs are inflicting upon us? It does not represent an actual loss to China’s GDP.”

A puzzled expression creases our features…

He lifts from his briefcase a sheet of official-appearing paper…

It reveals the research of one Nicholas Lardy. Mr. Lardy is an economist at the Peterson Institute for International Economics (PIIE).

His findings are summarized by Shawn Tully, senior editor of Fortune:

When China sells mobile phones or appliances to the U.S., a big portion of the parts in those and most other products are made in Vietnam, Malaysia, Japan or other countries that feed China’s factories. The value of the components that Chinese plants contribute to the finished goods, plus value of the labor and machinery use in final assembly, account for only half the sales price of the goods shipped to America.

China’s lost production, the decrease in the portion of the products it actually makes, amounts to 50% of the $110 billion total, or $55 billion. That’s the hit to its GDP.

Meantime — this Chinese legal eagle informs us — while the United States seeks higher tariffs against much of the world, China has lowered tariffs against other countries:

“China has raised tariffs on American products, for example. But here is what you may not know: We have lowered tariffs against other nations that supply the same products. We are therefore unharmed.”

He cites the aforesaid Shawn Tully:

China hammered U.S. goods that it could easily purchase from third countries, especially commodities selling on global markets, slapping 28% tariffs on soybeans, 22.3% on wood, paper and metal products, and 19.3% on chemicals. In each case, those duties more than doubled. Meanwhile, China lowered average tariffs to all other countries from 8% to 6.7%. For example, it’s now buying soybeans from Brazil and Argentina at a 3% duty, and Pacific salmon from Japan at 18.9%, cutting purchases from the U.S fisheries on the West Coast that now pay a 42.4% tariff.

According to the PIIE economists, China is not paying significantly more for the soybeans, chemicals and other products that it used to buy from America and now sources from Argentina or Canada. Even if the third-party prices are slightly higher, they’re offset by the reduction in tariffs on all non-U.S. suppliers. As a result, say the PIIE economists, China is shouldering virtually no deadweight costs at all. It’s remarkable that U.S. tariffs have driven China to the market-driven, trade-enhancing reform shift of lowering barriers to the rest of the world.

“If you Americans think these tariffs are benefiting you so, look at their downstream effects. Your president has handed out $25 billion to your farmers injured by our retaliatory tariffs on their products. That money comes out of the taxpayer’s pocket one way or the other. That’s $25 billion that cannot be spent on additional goods or services. Have you forgotten your Henry Hazlitt?”

A thunderous objection suddenly rises from the American counsel:

“Baseless speculation, your honor! My opponent is not a trained economist.”

We stroke our chin in pensive reflection…

“Objection overruled. We have in fact read Henry Hazlitt. And there is justice in counsel’s argument.”

We instruct the fellow to proceed…

“In all, American consumers and businesses have paid $34 billion in tariffs since the start of the trade war last February through this August. This is according to data from the Trade Partnership and another group called Tariffs Hurt the Heartland. It comes back to deadweight costs, your honor.”

A deadweight loss is a cost to society created by market inefficiency, which occurs when supply and demand are out of equilibrium… With a reduced level of trade, the allocation of resources in a society may also become inefficient.

“Are not tariffs deadweight costs?

“We Chinese have gotten around them by lowering tariffs on non-American goods. You Americans have not. Some estimates say the deadweight costs from tariffs could cost the U.S. economy $160 billion next year.”

The American counsel once again voices a strenuous objection — and on the same grounds — speculation.

The Deadweight Costs to the U.S. Economy

“Your own Congressional Budget Office forecasts that real U.S. GDP will expand $390 billion next year. But without that $160 billion in deadweight costs, your economy would likely expand $550 billion. That is, U.S. GDP would increase 0.9 points without deadweight costs.

“Meantime, deadweight costs from American tariffs only subtract 0.4 points from our own economy because we have lowered tariffs on other nations.

“In conclusion, we are winning the trade war. The United States is losing.”

At which point the Chinese attorney calls upon the testimony of Fortune’s Mr. Tully. From whom:

“This is an outrage,” roars the counsel for the United States. “I demand a retrial!”

He promptly wheels 180 degrees… and storms from the courtroom…