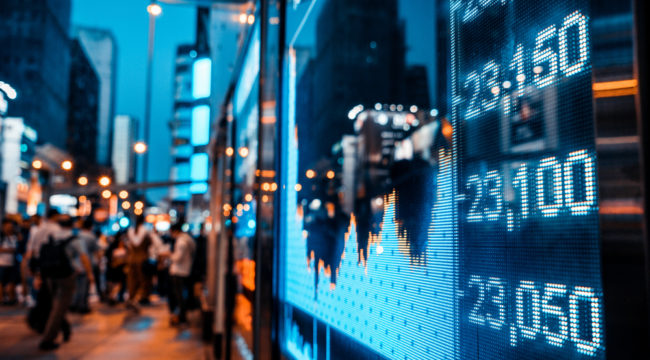 We’re constantly being told nowadays that the economy has been gathering steam and we can expect further growth ahead.

OK, fine, but let’s take a look at real U.S. GDP annual growth since the recession ended in 2009:

Where’s the steam? Can someone show me the “Trump Boom” please? It looks like more of the same to me.

On top of this, the Fed is creating financial and economic headwinds with rate hikes and by reducing the money supply through its new program of quantitative tightening, or QT. You shouldn’t expect any dramatic change under new Fed Chairman, Jerome Powell.

With stock market indices hitting new all-time highs almost daily, despite this week’s pullback, and the economy not much above stall speed, a severe stock market correction/and or recession is in the cards.

I can’t say exactly when, but I’d say it’ll be sooner rather than later.

In the past eight years, major central banks have created over $15 trillion of new money, mostly through purchases of government bonds. These money printing and bond purchase programs have been called QE1, QE2 and QE3 in the U.S., Euro-QE in Europe and QQE (quantitative and qualitative easing) in Japan.

We have not had much consumer price inflation, but we have had huge asset price inflation. The printed money has to go somewhere. Instead of chasing goods, investors have been chasing yield.

But these bailouts came at a high cost.

Central banks have little room to cut rates or print money in a future crisis, even with the Fed’s recent hikes. That’s why the Fed is so determined to raise rates, so it can cut them again when it needs to. Of course by raising rates into a weakening economy, the Fed could be creating the very crisis it’s trying to avoid. The strategy might sound nuts, but that’s how they think.

Meanwhile, taxpayers have no tolerance for more bailouts. And governments around the world are experiencing political polarization. It’s not just here in the U.S. There is simply no will and no ability to deal with the next panic or recession when it hits.

The systemic dangers are clear. The world is moving toward a sovereign debt crisis because of too much debt and not enough growth. Insufficient productivity is the last nail in the coffin in terms of countries’ ability to deal with the debt.

When this new panic hits, investors will have no confidence in the ability of central banks to limit the panic. Unlike 1998 and 2008, the next panic will be unstoppable without extreme measures — including IMF money printing, lockdowns of banks and money market funds, and possible martial law in response to money riots.

I’ve often compared the causes of crises to snowflakes that can trigger an avalanche. Let’s look briefly at three of the most likely snowflakes that could trigger the next financial crisis, all of which are likely in my view. These are by no means farfetched.

Snowflake #1: Credit Crisis in China: China, believe it or not, is in more of a credit bubble than the United States. The United States has got lots and lots of problems. But China is actually much worse — and they don’t have as much experience with this type of credit bubble.

It’s going to collapse. But China doesn’t really know how to deal with it.

Snowflake #2: Failure to deliver gold: This is almost definitely coming. So much of the gold market is “paper gold.” This paper gold market is so manipulated, we no longer have to speculate about it. It’s very well documented. But it all rests on a tiny base of physical gold. I describe the market as an inverted period with a little bit of gold at the bottom and a big inverted pyramid of paper gold resting on top.

Someday, probably sooner than later, somebody is going to show up and say, “I want my gold, please,” and the custodian won’t be able to give it to them. What if a major institution wants its gold but can’t get it?

That would be a shock wave. It would set off panic buying in gold, and inflation expectations — now subdued — could spiral out of control.

Snowflake #3: A geopolitical shock: People yawn and say, “Gee, haven’t we had enough of those lately?” The stock market keeps on going higher, no what seems to happen in the world. But that’s only true — until it isn’t. The fact is, things could easily spin out of control. And then everyone will wonder how they missed it.

You should have gold and other hard assets to weather this storm. The “smart money” does.

Demand for secure vaulting space in major financial centers like London and Frankfurt has been soaring. There are plenty of bank safe deposit boxes in those cities, but investors are insisting on non-bank vaults because they understand that the banks cannot be trusted in a panic.

As a result, proprietors of non-bank vaults haven’t been able to build them fast enough.

Would you rather buy bitcoin instead of gold?

Safety? I don’t think so.

Don’t wait until the panic hits to secure your gold and make arrangements for safe storage. The time to act is now.

You should never go “all in” on any one asset class including gold, which is why I recommend putting only 10% of your investable assets in gold.