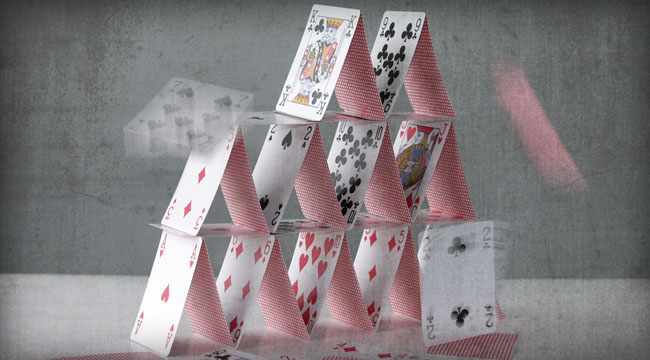 “All of the gold in the world was confiscated in 2020,” writes Jim Rickards from the year 2024, “and placed in a nuclear bomb-proof vault dug into the Swiss Alps.

“The mountain vault had been vacated by the Swiss army and made available to the World Central Bank for this purpose. All G-20 nations contributed their national gold to the vault. All private gold was forcibly confiscated and added to the Swiss vault as well. All gold mining had been nationalized and suspended on environmental grounds.”

During a long conversation, not long after we teamed up with Jim, we asked him to speculate on what the world would look like after the House of Cards comes tumbling down. What he came back with a week or so later was a dystopian vision even Orwell would appreciate.

“The purpose of the Swiss vault was not to have gold backing for currencies, but rather to remove gold from the financial system entirely so it could never be used as money again. Thus, gold trading ceased because its production, use and possession were banned. By these means, the G-20 and the World Central Bank control the only forms of money.

“Some lucky ones had purchased gold in 2014 and sold it when it reached $40,000 per ounce in 2019. By then, inflation was out of control and the power elites knew that all confidence in paper currencies had been lost. The only way to re-establish control of money was to confiscate gold. But those who sold near the top were able to purchase land or art, which the authorities did not confiscate.”

Rickards’ America 2024 — replete with microchips embedded in your arm for access to national health care, the abolition of all paper currencies and the digital redistribution of all wealth — caused a stir on the discussion board and in the Daily Reckoning inbox.

“It is hard to grasp a future so bleak, so dystopian,” writes reader Dale Holmgren, “until you realize what’s happened so far. The neighborhood I grew up in 50 years ago in a medium-sized manufacturing city in the Midwest had jobs and was safe. Now there is the noise of guns many nights, and most of the residents are on welfare. Despite this poverty, the price of homes is 500% higher now than then.

“Fifty-six percent of Americans have a subprime credit rating. Total U.S. debt — that is, its government, businesses and people — has gone from about $1.5 trillion to $60 trillion. We are awash in debt. It has infested and infected every aspect our lives.

“Considering the above, is Mr. Rickards’ cautionary tale so outlandish?”

For over a decade, we’ve been on a quest to understand what the endgame of central bank and political meddling in the U.S. economy — and, by extension, the global economy — is likely to be. Jim’s dystopian account of the world in 10 more years is nothing if not entertaining in a macabre sense: a cautionary tale should the policies and models used by the Fed and Congress persist.

For some light background reading, Jim recommended Simply Complexity: A Clear Guide to Complexity Theory, by Neil Johnson. “It’s the best single book I’ve read. Johnson’s one of the founders in the field. This guy’s the real deal. He’s a Ph.D. and Cambridge scholar but has a very clear writing style. He has a whole chapter on finance. And the book is written for average smart people. So you don’t have to say gee, hm, how does this fungus relate to the stock market?”

“The method that your pension fund manager or stocker broker uses to manage risk, and the contents of your portfolio, will always have one huge built-in limitation. No matter how clever he or she is, it can only be as good as the model he or she employs.

“Standard finance theory may therefore appear to work for a while, but it will eventually fail. And this is far from being a minor flaw since it is precisely these moments when your money is most at risk…

“At this stage, your emotions are probably mixed. On the one hand, it’s fascinating stuff from the point of view of the science of complexity. But on the other hand, it sounds like terrible news for a pensionist in that we cannot trust the standard models of finance.”

“So the standard model that most of the finance world uses to calculate how markets move is not accurate.”

“I don’t know how you can be more blunt,” Jim said looking up after reading from the book.

“At the most basic level,” we asked, continuing what amounts to an interview, “the standard models don’t work because they don’t include feedback loops.”

“And efficiency,” we added.

“They assume efficiency, too,” Jim continued. “Efficiency, equilibrium, random distribution, stochastic method. And all four of those things are wrong. Complex systems are not equilibrium systems. There are feedback loops, and the output is not ordered. Except when sometimes it is. That is the tricky part. The outcome looks ordered until it isn’t.

“As you say,” we agreed, having made similar statements about rising debt and leverages right here in these pages many times, “it’s not a problem until it’s a problem.”

“Right,” Jim went on. “But you can be guaranteed that it will be a big problem. The idea that the crisis is all behind us is dangerous… ‘Oh, that’ll never happen again’… Yeah, right. 1998 was strike one. 2008, strike two. Strike three, you’re out. The next one’s gonna wipe everything out. That’s coming.

“But it doesn’t mean there’s nothing you can do.”

For brevity’s sake, we paraphrase Jim from here:

You have to stop short of saying, “Well, it’s going to melt down on this day.” If that day comes and goes and it doesn’t happen, then you look like an idiot. Instead, go back and read what I said in The Death of Money. There are many possible triggers for the meltdown. If it’s not one, it’ll be another. Either way, you’re going to get the same result.

So set your goals now. Warren Buffett’s bought a railroad. You might be able to do that. But if you’re an individual investor, you can buy some oil, natural gas or hard assets. But do some of those things now. It doesn’t have to be 100% of your portfolio. If I’m completely wrong, you won’t be hurt… and if I’m right, it’ll save your life.

“My mission,” Jim says with a spark of passion, “is to help everyday Americans not be ripped off by people who know better that won’t be honest with the American people. Essentially bankers, government — both parties.

“Christine Lagarde, current head of the IMF, is not a complexity theorist, but she knows it’s all going to crash. And she won’t say that. Janet Yellen actually might not know it’s going to crash, because she’s too much of an egghead. But there are enough people in positions of real power who see what I see and won’t be honest with people about it. And they are perfectly prepared for all those people to lose all their money.

“And I think that’s despicable.”

“Look,” Jim ended somewhat abruptly, “I gotta run. But I’ll come back. I didn’t get my crabcake this time around. I’ll be back, and we’ll cover a lot of the specifics…”

P.S. In today’s email edition of The Daily Reckoning, we unveiled a way to meet Jim Rickards in person. Jim also wrote to readers to explain why the Fed’s bad models take so long to die. If you’re not subscribed though, you missed out. Signing up is free. Just click here, enter your email, and you’ll begin receiving our daily reckonings. If you like Jim Rickards, it’s the surest way to get content from him that you can’t find anywhere else.