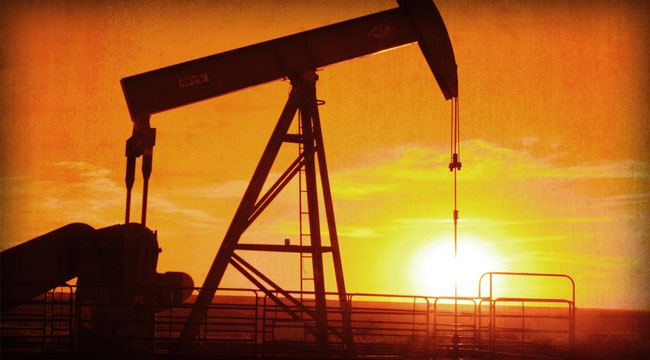 What Saudi Arabia's "Oil War" Move Means for Your Portfolio

Big News! Saudi Arabia just opened a new front in ongoing “oil wars” that are being fought across the world. A few days ago, Saudi made a relatively quiet move; but it may as well have bombed Pearl Harbor, considering the impact and implications.

Saudi actions are already cascading across oil markets. We’ll likely see effects in the short-, medium- and long-terms. What will it mean for your energy investment portfolio? Let’s think it through…

The Saudi move was stealthy; so stealthy that you might have missed it, even if you follow the energy sector. Unlike much else that happens in the Middle East, the Saudi move didn’t involve anything blowing up — well not “blowing up” for real, with blast, heat and dead bodies flying. What happened, specifically?

In response to recently declining global oil prices, Saudi announced that it would lower the price of its exported oil, versus cutting output in the face of relative abundance in global oil supply.

Got that? Lower prices, versus cut supply. Remember, this is Saudi, the so-called global “swing” producer. That is, Saudi has plenty of oil wells, ready to go; already drilled and hooked up to pipes.

Saudi can raise or lower oil output literally by turning valves. Thus, instead of turning valves to the right (“lefty-loosey, righty-tighty,” as an old Army engine maintenance manual explained), Saudi is maintaining output while lowering prices.

Here’s a succinct summary of what’s going on, according to Bloomberg News: “State-owned Saudi Arabian Oil Co. cut prices for all grades and to all regions for November shipments, reducing those for Asia to the lowest level since 2008.”

Get that? Cut prices. All grades. All regions. The lowest level since 2008! Whoa! Didn’t oil markets — and every other kind of market — sort of… umm… crash back in 2008? Yes, I seem to recall seeing something about that…

As you might imagine, a Saudi spokesman put a purely innocent spin on things. Price cuts are intended to “boost margins for refinery clients.” The pricing move is definitely “not the start of a price war,” he says. No. Of course not. Why would anyone think that? Isn’t Saudi well-known for helping refiners boost margins, at its expense? Oh, wait…

Oil traders at Germany’s Commerzbank AG, as well as traders at Citigroup, have a different take on the Saudi price cuts. The downward pricing moves “could be the opening shots in a price war.” Gee, do ya think?

Not to be outdone by Saudi, this week Iran announced that it, too, will sell oil to Asia in November, and at the largest discount since 2008 — there’s that date again. That is, State-run National Iranian Oil Co. will match Saudi price cuts. Per Commerzbank, “The timing of Iran’s price cuts makes the price war more and more probable.”

It’s notable that both Saudi and Iran are lowering prices for customers in Asia. The fact is that Middle East oil producers have recently begun to face strong price competition for oil sales in Asia, their largest market in recent years.

What’s driving the shift in oil trades and the trend to lower prices? U.S-Canadian fracking, as long-time Daily Reckoning readers doubtless know. It’s changing the world. Energy-wise, we’re living not in a “once per generation” time; it’s a “once per three or four generation” transformation.

As oil scholars know, global crude oil output has been relatively flat for several years, across pretty much the entire world, except for the U.S. — another story entirely. Think of the Middle East, where political strife and war has stymied large output increases.

Plus, in the rest of the world, things simply have not unfolded in the oil patch as fast or easily (or within budget!) as people hoped; think of offshore Brazil, or production issues in Angola, East Africa, Australia or any of many other locales.

Or another example; right now (today), per Bloomberg News, Nigeria has not yet contracted to sell half of the oil it plans to load into tankers in November. Why? Well… not enough buyers! So should we expect dramatic price discounts from Nigeria? Don’t be surprised.

In the U.S., however, thanks to fracking, oil output has zoomed upwards. Here’s one chart to illustrate the points I just made above. 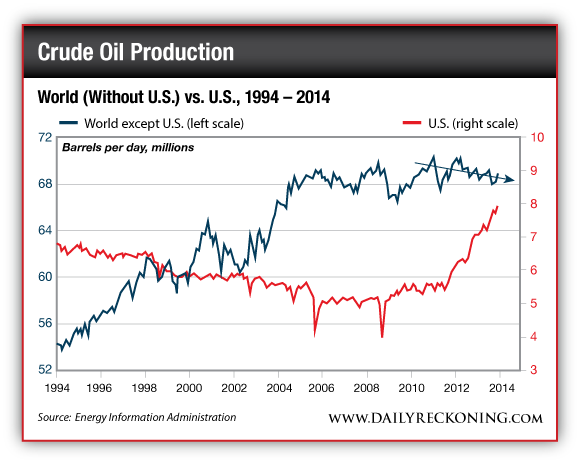 As the chart shows, U.S. fracking has added well over three million barrels per day to global oil supplies within the past six years or so. North America’s oil patch is Ground Zero for a global upheaval in energy pricing and trade patterns — long story. However, for all the fracking success, Saudi will not concede market share caused by tight pricing from new U.S. oil output; that is, Saudi is cutting prices.

Along those lines, my immediate sense of Saudi price-cutting is that it’s an in-your-face effort to maintain Saudi market share. Saudi is deeply concerned about losing markets for its oil over the long haul. (It would make sort of the same problem as Nigeria has — see above.) Recent price cuts are sort of a “buy in” with refinery customers to keep them happy; and this may work for the time being. So Saudi will sell the “same” amount of oil, but for less money.

My next immediate sense of Saudi price-cutting is that it’s a grave mistake for the overall world oil industry. Now everyone will sell the “same” amount of oil, but for less money. Everyone in the energy industry can get squeezed, so that Saudi can attempt to maintain its market share — versus turn its valves righty-tighty, and lower output. That’s what price wars do.

Who or what is the Saudi target in this price war? Well, per the Wall Street Journal, “A Saudi official late last month said that if oil prices went below $90 a barrel, oil companies would decrease output and prices would rebound toward $100.”

That “fracking floor”… could be much lower than Saudi estimates. This price war could get ugly.

Oh really? And which “oil companies” might that be? Again, per a headline in the Wall Street Journal, “Price Drop Tests Oil Drillers.” That is, apparently Saudi believes that U.S. majors, independents, drilling companies and service companies will feel the economic heat, and — presumably — throttle back on drilling and fracking.

Of course, none of this will play out fast or easily. First, I don’t subscribe to the Saudi estimate of a $90 floor for profitable oil from fracking. In the U.S., there are nearly 1.5 million drillable “tight oil” sites, according to a recent estimate I saw at a private conference in Houston.

In other words, the U.S. has plenty of players with sites to drill and a business model to drill ’em; and a good many can afford to conduct business all the way down to $50 per barrel and lower. That “fracking floor,” so to speak, could be much lower than Saudi estimates. This price war could get ugly.

Then we have the drilling rig fleet, onshore and offshore. A drilling slowdown would probably hurt shares in oil drilling and gas well companies. I mean, it could hurt them more than we’ve suffered during the summer-early fall swoon. This is not to say that the companies have structural problems; it’s just that they’ll have a rough spell in the market. If you’re holding for the long term, prepare for a wild ride.

Same thing with the service guys, Halliburton (NYSE:HAL), Baker Hughes (NYSE:BHI) and Schlumberger (NYSE:SLB). They’ve sold down in recent months, but that was a reflection of oil prices dropping $20 or so, from (Brent) $110 to below $90. What if there’s another $20 or $30 to go, on the down-side? Look out. Again, it’s not to say that the companies have structural problems. We’ll experience a rough spell, though. Get set for the same wild ride.

Here in the U.S., any significant diminution in energy industry drilling and operations will impact economies all across the nation. Imagine less drilling, completion and energy-related construction activity from Alaska to Pennsylvania to the Gulf of Mexico, and many places in between. That’s a lot of money that won’t get spent.

If things pull back far enough, we might live through a new version of the classical old “oil bust,” in which contracts get cancelled, people get laid off, leases expire and tax collectors go away empty-handed. In short, say farewell to one of the critical pillars of that (over-rated) U.S. “economic recovery” that political hacks like to brag about.

Then again, another oil bust will give investors a chance to buy into great companies, fixed for the long haul, but selling at bargain prices.

This Saudi oil price cut is just beginning to show effects. It’ll get worse before it gets better.

P.S. If you want to learn about some great bargains in the resource and energy spaces, you’d do well to sign up for the FREE Daily Reckoning e-letter… Inside each issue, readers are treated to a handful of chances to discover real, actionable investment opportunities, including my uniquely profitable research letters. How profitable? Well, readers who have taken my advice have seen double digit gains like 38% and 33% on “safe haven” oil plays just this year. if you’d like to start seeing these kinds of opportunities, click here now and sign up for The Daily Reckoning, completely free of charge.