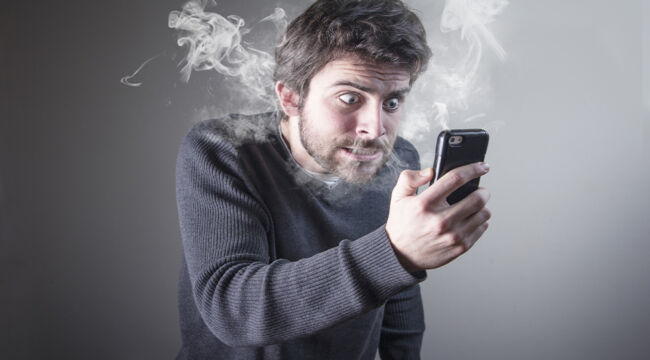 WE are denounced for complicity in yesterday’s atrocities. Reader Dave H:

… Your endless images of brainwashed thugs, goons, mobs and boneheads without any commentary shows you and and your group are complicit and approve of what went on today. I couldn’t be more disgusted. Don’t send me this (expletive deleted) anymore…

We were unable to express yesterday’s spectacle in words. We therefore expressed it in photographs.

If one picture equals 1,000 words, yesterday’s issue ran to some 20,000. We hazarded you would prefer the pictures to the words.

I paid for financial content and all I get are ads for Jim Rickards and your political (expletive deleted). UGH…enough!

Jon S. is an honorable Navy man. He says:

Predictable or no, [yesterday’]s display of insurrection should be neither justified nor glorified. Last I checked, the established rule of law overrides any predicted ‘reckoning’ every time.

Peter M. — meantime — accuses us of an atrocious neutrality:

Yet another fence-sitting but interesting email from the DR. Are you cheering the protesters on or deprecating their behaviour? Or just leaving us all with our own prejudices and assumptions?

Let us now climb down from our fence. It is time to take our lashing from Sheila S:

You call the ‘democracy in action’?? What is wrong with you people??

Lastly, Arthur G. washes his hands of us and our rediculous site. We, like the president and his witless dupes, are deranged:

Remove me from your rediculous site. Trump is mentally deranged, and this proves the same about your site, and all Trump supporters.

Yet we wish to depart in peace… and on the pleasantest of terms. Thus we have mailed Arthur a parting gift in token of our good will…

We trust he will wear his “Stop the Steal” shirt in the identical spirit of defiance we wear our own.

The Shining City on the Hill

Have you ever believed you would witness scenes as yesterday’s? Is not the United States the democratic beacon to the admiring world?

Is it not the “shining city on the hill?”

Yet today its glow is vastly diminished. The gleam is off…

The reference traces to House Speaker Nancy Pelosi. She gushed in 2019 that Hong Kong’s anti-China protests were a beautiful sight to behold.

Now China turns her words against her: 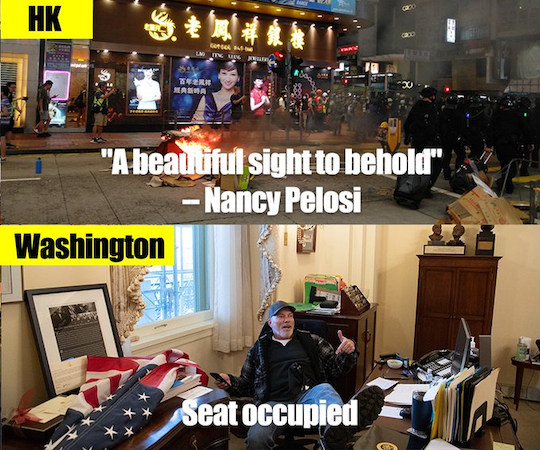 Venezuela expresses its concern over the acts of violence that are taking place in the city of Washington, USA; it condemns the political polarisation and hopes that people in the USA can open a new path toward stability and social justice.

Yet it is a sad, sad day when basket case Venezuela must instruct the United States in democratic ways.

We hazard the United States president fails to appreciate the jest.

His critics, meantime, are howling for his instant resignation. The nation cannot suffer under his evils for even two additional weeks…

Even fellow Republicans are fleeing from him… rats off the sinking vessel.

Charles Schumer is the Senate Majority Leader-in-waiting. This fellow even likens January 6, 2021 to December 7, 1941 — a “day that will live in infamy”:

It is very, very difficult to put into words what has transpired [yesterday]. I have never lived through or even imagined an experience like the one we have just witnessed in this Capitol. President Franklin Roosevelt set aside Dec. 7, 1941, as a day that will live in infamy. Unfortunately, we can now add Jan. 6, 2021, to that very short list of dates in American history that will live forever in infamy.

The aforesaid Nancy Pelosi labels the present situation “an emergency.” She is yelling for impeachment — a second impeachment.

Should impeachment fail, and if the president digs in… she advises Vice President Pence to invoke the 25th Amendment to the United States Constitution.

Many others are with her.

Our agents inform us Mr. Pence is sweating dreadfully under the heat… but that he will stay quiet.

The president will serve his full four years. The show will run through January 20.

Yet some demand he be clapped into jail for his seditions — there is a vacant cell in Guantanamo Bay, they note.

This we mention only in passing. A jailing is highly unlikely.

But today the president finally struck his colors… and in essence conceded the election. He pledged a peaceful power transfer — and on the date appointed:

Even though I totally disagree with the outcome of the election, and the facts bear me out, nevertheless there will be an orderly transition on January 20th.

As a patriotic American whose heart beats true ‘neath red, white and blue… we are pleased beyond description that peace will prevail.

We are nonetheless disappointed the show is ending. It has been immensely entertaining. But the curtain drops on every show.

The White House will be tremendously dull without his roars.