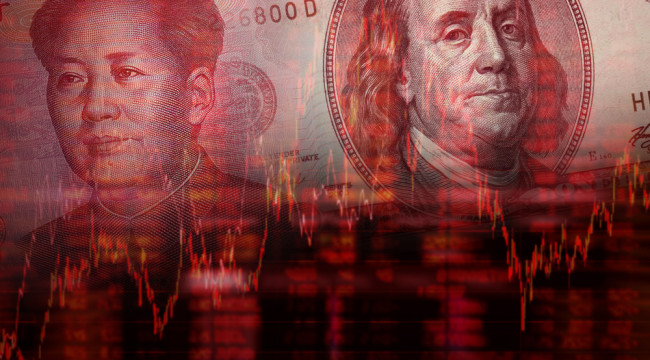 "We're Now Just One Big Shock Away from a Global Downturn..."

DUBLIN – Most elections these days are contests between cronies and zombies.

In yesterday’s presidential elections in Argentina the zombies lost.

It’s time for the cronies to take over.

More on that tomorrow…

We have been fixing the outside walls of an 18th-century stone farmhouse in Normandy, France.

The farmhouse wall… before and after. We use a miniature jackhammer to chisel out the cement. Then we replace it – filling the joints with a mixture of lime and sand, just like they did in the old days.

Back in the 1960s, 1970s, and 1980s, people thought they were doing these old buildings a favor by modernizing them, often covering them with cement. It was harder, more water resistant, and longer lasting than old-fashioned lime-and-sand mortar.

Later, they discovered cement didn’t allow the building to breathe. Moisture rose up from the ground and couldn’t get out. The limestone used to build the house decomposed. Inner walls were humid. Outer walls crumbled.

Until this past weekend, we were fixing the fixes – repairing the house with the materials and techniques that were used to build it in the first place.

But now, the nights have turned frosty. You can’t work with cement or lime when the temperature gets close to freezing. So, we will have to wait until spring to finish the job.

Besides, it’s time to head back to the U.S. for Thanksgiving. We’re traveling today, so ourDiary will be shorter than usual.

The financial news continues to confound and confuse investors. The Fed is telling one story. The world economy is telling another.

The Fed is talking about increasing the federal funds rate – eventually getting rates back to “normal” – because the U.S. economy is so healthy. Meanwhile, the world heads toward deflation.

We are now just one big shock away from a global downturn, and the next one seems most likely to originate in China, where heavy debt, excessive investment, and population decline are combining to undermine growth…

But it looks to us as though the global downturn is already here.

First, the Baltic Dry Index is at a record low. Here’s Bloomberg with the full story:

The cost of shipping commodities fell to a record, amid signs that Chinese demand growth for iron ore and coal is slowing, hurting the industry’s biggest source of cargoes.

The Baltic Dry Index, a measure of shipping rates for everything from coal to ore to grains, fell to 504 points on Thursday, the lowest data from the London-based Baltic Exchange going back to 1985.

In October, construction and mining equipment maker Caterpillar posted another month of falling sales – making it 35 in a row.

The latest figures reveal something new, too. Sales are now dropping in the U.S. as well as overseas.

U.S. corporate profits have also begun falling. And earnings per share (EPS) – a key measure of profitability that looks at the portion of companies’ profits allocated to each outstanding share – are falling too.

Average third-quarter EPS for S&P 500 companies has fallen by over 2% from the same quarter last year. And this figure would be even more disappointing if it weren’t for their massive share buyback binge (which, by reducing the number of outstanding shares, increased the earnings that accrue to each share).

According to Citi Research, since 2004, S&P 500 companies have spent 2,848% more money buying their own shares than investors have moved into the stock market.

With corporate debt levels now more than double their pre-crisis levels, this all could have a big impact on corporate bond default rates… especially if the cost of carrying all that debt goes up.