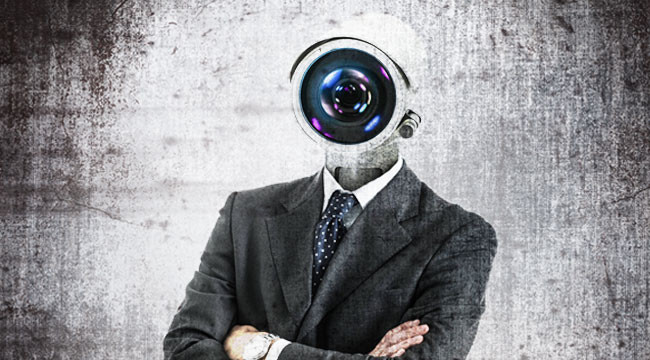 In the last several days, I’ve had three phone conversations with friends — completely normal people who have their wits about them — during which they have declined to say something for fear of government surveillance. They will be talking normally and suddenly catch themselves and divert the conversation.

The topics we were discussing were mostly innocuous, and I can’t imagine that government interlopers would care, but the impulse to self-censor was triggered anyway.

Free becomes unfree. Fear replaces liberality. Open communication becomes censorship. The curtain is falling fast on free speech. It’s happening all around us, and it is getting worse every day.

The first time I had this happen was about one year ago, when I was talking to a soldier stationed at a military base. He spoke to me almost in code, fully certain that his conversations were being monitored simply because he was speaking from a government facility. The phone was his, but he had the sense, which he probably couldn’t prove, that the lines of communication were not safe.

That genuinely alarmed me. But at the time, I thought it was just because he was at a military base. A bit of paranoia is understandable, and maybe this is just what one would expect. But it turns out that this was just the beginning. The whole country has turned into a military base, and everyone in the know is acting like that soldier did only one year ago.

It’s been true on email too. Increasingly, people are writing in frozen and stiff ways, presuming that someone else is reading. The same has happened in Facebook public postings and online chats. I’ve noticed, just in the last weeks, a reduction in the heat of postings, a fall in the level of zip, a new caution in the mode expression. Across the board, public digital spaces have become chilled.

What a difference one month makes. A leaker from the National Security Agency came forward with a version of events that hardly anyone could believe at first. It seemed outlandish to imagine that the government had a direct pipeline into all our communication portals, mining as much data as possible and building ever larger facilities to gather and hoard it, keeping it around for when it is necessary.

Surely, this man Edward Snowden is just a nut. But in the weeks after his revelations, we all began parsing the statements of denial from the likes of Google, Yahoo, Facebook, and Verizon. Then it became really apparent that these people were not even allowed by law to tell the truth. They were writing while concealing. They were trying to be forthcoming, but were not free to speak even if they wanted to. They had been ordered not to speak.

But what were they going to do about it? Shut down their businesses? Well, some smaller businesses have shut down rather than comply with the demands that they allow nonstop streaming of data to government headquarters. And get this: Ladar Levison of Lavabit was actually threatened with criminal charges for having shut down his services rather than comply.

Levison had previously complied with specific court orders for information from individuals, but the day he saw a demand for a full-blown “backdoor” to his system, he shut it down. The government then accused him of “violating the court order” for declining to do business. This amounts to a kind of nationalization of his small business — a mandate that he serve the state through his own property or else face prison time.

It’s impossible for me to look at all of these events and not see the most profound irony. I’m a child of the Cold War, a time when the civic morality play pitted the free speech and free thought of the United States against the controlling, censoring, authoritarian wickedness of the communist system operating in the Soviet Union and its satellites. It was a story of good and evil. We were good and they were evil, and the daily fear experienced by the unfortunate citizens of those countries served as the ultimate proof.

I guess I learned the lesson well, because I can’t shake that sense of good and evil from my mind. The United States won the Cold War, but its government gradually came to adopt the very practices that we demonized at that time. Who conquered whom here? Freedom was supposed to have been the victor, but today, Edward Snowden had to be given sanctuary in Russia, of all places, just for having revealed uncomfortable truths about what the U.S. government is doing to its own citizens.

They say it’s all about stopping terrorism. Well, oddly, security is precisely how censorship was justified in the old Soviet days too. The government had to be given access to all communication in order to protect the people from miscreants and enemies within the body politic or else everyone would suffer some terrible fate. To be on the side of free speech was considered an act of treason. So it is today in the great home of freedom.

It’s helpful to consider the bigger picture here. All governments in all times and places have aspired to control the communication of their citizens. In the United States, the government did in fact maintain its control for the greater part of American history. The radio waves were nationalized and controlled. Mail was a government service. The government enforced a strict monopoly over television for decades. Even the telephone system was a government monopoly — handsets and telephone cords were issued and owned by an agent of the state.

In the course of only a few decades, everything unraveled. The telephone monopoly was busted. Cable television was born. Censorship over the radio began to loosen. Then technology took over and there were cellphones, email, private delivery services, chat, hundreds of millions of websites anyone could start, Voice over Internet Protocol, and more forms of communication than government could possibly keep up with. The monopoly over communication that the government once maintained had been completely smashed.

This situation has persisted for about 15 years — a near-anarchist paradise of human sharing and interaction through technological innovation. What’s going on today is really the reaction and response by the elites. They want their power and control back. They are trying to get it through the oldest form of government control surveillance and the blackmail that comes with it. It’s the tactic guards used to control prisoners. It’s the tactic government is using to fight its way back toward having control over our lives.

So as you consider the alarming trends, the first thing to remember is that this approach is nothing new. To surveil the citizens is something governments from the ancient world to the present have aspired to do. It outrages us, and rightly so, but it shouldn’t surprise us.

The chilling effect is intensifying, and serious damage has already befallen the digital spaces we’ve come to love. Over the long run, however, this approach is not going to work. Try as it might, the government will not stop communication innovation. Private entrepreneurs are busy innovating ways to keep the history of our times on the side of human liberty.

The desire to communicate even when government doesn’t want us to is part of the American genetic code. “One if by land, and two if by sea,” says Longfellow’s poem about Paul Revere’s ride to inform citizens about British troop movements. It was encryption in the style of the 18th century. That generation didn’t give up on the freedom to communicate, and neither will we.

Where Candidates Fear to Tread