The United States government, alas, is embarrassed for funds.

More money is going out the back door than is coming in the front.

So today Uncle Samuel holds his hat before the bond market… requesting to borrow $329 billion through September… and $440 billion by December.

Sixty-three percent higher, these numbers are, than the Treasury’s borrowings for the same period last year.

And this year’s debt spree promises to be the greatest since the depths of the financial crisis.

Unemployment is all but licked, we are told.

In a season of plenty, even the Keynesian prayer book preaches a gospel of fiscal restraint.

It is the time to gather acorns… to save against a time of lean kine… to lay up against the rainy day.

When recession inevitably arrives, the government can then meet the emergency with a full strongbox.

But even the old Keynesian religion has gone behind a cloud…

In its place we find “New Age” fiscal policy — the religion of perpetual deficit.

But now we seem to have turned that logic on its head, with fiscal stimulus ramping up in the best of times, when unemployment is low, stock prices high and inflation stirring. New Age fiscal policy seems to call for continuous and growing deficits pretty much forever.

“Never in modern times,” warns analyst Sven Henrich, “have we seen tax cuts being implemented and spending increased with debt to GDP north of 100%.”

The reasons for the new deficit spending come in two inseparable parts:

Two, the Trump tax cuts that limit the government’s wherewithal to fund it.

The Office of Management and Budget projects trillion-dollar deficits for the next four years — at least. 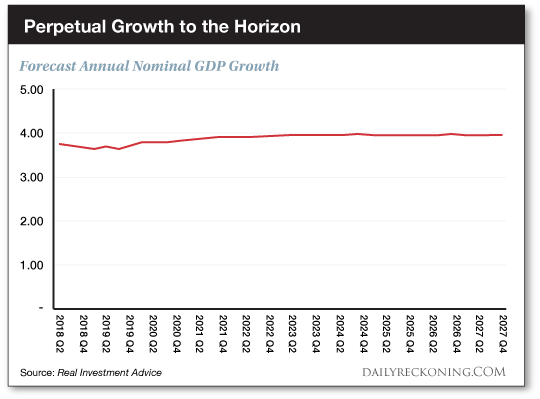 But CBO’s forecast has a fatal hole in it…

At 108 months, the current “expansion” is the second longest in U.S. history.

By next July it will become the longest ever — if the gods are kind.

Can the economy peg along another four years without a recession?

Or even half so long?

In the likely event of recession — depend on it — the spending floodgates will be thrown open.

“We get a recession,” affirms the aforesaid Henrich, “and you are looking at $2–3 trillion [annual] deficits.”

“A deficit explosion,” he styles it.

Here is our prediction:

Recession will likely fall within a year or two.

Deficit spending of the kind described will come issuing forth in full spate.

Because only substantially greater rates will be able to lure investors at that point.

If $2, 3 or 4 trillion of additional debt needs to find a home, it is quite likely that interest rates would rise sharply to attract new investors. Plus, there is one other small problem. As interest rates rise, the interest expense on the debt increases and drives funding needs even higher.

Here he knifes to the heart of the dilemma — rising interest expense on existing debt.

Rising debt service will likely lower the curtain on the entire show, as rising borrowing costs overwhelm the economic machinery.

Could interest on the debt alone total $1 trillion per year?

The math is the math.

And we would remind that 5% interest rates are well within historical norms.

At that point the New Age fiscal policy would come crashing upon the rocks of actuarial fact.

A 40% plunge in the stock market — or more — cannot be excluded.

Meantime, the recovery is eight years old… and counting…

Below, Jim Rickards shows you why “all signs” point to a global slowdown. Is the Fed prepared? Read on.