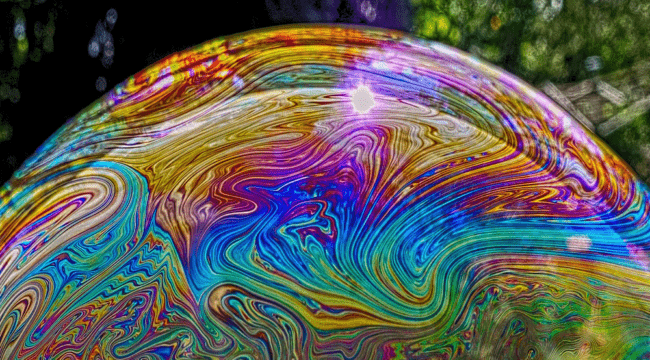 Allow me to summarize the dominant zeitgeist in America at this juncture of history:

Grab yourself a big gooey hunk of happiness by turning a few thousand bucks into millions — anyone can do it as long as they visualize abundance and join the crowd minting millions.

Beneath the bravado and euphoric confidence in our God-given right to mint millions out of chump change, a secret plea lurks unspoken: Please don’t pop our precious bubble!

The big gooey hunk of happiness available to all depends on one special form of magic spell: If we don’t call the bubble a bubble, it won’t pop.

And so Wall Street shills spew endless “research” (heh) proclaiming that the forward price-earnings ratio of 21.1 will only slightly exceed past norms, and so on — in summary:

If we don’t call the bubble a bubble, it won’t pop.

Everyone’s All in on the Everything Bubble

What differentiates this bubble from the 1720 South Sea Bubble, the 2000 dot-com bubble or the 2007–08 housing bubble is: This bubble includes every asset class and has sucked the entire populace and economy into its magic maw.

The bubble has swept up housing, stocks, junk bonds, commodities, cryptocurrencies, NFTs and numerous collectibles — the bulk of America’s household assets are now firmly lodged in the maw of the Everything Bubble.

Here is a sampling of recent headlines in America:

My Cat Turned $6,000 in My Robinhood Account Into $6 Million by Walking on My Keyboard

I Turned $100 My Aunt Gave Me for My Birthday Into $6 Million in One Trade, Buying Way Out-of-the-Money Calls on a Meme Stock

OK, so these are slight exaggerations, but the zeitgeist is very real.

Of all the mass delusions running rampant in the culture, none is more spectacularly delusional than the conviction that we can all get fabulously rich from speculation while producing nothing.

The key characteristic of speculation is that it produces nothing: It doesn’t generate any new goods or services, boost productivity or increase the functionality of real-world essentials.

Like all mass delusions, the greater the disconnect from reality, the greater the appeal. Mass delusions gain their escape velocity by leaving any ties to real-world limitations behind and by igniting the most powerful booster to human euphoric confidence known, greed.

Lost in the mania of easy wealth from speculative trading is the absence of any value creation in the rotation churn of moving bets from one table to the latest hot game:

In flipping houses sight unseen, no functionality was added to the house. In transferring bets on one cryptocurrency to another or from one meme stock to another, no value to the economy or society was created.

In the mass delusion that near-infinite wealth can be generated without producing anything, creating value has no value: The delusion is that I can get rich producing nothing but speculative gains, and then I can buy all the stuff somebody else is making.

Work Is for Suckers

The fantasy powering the speculative frenzy is once I get rich, I’ll stop working and live off my wealth. It’s interesting, isn’t it, how everyone can get rich via unproductive speculation, quit their jobs and then live off the productive work of somebody else who failed to get rich off speculation? The Great Illusion.

Maybe that’s why all the containerships are lined up at Long Beach, waiting to unload the goodies made in China for American speculators to buy.

This is what happens when the incentive structure of the economy decays so that being productive has little upside (i.e., working is for chumps) while speculating is all upside (get rich quickly and easily).

Bone up on your history, Bucko; all great nations got there by quitting boring, tiresome productive work to speculate on illusions of value with borrowed money.

A System That Optimizes Corruption

This is the result of monopolies and cartels becoming the financial and political power centers of the nation.

They end up treating employees as chattel to lower costs, offshoring critical supply chains to squeeze out a few more dollars of profits, engineering products to break down (planned obsolescence), buying regulatory barriers and “free passes” and tax breaks galore with all the billions showered on financiers and other fraudsters by the Federal Reserve.

In a word, a system that optimizes corruption.

This is how you hollow out a nation and guarantee collapse. The most rewarding “skill sets” are a sociopathological obsession with maximizing profits by any means available and speculating with Fed free money for financiers.

The millions of “retail” speculators are simply picking up the cues being given by the billionaires who gained their wealth by issuing debt to fund stock buybacks and other financial manipulations.

First, borrow billions thanks to the Fed and Wall Street, destroy the competition (for example, the taxi industry) and then, once the competition has been wiped out, jack up prices because now consumers have no choice other than another member of the cartel.

By incentivizing speculation and corruption, reducing the rewards for productive work and sucking wages dry with inflation, America has greased the skids to collapse. As with all mass delusions, the incentives to continue believing are immense, and the incentives to reconnect with reality are few.

So in conclusion: The speculative gains to be made in the collapse of the mass delusion will be spectacular. There’s nothing like the collapse of a hollowed-out, completely corrupt economy to generate outsized profits for nimble speculators.

Just keep your speculative winnings on Number 22 on the roulette wheel. (A Casablanca movie reference….)