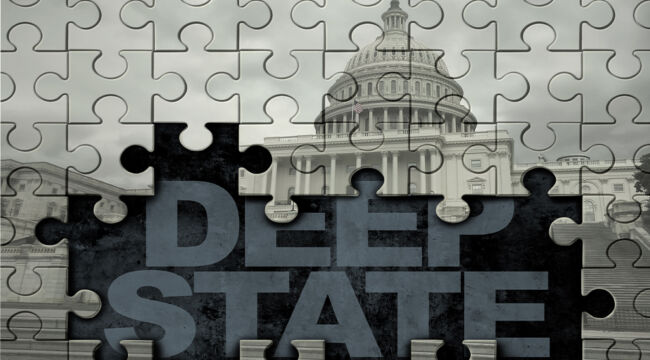 We, the Deep State

To be governed — observed 19th-century philosopher Pierre-Joseph Proudhon — is to be:

The question then arises: Who governs We, the American people?

The people are the government, say the civics books. We are the superior partners in a master/servant relationship.

We are masters. Officials we elect are servants.

It is a beautiful theory. Yet careful analysis reveals the American people in fact wield limited influence over their affairs.

Imagine a football field, 100 yards in length. The American people are allowed merely within the two 40-yard lines.

The remaining 80 yards range beyond their effective control.

It is they who primarily boss us, loot us, hagride us, menace us and boss us.

In brief, it is they who govern us.

They do not. And do not forget: Dr. Fauci was a near Caesar during the pandemic.

More recently, where was the public squealing to dispatch $56 billion to Ukraine?

And does a sparrow fall anywhere within these United States — as it was once known — that escapes their suspicious eye?

A Perversion of the Constitution

You will discover that the original constitutional anatomy is scarcely recognizable.

We lift our pocket Constitution from our breast pocket, for example, where it is permanently stationed — near our stony heart…

We thumb to Article II, which limits presidential powers to:

Where does the Constitution authorize the president to:

Require Coronavirus Disease 2019 Vaccination for Federal Employees… to Protect Access to Reproductive and Other Health Care Services… to Ensure Responsible Development of Digital Assets…to Strengthen the Nation’s Forests, Communities and Local Economies… to Prohibit New Investment in and Certain Services to the Russian Federation in Response to Continued Russian Federation Aggression… to Protect Public Health and the Environment and Restore Science to Tackle the Climate Crisis… to name some?

These are but some of the 95 executive orders President Biden has signed to date.

Are these not the prerogatives of the legislative bodies — of our elected representatives? Under which constitutional provision does the president exercise these powers?

Certainly not under Article II.

We sling our arrows not at the sitting president alone. His predecessor issued 220 of his own. Roosevelt — Franklin Delano — issued a dictatorial 3,721.

Meantime, Washington issued eight executive orders in all eight years of office. Adams issued one in his term, Jefferson four.

The number of executive orders has swelled to undemocratic and nearly obscene dimensions as the administrative state barreled through the Constitution’s “parchment barriers.”

That is because the parchment barrier of the Constitution never could restrain men determined not to be restrained.

A word about former President Trump is in order…

We are not an enthusiast of Mr. Trump. We find much of his economics badly informed, for example. In certain instances, we find them atrocious.

More importantly, we believe he failed in his central duty…

Candidate Trump was elected not as statesman, but as a sort of destructionist — a sapper planting dynamite beneath ruling-class trenchworks, beneath the “deep state” fortifications that ring the nation.

The fellow nonetheless did the nation an inestimable good, a supreme magnificence for which it should be staggeringly grateful. How?

Trump renewed distrust, that is, of institutions and elites (noun, not adjective) that run them.

Trump renewed American distrust — that is — of the “swamp.”

Like the lawman smoking crooks out of their safehouse, Trump flushed the swamp monsters out of the murk… and exposed them to the public gaze.

How many Americans were familiar with the term “deep state” before Trump?

Now the term has entered the popular vernacular.

Most Americans likely held the Federal Bureau of Investigation in high regard prior to 2016.

But after the massively discredited Steele dossier and “Russiagate”? After the recent raid on Donald’s private residence — the first ever raid on a former president’s home — and likely future presidential candidate?

Many Americans would trust a dog with their dinner before they would trust the FBI with the law.

Before 2020 how many Americans questioned the Centers for Disease Control before… or the National Institute of Allergy and Infectious Diseases?

Prior to Trump Americans had largely forgotten the fundamental question of the Roman poet Juvenal:

“Who will guard the guards themselves?”

Millions of Americans presently have sharp eyes on the guards.

And does the mainstream media retain one tattered rag of credibility?

The Trump presidency revealed the media’s monomaniacal hatred for the man, a hatred with the heat of 2,000 suns.

All standards of objective journalism went emptying into the hellbox.

Meantime, social media excommunicated Trump and legions of his enthusiasts — often for harmless and inoffensive blabberings.

Add them one with the other… and the American people are now on their guard.

Justice Must Be Blind

You may hold Mr. Trump in the deepest contempt. You may therefore applaud the clandestine machinations of the FBI and Justice Department to undo this satan.

We would replace the blindfold that has been stripped from the eyes of Lady Justice. Perhaps Trump’s example expedites the process.

And so we lift our modest hymn in praise of Donald John Trump.

He pulled back the curtain on the “deep state.” He exposed their mischiefs before a previously disinterested and unwatching public.

We blast no trumpet for the fellow or his personal character. He is… flawed. But it makes no nevermind.

Ironically, this “anti-democratic dictator,” the scourge of all democracy-drummers among us…