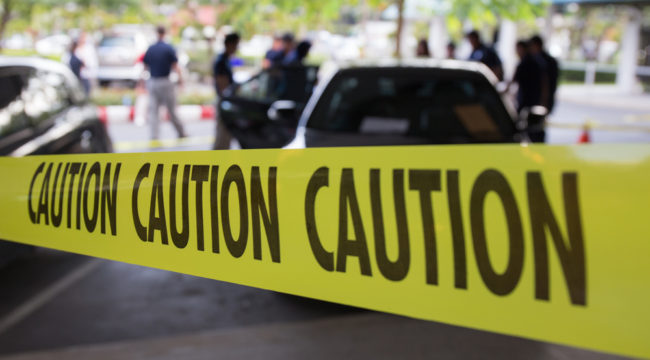 According to one Charlie Bilello, director of research at Pension Partners LLC, that event was such a one-off, such a purple unicorn, it was “simply not ever supposed to happen, in the history of the universe.”

Flip a coin 1,000 times. It should turn up heads about half the time. If it’s heads 537 times, say, it represents a standard deviation from the average. 618 times is another. But what if it’s heads 969 times out of 1,000? Then you’re in the Twilight Zone. You’re so many standard deviations from the average, you may conclude God “loaded the dice,” to stick with Einstein.

Bilello says the likelihood of even a five-standard deviation event is “essentially zero” on any given day, based upon probability theory.

Seventeen standard deviations means it never should have happened once in 4.6 billion years. But it did on that October day in 1987. Was God out for mischief that day? Or are markets somehow more susceptible to “black swans” than the laws of chance suggest? Maybe the latter…

Again, Bilello: “[Markets] operate in the world of fat tails, exhibiting large skewness… This is a fancy way of saying extreme events (high-standard deviation or “sigma” moves) are much more likely to occur than a normal distribution would predict.”

Jim Rickards pioneered the study of complexity theory and its applications to markets. His conclusion? Markets are indeed more susceptible to “black swans” as their complexity increases:

One formal property of complex systems is that the size of the worst event that can happen is an exponential function of the system scale. This means that when a complex system’s scale is doubled, the systemic risk does not double; it may increase by a factor of 10 or more… This kind of sudden, unexpected crash that seems to emerge from nowhere is entirely consistent with the predictions of complexity theory. Increasing market scale correlates with exponentially larger market collapses… As systemic scale is increased by derivatives, systemic risk grows exponentially.

Jim points out the skunk in the woodpile: derivatives. Derivatives are securities based on — “derived” from — the value of an underlying asset. A stock option is a derivative, for example, because its value is derived from the underlying stock. They’re used to hedge investments or to speculate. When enough of these bets go wrong, the entire financial system can collapse.

With its tentacles extended throughout the world like a global grapevine, Deutsche Bank presents “systemic risk.” In fact, the IMF declared last month that Deutsche Bank poses the greatest risk to global financial stability.

Consider that Lehman Bros. was leveraged 31-to-1 before its 2008 collapse. Deutsche Bank is now leveraged over 40-to-1.

TheStreet’s Chris Vermeulen warns the next time “could be exponentially larger than Lehman’s.”

Jim Rickards sees that black swan through his binoculars: “Deutsche Bank is in trouble. They’re not quite at the stage where they need to be bailed out yet. But they might be getting uncomfortably close.”

[One] institution that is… a ticking time bomb due to its extreme derivatives exposure is Deutsche Bank. As one of several very large global and systemically important multinational banks, Deutsche Bank’s balance sheet has more of what Warren Buffett decried as ‘financial weapons of mass destruction’ than any other bank on the planet.

Meanwhile, the global bond bubble now is a staggering $100 trillion. And over $500 trillion in derivatives trade is based upon bond yields. If that bond bubble bursts…

Today the global derivatives market is much larger than it was in 2008. And with Jim Rickards’ “complexity multiplier,” could it be that the risk is not just higher… but exponentially higher?

“Globalization… creates interlocking fragility,” says author and statistician Nassim Nicholas Taleb, “while reducing volatility and giving the appearance of stability. In other words, it creates devastating Black Swans. We have never lived before under the threat of a global collapse.”

Now we do. And thanks to derivatives, the threat looms larger than ever.