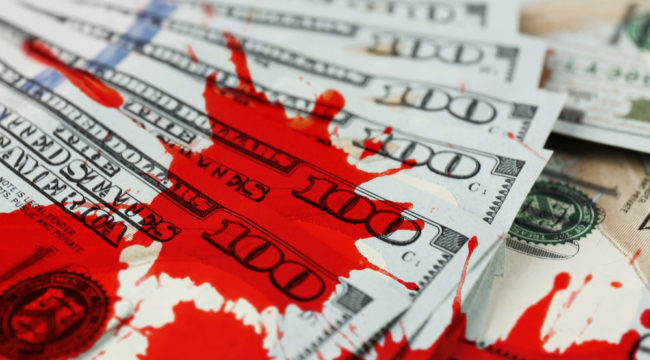 The War on Cash Just Escalated

I’ve been warning investors for months about the war on cash.

This war has been in full swing in Europe and the U.S. for a long time. Governments plan to use negative interest rates, confiscatory taxes and other techniques to rob savers of their wealth. In order to do this, they have to force savings into digital accounts at large government-controlled banks.

As long as savers can hold cash, they can avoid many of these confiscation techniques. Therefore, governments must eliminate cash.

The latest battleground in this war is India. In a shock announcement on Nov. 8, India declared that 500- and 1,000-rupee notes are no longer legal tender. Imagine that — the money in your wallet or purse is instantly made worthless by government decree. That’s what happened.

There were limited exceptions for hospitals and gas stations. Naturally, gas lines formed everywhere, and some people rushed to hospitals to prepay for future medical care with now worthless bank notes. The other exception to worthlessness was if you deposited the notes in the bank.

There you would receive “digital credit” in your account. Of course, the tax man was waiting at the bank to ask you where you got the money. Those without an acceptable answer can expect trouble from the Indian Revenue Service. this is not the end of the war on cash. It’s just the beginning.

India’s decision is having devastating ripple effects in the Indian economy and the market for gold. The consequences of the decision are both appalling and encouraging — appalling because they show governments’ ability to destroy wealth, and encouraging because they show the ingenuity of individuals operating under the thumb of an oppressive government.

One immediate consequence is that paper money began trading at a discount to face value. In plain English, you might be able to sell your illegal 1,000-rupee note to a middleman for 750 rupees in smaller denominations. You would get legal tender for your worthless 1,000-rupee note.

This is the first time I’ve ever seen cash trading at a discount (although I did predict this development in Chapter 1 of my new book, The Road to Ruin,released Tuesday).

By Friday, Nov. 11, the entire banking system in India was beginning to run out of cash and alternative forms of payment such as gold and barter were emerging. Don’t think of this as something that happens only in poor countries. Similar scenes will play out in the U.S. and Europe as elites become more desperate to take your money.

There’s a lot else going on that is aimed at destroying your wealth to solve the global debt problem. I write about these developments in issues of Strategic Intelligence.

The war on cash has two main thrusts. The first is to make it difficult to obtain cash in the first place. Coming back to the U.S., banks will report anyone taking more than $3,000 in cash as engaging in a “suspicious activity” using Treasury Form SAR (Suspicious Activity Report).

The second thrust is to eliminate large-denomination banknotes. I just described what’s happening in India. The U.S. got rid of its $500 note in 1969, and the $100 note has lost 85% of its purchasing power since then. With a little more inflation, the $100 bill will be reduced to chump change.

The war on cash is old news, but it’s picking up. Earlier this year the European Central Bank announced that they were discontinuing the production of new 500 euro notes (worth about $575 at current exchange rates). Existing 500 euro notes will still be legal tender, but new ones will not be produced.

Another solution to negative interest rates is to buy physical gold. But if the government has a war on cash, can the war on gold be far behind? Probably not.

Guess what? An article on the topic of criminals using gold just appeared this May in Bloomberg. This is one more reason to get your physical gold now, while you still can.

As if inflation, confiscation, and negative rates weren’t enough, the global elites are coordinating a new plan for global taxation. As usual, there’s a technical name for global taxation so non-elites won’t understand the plan. It’s called base erosion and profit shifting, or “BEPS.”

That’s the global elite plan. World money, world inflation and world taxation, with the IMF as the central bank of the world, and the G-20 Leaders as the Board of Directors. None of this is secret. It’s all hiding in plain sight.

This will be playing out in the next few years.