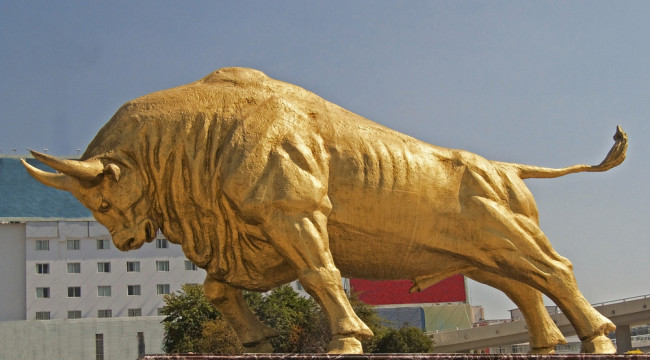 War and the Return of the Gold Bulls

Gold demand is rising again… this time, to the beat of war drums. Gold futures finished 2% higher last week, surging nearer to bull market territory as charted by the Comex. Investor jitters over an apparently imminent U.S. strike against Syria are running again for safety in an uncertain world.

We could have sworn we were told by the high priests of finance that the gold bull market was over last April. Gold fell all the way to the $1,100 range, and the gold bugs were officially declared legally insane for hanging on. It’s now clawed its way back to the $1,410 range… and the bombs aren’t even dropping yet. Imagine what will happen if Iran makes good on its promise to strike Israel in response…

Legendary investor and Daily Reckoning contributor Jim Rogers spoke recently to Tara Joseph of Reuters, noting that gold will go “much higher” due to market panic over Syria and the “end of free money.”

“I own oil, I own gold, I own things like that, and if there is going to be a war, and it sounds like America is desperate to have a war, they’re gonna go much, much higher. Stocks are gonna go down, some of the markets that I’m short are already going down, commodities are gonna go up. I mean, yeah, some of the things I own all make a lot of money. I’m not particularly keen on war, I assure you, but it sounds like they want it.”

Rogers is expecting panic to ensue from tapering as well. “When this artificial sea of liquidity ends, we’re gonna see panic in a lot of markets, including in the U.S., including in West developed markets… this is the first time in recorded history that all major central banks have been flooding the market with artificial money printing at the same time. They’ve all been trying to debase their currencies at the same time.”

The lesson here for investors: If you think gold is over with, you have evidently forgotten about politics. No matter how bad it looks, someone in Washington will end up making gold investors wealthy again.

P.S. Check out our chart reader Greg Guenthner’s three predictions for market fallout in Syria. Subscribe to The Daily Reckoning email edition and get the inside scoop. Click here.