That is, Wall Street is nearing “full bull.”

We might add a four-letter scatological conclusion to “bull”… yet our harsh Presbyterian standard forbids it.

The latest Fund Manager Survey is out. That is a monthly barometer of roughly 200 fund managers throughout Earth.

And this barometer indicates fair winds and clear skies ahead.

66% of the surveyed believe the global economy is in “early-cycle phase.” That is the highest barometric reading since March 2010.

84% expect an upswing in global growth — the highest percentage in18 years.

73% project a steeper yield curve. That is a record high reading.

In reminder, a steeper yield curve foretells higher growth ahead. A flattened yield curve indicates the opposite.

The global equity markets rebounded on the back of improving macros, the U.S. election outcome and hopes surrounding a potential Covid-19 vaccine. Cash levels have declined to 4.1% in November from 4.4% in October and 4.8% in September, the survey of a total of 216 panellists with $573 billion assets under management showed. Cash level of less than 4% indicates greed and over 5% fear.

In March… in the razor teeth of the pandemic… CNN’s “Fear and Greed” index had plunged to 2 out of 100 — “extreme fear.”

The same index presently reads 72  — “greed.” Any reading above 75 ranges into “extreme greed.”

For investors, the nightmare march through the dark, treacherous valley is over. And the wide, sun-soaked uplands are in eyesight.

Thus an arctic chill freezes our spinal column… and cold sweat streams down our ashen face.

It’s the Good News We Worry About

For as we have noted before: Bad news frightens us — but good news terrifies us.

Too many hopes go up, too many guards go down, too many fools go in, too many “buy, buy, buys” go out.

But when a crowd bunches together, we instinctively quicken step… and beat a course for the exits.

That is because crowds make us vaguely uneasy. Unsettled. Anxious.

This bullish crowd particularly flusters us. For it gathers around the narrative of “improving macros.”

Yet we direct you to the following photographs, taken this prior weekend…

These images depict thousands of automobiles, horizon to horizon, a convoy of the hungry, creeping towards a food bank in Dallas, Texas. 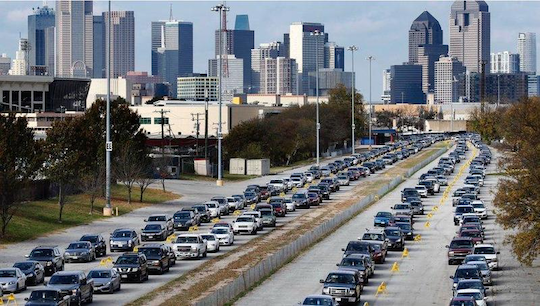 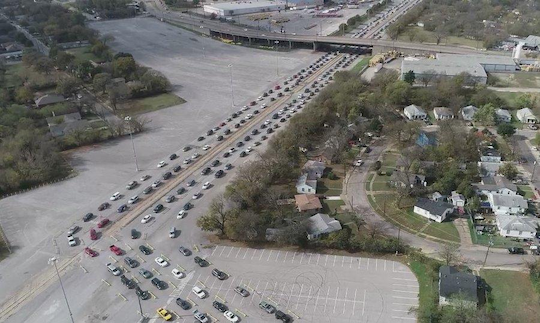 Are these the images of improving macros?

Incidentally, our understrappers inform us that internet searches for “drive thru food bank near me” are overloading the circuitry.

Lest doubt remain — the stock market is not the economy.

Meantime, pre-pandemic unemployment sunk to record lows of 3% or less. It went rocketing to 14.7% in April (likely higher) as millions were thrown from their jobs.

Today the official rate hovers at 6.9%. Yet additional lockdowns loom — and fresh issuances of pink slips.

To steal a possible glance into the future… we look to the past recession, the 2008 recession.

United States employment did not fully recover for 76 months — over six years.

Pre-pandemic unemployment levels would return in 2026.

They may return sooner than 2026 of course. Yet they could return later than 2026.

It is our sincere wish that these industries emerge intact — and sooner than we fear.

Yet we are not half so convinced they will.

Meantime, today’s debt burden sits far heavier on the economy than in 2008. And debt drags on an economy as a millstone hung about a man’s neck drags on the man.

Total pre-pandemic debt levels already ran to $75 trillion or some other enormity. And debt is piling on by the heap, by the load, by the bushel.

Headway will therefore be limited, the sledding difficult.

These two gentlemen tie up to this conclusion:

“The economic growth rate going forward may be half of the already weak pace heading into the (2020) recession.”

It represents businesses that will never do a lick of business.

Yet a string of annual slack growth is not…

Jim Rickards estimates the United States would be at least $4 trillion wealthier today.

The first man is the more pitiful of the two… for he knows what he has lost.

The second man cannot miss what he has never known.

Unless existing trends reverse, the United States may one day feel the sting…