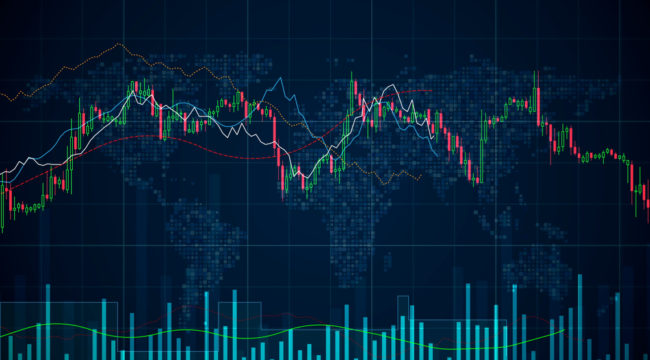 Stocks mounted a heroic charge yesterday… like cavalry answering the bugle at a desperate moment.

The bears threw down their arms… and took to their heels.

The Dow regained 567 points when the smoke cleared yesterday afternoon.

The major averages opened higher again this morning… before the bears counterattacked later in the day.

The Dow, the S&P, the Nasdaq, all ended the day down double-digits.

Shell-shocked investors remain hunkered in their foxholes, wondering when it’ll be safe to come out.

Today we reconnoiter the battlefield… and assess the opposing forces…

Yesterday we blamed the pullback largely on spiking volatility.

It was the largest one-day VIX spike in its history, a history tracing officially to 1993.

This sharp rise triggered the computers to sell… and the Dow plummeted 900 points in 15 minutes.

The pair studied market results one week… one month… and three months after the 10 largest VIX spikes.

The initial short-term reaction has been for markets to actually display a more risk-on tone with the median S&P 500 return being 3.9% in the week after (there’s only been two instances where the S&P 500 actually fell).

If we can expect a 3.9% return by Monday the S&P ended yesterday on cue…

But tomorrow and Friday and Monday await.

How about one month after a massive volatility spike?

The results are… less encouraging:

The median S&P 500 return in the one month… following a huge vol spike is negative 0.4%.

Equities tend to be strong the week after but on average fall three months later.

A note to keep on file… and we intend to.

Comparisons between this Monday and Black Monday are overwrought.

And VIX, today’s recognized measure of volatility, did not exist in 1987.

But the Chicago Board of Options Exchange has attempted to “reverse engineer” volatility readings for that period.

At the inkiest depths of Black Monday, they conclude volatility spiked at 150.

Recall, VIX “only” topped 38 this Monday.

And the Dow recovered 60% of Black Monday’s losses in the two subsequent trading days: 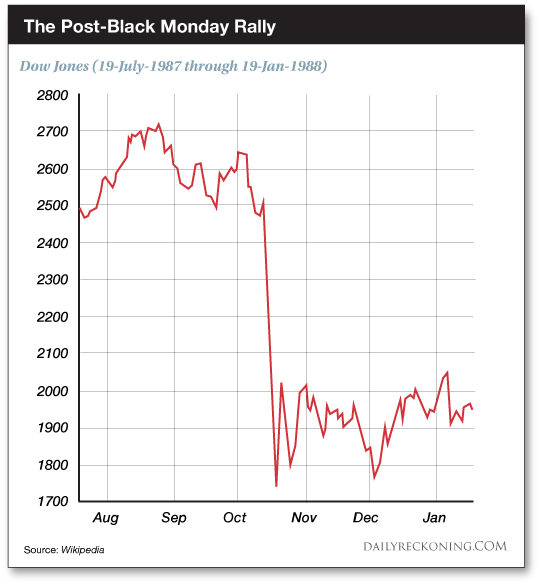 Yesterday’s recovery should therefore not surprise.

In that context, perhaps today’s failure to extend yesterday’s gains should surprise.

Will markets sink lower in two months… or three?

We hazard no position whatsoever.

We hazard only that both are possible.

But famed investor Carl Icahn is on board with Deutsche Bank…

The recent volatility spike places Icahn in the role of short-term Pollyanna — and longer-term Cassandra:

But if you seek the day, hour and minute of the earthquake… Mr. Icahn, alas, offers little light.

It “could be five years,” says he.

Or it “could be five months.”

But can we assume that the false peace of ultra-low volatility is over?

“Volatility is back,” say David Lafferty and Esty Dwek Roditi of Natixis Investment.

“We need to get comfortable with the idea of uncertainty because it’s not going away,” says HMG Strategy CEO Hunter Muller — with certainty.

But that is an uncertainty we can live with.

Madness is the result not of uncertainty, said Nietzsche, but of certainty.

We therefore welcome the return of uncertainty with outstretched arms…