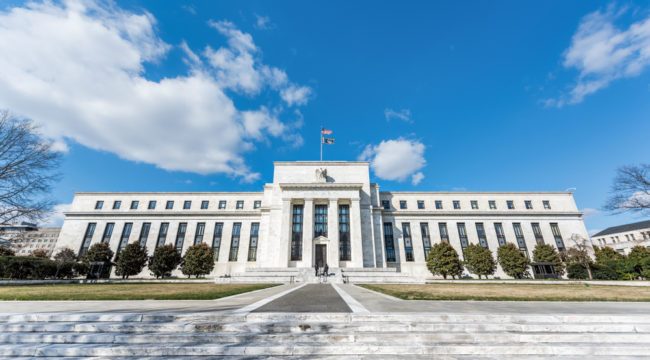 An Urgent Warning for the Fed

The Federal Reserve is unwinding its balance sheet.

At the same time, the Treasury is issuing gorgeous amounts of debt to pay for the Trump tax cuts.

Are the two policies — seemingly disconnected — combining to create a dollar liquidity crisis?

We first set the scene…

And its ultra-low interest rates made dollars available nearly free of charge.

Several emerging-market governments, corporations and banks rose to the bait.

And they created their own mountains of debt with borrowed dollars.

In fact, the world conjured new dollar-denominated debt with even greater gusto than the Fed conjured dollars.

Over $60 trillion of fresh debt sprang into being during this time — much of it overseas.

“This huge debt pyramid was fine,” says Jim Rickards — “as long as global growth was solid and dollars were flowing out of the U.S. and into emerging markets.”

And the outflowing tide that once swept dollars into emerging markets… is now receding.

The dollar is surging.

A rising dollar increases the burden of the dollar-denominated debt emerging markets took on in the heady days of near-zero interest rates.

In turn, fewer dollars are available to service the rising costs of emerging-market debt.

Bloomberg informs us that dollar-denominated debt is now becoming “one of the weakest links in the global financial system.”

It should therefore not surprise that emerging markets have come in for hard sledding.

The MSCI Emerging Markets Index has since fallen over 10% after peaking in January.

Not according to Urjit Patel, governor of India’s Central Bank:

Global spillovers did not manifest themselves until October of last year. But they have been playing out vividly since the Fed started shrinking its balance sheet.

And emerging markets are feeling the blade.

But earlier we raised the issue of the Trump tax cuts.

How in blue blazes do the tax cuts tie in with the Fed’s balance sheet… and a possible emerging-market crisis?

It is time to connect dots…

Taxes have been cut.

But government spending — to state it charitably — has not.

To make good the shortage, the Treasury is issuing vast amounts of debt.

Through 2019, it is on track to sell $1.2 trillion worth of Treasuries to cover the projected deficit.

And every dollar pouring into U.S. Treasury debt… is one dollar unavailable for overseas duty.

Combine the shrinking balance sheet with the dollar-hoarding Treasury issuances… and the result is a global dollar shortage.

The aforesaid Mr. Patel calls the business a “double whammy.”

And he believes the Federal Reserve is sound asleep.

Wake up, he tells Jerome Powell.

And take your wingtips off the monetary brake — or else:

… the Fed has not adjusted to, or even explicitly recognized, the previously unexpected rise in U.S. government debt issuance. It must now do so…

Given the rapid rise in the size of the U.S. deficit, the Fed must respond by slowing plans to shrink its balance sheet. If it does not, Treasuries will absorb such a large share of dollar liquidity that a crisis in the rest of the dollar bond markets is inevitable.

Mr. Patel adds the Fed should “damp significantly, if not fully offset, the shortage of dollar liquidity caused by higher U.S. government borrowing.”

Our agents inform us the Fed has no plans to heed Mr. Patel’s counsel at this time.

But the prospect of a crisis in the dollar bond markets is enough to send Jim Rickards under the bed in terror:

And so the Fed could bumble its way into another crisis — if the foregoing analysis holds together.

“The paths of error are many,” said Aristotle, “the path of right doing is one.”

Do you think it more likely the Fed will select the right path… or one of the many paths of error?