We’ll soon experience profound problems with the U.S. dollar. I expect to see inflation in some areas, deflation in others. On the world stage, we could see anything up to and including a full-fledged currency crisis.

Collapse is a calamitous process that destroys wealth like a tsunami hitting a seacoast.

We’ll see several stages of the collapse play out in any event, because central banks are out of room to steer monetary policy outside of a very narrow channel.

The Fed didn’t raise interest rates in 2010–11, when it should have bitten down on the proverbial bullet. Now, as the world economy teeters on the edge of major breakdown, the Fed can’t cut rates to boost the economy. Even if the Fed’s traditional rate-cutting medicine worked — and it doesn’t always work — that bottle of economic snake oil is nearly empty.

Aside from the Fed, other central banks around the world are in even worse shape. Many of them participated in the failed negative interest rate experiment. We can’t look to them for any help at all.

This will put increased importance on special drawing rights (SDRs), or world money, and gold as possible tools with which to truncate the next collapse. I expect that many nations will use SDRs as a method to protect themselves — certainly the U.S.

But if you’re not a country plugged into the central bank, what’s left for us mere mortals? Your best option is to use gold.

Gold Over the Last Year

In the middle of last December, the Fed hiked interest rates by a quarter-point. One way or another — and there are many viewpoints on this — the Fed move triggered this year’s rally in gold prices and mining shares.

Here’s a chart showing a year’s worth of London gold fix, along with moving averages. After the Fed hike last December, the 200-day average turned upward by February, and has been climbing ever since: 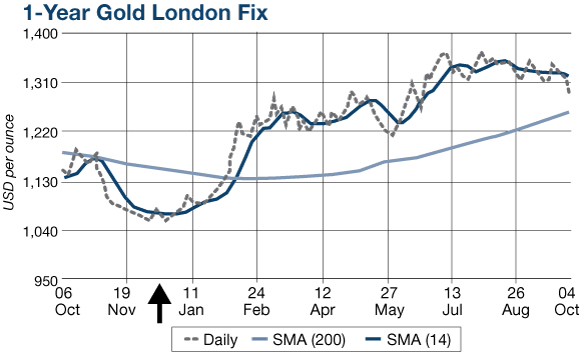 Throughout 2016, gold has benefited from the Fed’s choice to raise rates just a smidge last December. However, that choice tanked the stock market when it occurred. Now we are looking at another very possible stock market repeat. The Fed is doing everything it can to prepare for another December rate hike in 2016. We expect this to trigger market repricing again, or Stage 1 of the Financial Collapse. That’s why it’s important for you to understand how gold prices move during each stage.

If you can gauge which stage of collapse is occurring, then you can predict what will happen with gold. This is especially important during the early stages of acceleration and transmission.

The Stages of Gold

Let’s take a deeper dive into history, using the 1920s and 1930s — the “Roaring Twenties” boom, followed by the Great Depression — as an example. 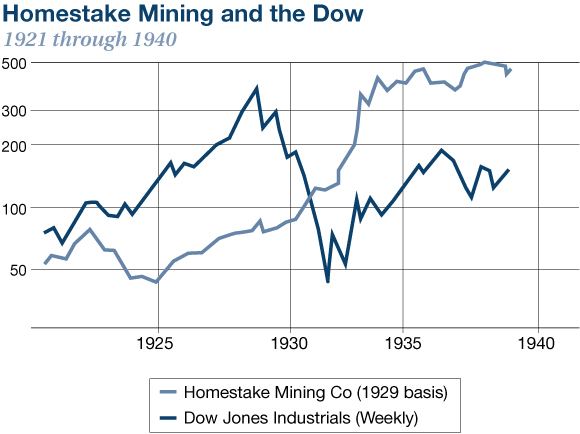 Starting in the mid-1920s, both the Dow and Homestake shares trended up. Then came a sharp spike down in both Homestake and the Dow during the 1929 crash. After that, the Dow continued down, while Homestake/gold began a recovery. Homestake quickly achieved its former high and then, after a period of consolidation, took off upward. Homestake had a powerful run from 1929–1936, doubling three times during that period.

Now let’s apply this example of gold moves during a collapse.

In essence, we’ll have a market sell-off. These days, it might be one or two thousand Dow points. People will sell stocks in an attempt to minimize loses. Some people will likely sell gold and good-quality mining shares because they want to book what gains are on the table and gold is liquid. Expect gold to reprice more or less along with broad markets.

Repricing becomes even worse as the downside opens up into a canyon of loss. People will get hit with margin calls. Leverage will become a dangerous tool that drives many account holders broke. Liquidity will dry up. Gold and shares will likely sell down more but then find a floor. This is because there is inherent value in gold — “gold as money” — which overcomes the desire to sell, sell, sell. So while the market heads down, gold and the best of the mining shares level off.

The rush to the exits jumps from one market to another and then others. Everyone wants their money back, but the realization kicks in that it can’t happen. People will want some semblance of security and in turn begin to deploy funds toward gold gains and strong mining shares.

People hate the markets, they hate stocks, they hate companies and management teams. It’ll be near-impossible to give away shares for many firms. And gold and well-regarded mining shares will begin to resurrect from the ashes.

Sometimes bankers and politicians will “successfully” stop financial distress from escalating. But as Nomi Prins has explained, this just pushes the problem farther into the future and does nothing to fix the root of these problems. This means that, eventually, we are likely to see a full blown collapse.

When that happens, you’ll want to have gold in your possession. It will be one of the first assets to bounce back – look for gold gains.

At some point, the economy will begin to recover. I suspect that it will not be bankers and politicians behind the magic, though. It’ll be natural market forces putting money into ideas where there’s prospect of growth and return, versus casting more good money down a bad hole. History indicates that gold is the first asset to recover. That’s why it’s important for you to hold cash and buy gold when prices drop during the Transmission and Irrationality stages.

Look back at the Great Recession of 2008. The chart below shows the ratio of the S&P 500 market index to the price of gold. The blue line shows you how many ounces of gold it would take to buy the S&P 500 on any given month. This means that when the line moves lower, gold increases purchasing power, because it takes fewer ounces of gold to purchase the S&P 500: 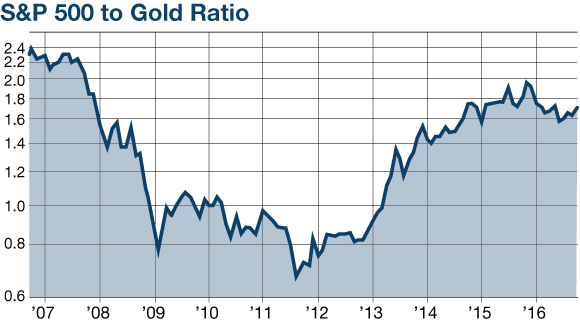 To see how the rest of the market did, we’ll go back to the Dow as a stand-in for the market. Over roughly the same period of time, the Dow Jones Industrial Average (DJIA) regained only 36%. This is why you’ll want to have cash available to purchase gold when everyone else is forced to sell.

In addition to the historical pattern, gold’s fundamentals are solid, while we know that stocks are overinflated right now. This means that when stocks fall, they will likely fall further than they did in 2008. However, I don’t think gold will have to fall far to find its floor.

When the collapse is truncated and recovery begins, gold (and silver) will be one of the first assets to bounce back.