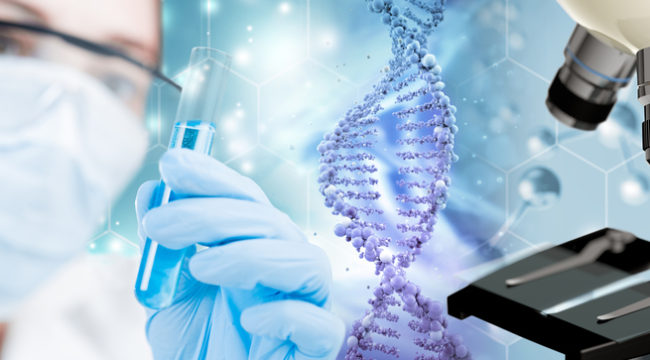 Unleash Superhuman Powers From Your Own Cells

In his presentation he showed how we could be steps away from solving the problem of aging.

West’s research indicates that by reactivating dormant embryonic genes in our bodies damaged cells could restore themselves to perfect health.

Normally, we only adapt to injury and trauma. We scar rather than regenerate.

Meaning finding a way to actually create new body tissues and organs would make many of today’s medical practices obsolete.

Damaged and diseased organs, limbs and tissues could be completely regenerated — including hearts, joints, eyes, the skin, teeth and more.

As I previously mentioned, iTR reactivates the embryonic superpowers locked away in our genomes.

This is a crucial point because during the embryonic phase of development, our bodies can repair injuries completely.

However, humans lose this ability as they develop into the fetal and adult stages of life.

Nevertheless, those fully regenerative powers still exist, folded away in the inactive part of your genome.

The Most Important Chart I’ve Seen This Year

But for the most part he has kept his research a secret since then.

I was hopeful he would divulge more information about his progress at this year’s WSCS. He did, and it was an eye-opening experience.

What brought about West’s iTR breakthrough was the analysis of genetic activity at the point of transition from embryo to fetus.

As explained yesterday, West identified the gene called COX7A1 as the player in the iTR process. He also showed that an existing drug could help this process.

It’s the reason for my optimism. And this chart tells all: 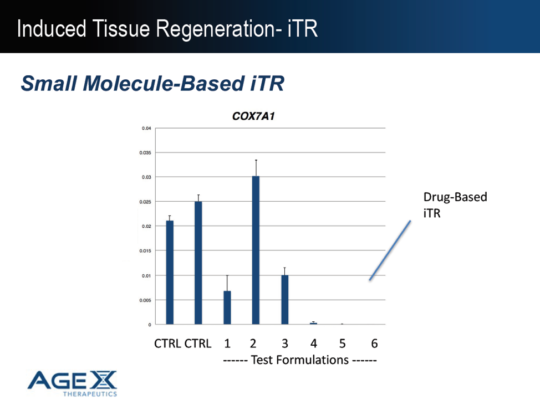 The vertical axis in the chart shows how active the COX7A1 gene is in eight cell samples.

This matters because the COX7A1 gene turns off embryonic rejuvenation.

If we can switch off the COX7A1 gene, we may be able to tap into our dormant embryonic regeneration.

The first two cell populations in the chart are controls, unadulterated COX7A1 genes.

The next six samples have been treated with different combinations of iTR therapies.

As you can see, the second formulation increases COX7A1 activity, meaning no tissue regeneration is possible.

Samples 1 and 3 have somewhat reduced COX7A1 activity. Samples 4 and 5 are extremely low — but look at sample 6.

The cells measured in the farthest column to the right in the chart have no detectable COX7A1 activity.

The cells in sample 6 have their embryonic regenerative potential restored.

In other words, West may have already identified the perfect iTR recipe. Making the idea of doubling our life expectancies a real possibility.

A Few Words on Cost

A lot of people have asked me about the potential cost of iTR.

Many assume that the cost of this therapy will be wildly expensive and available only to the ultra-rich.

But in truth it makes no sense to price iTR beyond the reach of the general population forever.

The iTR cocktail shouldn’t be expensive, as typically small-molecule drugs like West’s therapy are cheap to make.

And I suspect the cost of the clinics’ facilities and labor will be greater than that of the iTR cocktail.

Moreover, insurance companies and programs such as Medicare don’t look only at the cost of a therapy. They include the savings that come from prevention of expensive health conditions in their calculations.

Initially, I suspect that iTR will be rolled out for specific tissue therapies. Heart disease, blindness and cosmetic skin and hair rejuvenation therapies.

Eventually, however, regulators will approve a path for anti-aging therapies. We’re already seeing these pathways opening up in some Asian countries.

My prediction, based on historical pricing data, is that the cost of full-body iTR will be less than the cost of treatment for a heart attack.

Prior to this year’s WSCS, I thought the chances of me living long enough to get that therapy were pretty low.

I’m much more optimistic now. You should be too.

Editor’s note: As you can see, we’re steps away from potentially eradicating aging and even death…

This could be the most important video you see all year. Click here now to watch.