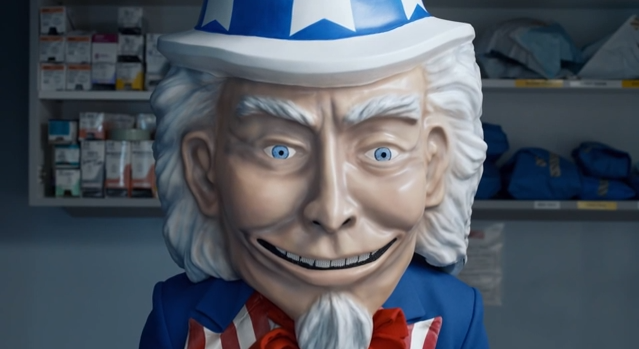 Well… We can say in all honesty we never anticipated linking to a video of a gynecological exam. Much less one that features a creepy Uncle Sam wielding a speculum.

There’s no shortage of Obamacare headlines this morning. But most of them are far more predictable, and far less entertaining, than the one-minute spot prepared by the “Opt Out” campaign…

Besides, there’s nothing you can actually do in reaction to these stories. You’re a helpless spectator. Which is why we find the YouTube video much more intriguing…

The message for everyone: You’re better off paying the fine than getting on the exchange merry-go-round.

“What we’re trying to communicate is, ‘No, you’re actually not required to buy health insurance,'” says Evan Feinberg. “You might have to pay a fine, but that’s going to be cheaper for you and better for you.”

Mr. Feinberg is president of a group called Generation Opportunity, described by Yahoo News as “part of a coalition of right-leaning organizations with financial ties to billionaire businessmen and political activists Charles and David Koch.”

Generation Opportunity produced the video; there’s also a version geared toward men, in which the patient is curled up on the table and old Sam snaps on a pair of latex gloves.

The message for everyone: You’re better off paying the fine than getting on the exchange merry-go-round.

“The health exchanges rely heavily on young, healthy Americans who will subsidize the sick and elderly within the pools,” explains Yahoo. “Without the healthy, the exchanges could be unsustainable. The Obama administration is devoting millions of public dollars to promote the exchanges, but many conservative groups are actively working to convince people not to join.”

Nor is the campaign limited to the videos.

“Generation Opportunity intends to host events at college football tailgate parties festivals,” says Yahoo, “where ‘brand ambassadors’ (read: hot young people) will pass out beer koozies that read ‘opt out,’ pizza and literature about the health care law. Some events may have impromptu dance parties with DJ’s, complete with games of cornhole and competitions for prizes, organizers said.”

They’re even commissioning actors on Craigslist to dress up like Creepy Uncle Sam at $275 a pop.

Hmmm… Maybe this campaign will have more legs than the “burn your Obamacare card” message that fell flat because, well, there’s no such thing as an Obamacare card.

Young people aren’t the only ones opting out. “I would love to have insurance, but we just don’t have the money,” says Sandra Czop.

Ms. Czop is 58. She’s a mortgage loan officer in the Chicago suburb of Bloomingdale. Her business is down 60%. Her husband is unemployed. For now, the penalty — or, if you prefer the Supreme Court’s nomenclature, tax — is easier to swing than insurance. “We need that $100 to put food on the table,” she tells CNN Money. “We have no money to put gas in the car.”

“For some folks,” the CNN Money story sums up, “health insurance just isn’t a good deal.”

News Flash: Obamacare is a disaster. Of course, you already knew that. But there are a few things you might not know about this social program that would make you sick to your stomach. Click here to see the full report.

Originally Posted in The 5 Min. Forecast