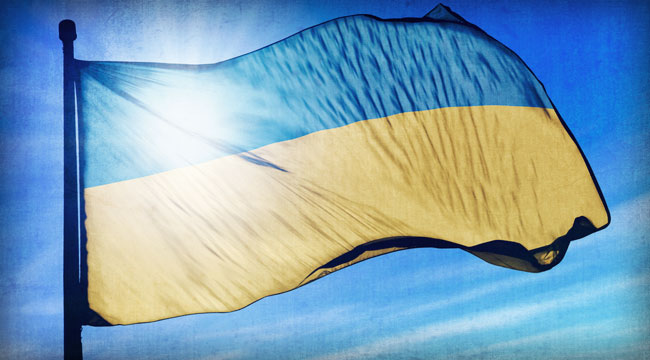 In the year 410, barbarians started to overrun Great Britain — then a far-flung province of the Roman Empire. British leaders sent a request for aid to the emperor Honorius.

“We do not know exactly what the letter to Honorius contained,” writes Martin Skold from the Center for International Maritime Security, “but Honorius’ response, now referred to by historians as the Reply of Honorius, essentially told the Britons — theoretically Roman citizens who could count on the protection of the Empire — that they would have to make do on their own; Rome had troubles of its own and could not send help this time.”

Months later, Rome itself was sacked… and after another couple of generations, the Western empire was history.

Secretary of State John Kerry is in the Ukrainian capital Kiev today, offering $1 billion in loan guarantees to the new anti-Russian government.

Kerry is relieving himself on a bonfire; Ukraine’s government says it needs $35 billion to tide itself over for the next two years.

President Obama, meanwhile, is threatening sanctions against Russia for taking de facto control of the Crimean peninsula — which was Russian territory until the Soviet leader Nikita Khrushchev decided to hand it to Ukraine one day in 1954. (By some accounts, Khrushchev was hammered at the time.)

Russia’s response? Maybe we can figure out a way to avoid using the dollar for international transactions.

Or as Kremlin economic aide Sergei Glazyev put it, “We would find a way not just to reduce our dependency on the United States to zero but to emerge from those sanctions with great benefits for ourselves.

OK, that’s clearly overblown. But Russia already bypasses the dollar with its No. 2 trading partner China. And Russia has leverage with some of the countries within its No. 1 trading partner, the European Union.

Consider this: Over the weekend, Obama thought one of the ways he might “punish” Russia was by kicking Russia out of the G-8 club of industrial democracies.

“Nein,” said German Chancellor Angela Merkel. Now, why would she say that? Maybe it has something to do with this chart and the big orange wedge on the right? 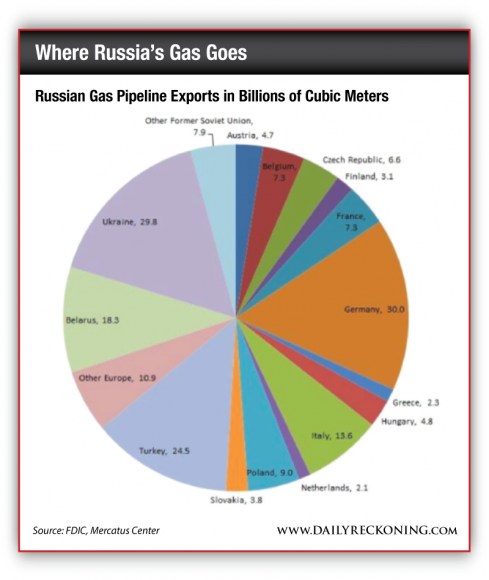 The media generally ignore the energy angle in the Ukraine story, but we do not. All told, Germany gets 36% of its gas from Russia. And it’s going to need even more if Merkel is serious about shutting down all of her country’s nuclear power plants.

How different the world looked only last week to the blinkered Beltway crowd.

A week ago yesterday, Foreign Affairs editor Gideon Rose was on The Colbert Report all but running a victory lap for the Ukrainian regime change effectively engineered from Washington while the Olympics were still underway in Russia…

Rose: We want to, basically, distract Russia. Oh, look, you have the highest medal count, oh, you did really well…

Colbert: Here’s a shiny object, we’ll just take an entire country away from you!

“There are a lot of bad comparisons made between America’s worldwide defense posture and the Roman Empire,” writes the aforementioned Mr. Skold, bringing us back full circle.

“The two do, however, have one obvious thing in common: In both cases, a powerful state made promises to defend far-flung territories. As with Rome, the U.S. is finding out how expensive such promises can be to keep…

“The U.S. is in danger of issuing its own Reply of Honorius — those whom we have promised protection may have to rely on their own resources.”

Of which Ukraine has precious few…

Ed. Note: To stay informed on the world’s most important news and investment stories, sign up for the FREE Daily Reckoning email edition, right here.