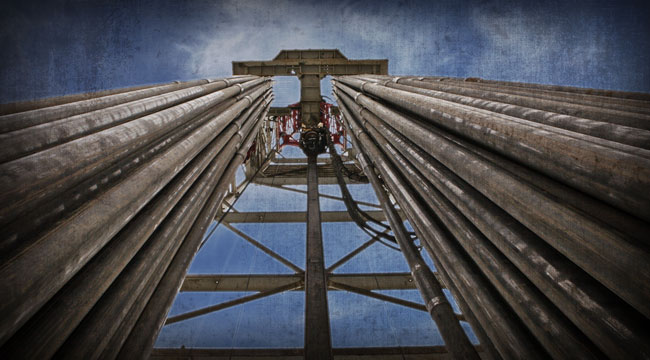 I’m sure you’ve seen the news. Radical Islamist armies are marching towards Baghdad, slicing through Iraqi government troops like a hot knife through butter.

Iraq is breaking apart. As if recent, U.S. policy fiascos in Libya, Egypt and Syria were not enough, the wheels are now coming off the proverbial bus in Iraq, site of so much blood and treasure spent in the last decade. Loss, loss and more loss.

Tragedy unfolds before us. U.S. policies across the Middle East are coming undone. In Washington, U.S. officials are panicking, and — characteristically — there’s talk of U.S. airstrikes against Islamists.

With that in mind, the Middle East “Oil Wars” scenario I’ve been outlining since 2007, is clearly playing out, very much along the Shiite-Sunni fault lines that I described here in The Daily Reckoning for the past several years.

At the same time, closer to home, the Age of Wealth scenario my partner Matt Insley and I have predicted is unfolding as well. U.S. oil prices are at their highest levels in well over a year. We live in a global oil market, and far distant events can drive prices upwards in the U.S. and Canada. For example, look at the chart for U.S. West Texas Intermediate (WTI) blend. 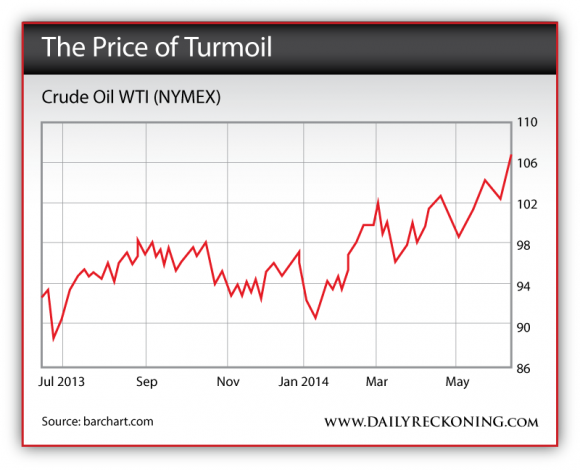 Looking at the chart, not even the bitter cold and snow of this past North American winter moved oil prices up to where they are now. But the Middle East heating into turmoil? Well, that’s a camel from a different stable.

Meanwhile, share prices for energy-consuming industries — airlines and more — are down, on the prospect of higher fuel prices. On the other hand, domestic oils and oil service plays are up. Again, it all fits our energy investing thesis, which is to keep your net worth away from “too much” Middle East exposure.

Sooner or later, it’s all going down over there. As I watch what’s happening over there, I’m inclined to think it’ll happen sooner rather than later. But there’s good news.

The U.S. has entered its New Age of Wealth — which gives you an opportunity to invest and profit despite Middle Eastern mayhem.

Fracking — the key to the U.S. energy renaissance — is the culmination of decades’ worth of technology improvements in the energy biz. That is, just pressuring rock with fluids — classical “fracking” — has been around for nearly 70 years. But horizontal drilling now makes it possible to expose many thousands of feet of hydrocarbon-bearing rock to the magic of super-high pressure.

In other words, in the “olden days” of vertical drilling, the drill bit might penetrate 30, 50 or even 100 feet of “pay” rock. That was good back then, but can’t cut it today.

Nope. Today, with geo-steering drill-bits, and very precise placement of the well bore within a formation, an operator can gain access to literally miles of exposed rock face, deep down. Then come the “stages” of fracking, which release the oil and gas. Yes, it’s complex technology, and not all that many companies can make it work.

We’ve covered it all — and even highlighted the companies that deliver this cutting-edge tech — like Halliburton, Schlumberger and Baker Hughes to name just a few. The U.S. has come a long way.

Remember back in 2005 or so? U.S. conventional oil output was heading down fast, in seemingly irreversible decline. Then the directional drilling and fracking revolution happened, in the sense that it began to kick into higher gear. By 2007, the oil industry was adopting the new tech at a fairly good clip. Since about 2008 — in the wake of the financial crash, as a matter of fact — U.S. oil output has soared. 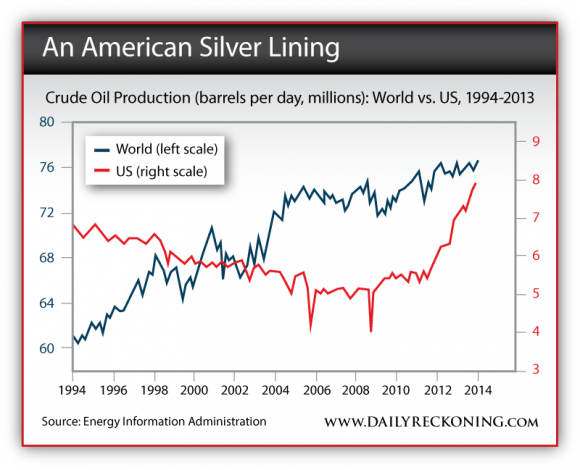 Indeed, since about 2008, U.S. oil output is up by over three million barrels per day, while output in the rest of the world has been flat or declining. So U.S. fracking has added significant daily oil output to world markets, equivalent to a fair-sized nation in, say, the Middle East.

Also consider that, in most other oil producing nations, internal demand is increasing; which means that amounts available for export are falling. So more and more U.S. oil is making up for less and less overall oil available on world markets.

Thus, in a world with less oil available for international trade, the U.S. is growing its output. And that’s why I say, “thank God for fracking,” which really means “thank God for new tech.” Without fracking — and the tech behind it — we’d be in a world of hurt.

Let’s return to the Middle East, which may still cause us a world of hurt because the place is collapsing before our eyes.

How bad will things become? Not long ago, for example at the Platts Conference in London, several speakers made favorable references to how Iraq would soon ramp up oil production and exports. This will serve to meet growing global oil demand, and moderate prices in years to come. Right?

Iraq is breaking apart. As if recent, U.S. policy fiascos in Libya, Egypt and Syria were not enough…

Well, this week I saw imagery of Islamists chopping off the heads of captured Iraqi government soldiers. Thus, I began to discount that optimistic prediction by the speakers at Platts.

Looking elsewhere, I’ve heard predictions that Libya will eventually get back to being a major world oil exporter. Then, at the Offshore Technology Conference in Houston last month, former Shell Oil CEO John Hoffmeister pointed out that Libyan rebels have managed to seize and hold Libya’s oil exporting terminals.

“Libyan forces possibly could retake those oil terminals,” noted Hoffmeister, “but to my understanding of chemistry, hydrocarbons don’t work well with exploding rocket grenades and tracer bullets.” In other words, if the Libyan troops attempt to retake the oil sites, Libya risks blowing up critical infrastructure, such that it will take years to rebuild, if that happens at all.

Here’s the bottom line. We live in a world that runs on oil. Much of that oil supply is at risk, due to the above-noted “Oil Wars” scenario. Here in the Daily Reckoning, I’ve discussed the situation for many years. I’ve focused investment ideas on investing “around” the looming storm, as much as that’s possible.

Still, here in the U.S. — and Canada, to be sure — our energy industries have developed technology to pull hydrocarbons out of seemingly impermeable rocks. It’s the right tech at the right time in history. Just in time, as things are turning out. We are blessed, if you care to look at it that way.

Perhaps some wonderful politician, somewhere, will stand before a teleprompter and give a fine speech. Perhaps that fine speech will move souls, to the point where peace and love breaks out, and the world enters a new era of harmony. That, and oil prices will fall. Perhaps; but don’t bet the ranch on it.

Instead, keep your eyes peeled for the furies of war. Unless you’re very elderly, you have NEVER seen the kind of carnage that’s about to sweep across entire swaths of the world. To use a different form of godly analogy, Mars wants to be paid — in gold, blood and oil. Invest accordingly… and keep your your eyes peeled on these pages — because we saw it all coming, years ago.

Ed. Note: This essay was first featured in today’s Daily Reckoning email edition – along with a full analysis on the price of crude oil and gasoline. Not sure if $4 gas is in the cards? We explained what to expect over the coming months and how to prepare yourself as an investor and a driver. It’s just one of the many free daily perks of being a subscriber to the DR. Sign up for FREE right here, and get a host of great benefits, including regular opportunities at real, actionable investment tips.