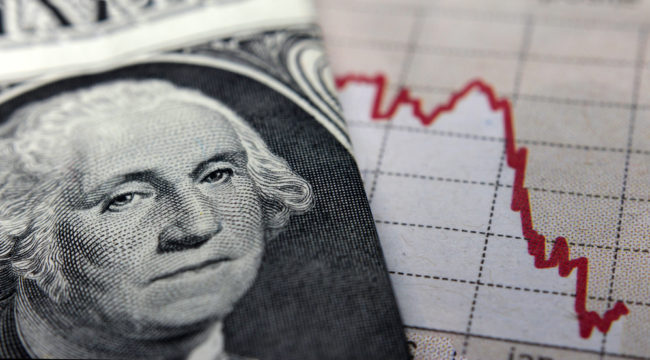 Are elites telegraphing the next recession?

Not one… but two card-carrying members of the monetary elite have recently raised the harrowing “r” word.

The odds of a U.S. recession over the next year is a mere 15%, according to a Bloomberg survey of 40 economists.

But as former Treasury secretary and current Harvard grandee Larry Summers wrote in the Financial Times this week:

Experience teaches that recessions are almost never forecast or even rapidly recognised by the Fed or the professional consensus forecast.

A muted warning of recession?

And how does the Fed respond to recession, Mr. Summers?

Historically, the Fed has responded to recession by cutting rates substantially, with the benchmark funds rate falling by 400 basis points or more in the context of downturns over the past two generations.

The benchmark funds rate to which Summers refers currently rests between 1 and 1.25%.

Assume for the moment a recession at current rates.

If the Fed hews to script and cuts rates 400 basis points — or 4% — the ultimate result will be a substantially negative interest rate as low as -3%.

Enter now the second character in our drama…

A Harvard economist like Summers — and a chess grandmaster, no less — Kenneth Rogoff plays the role of mad monetary scientist.

For years Rogoff has warbled the virtues of negative interest rates and the cashless society.

The first can’t truly be realized without the second.

And Rogoff has just scribbled a new paper arguing that central banks should prepare now for the next recession by pursuing plans to cut rates below zero.

Amplifying Summers slightly, Rogoff notes the Fed slashed rates an average 5.5% during the nine recessions since the 1950s.

That is of course impossible given today’s 1–1.25% rates — unless the Fed ventures deep into the dingles of negative rates — precisely his vision.

Behold if you will, a slight glimpse of Rogoff’s deep-water greatness:

It makes sense not to wait until the next financial crisis to develop plans and, in any event, it is time for economists to stop pretending that implementing effective negative rates is as difficult today as it seemed in Keynes’ time.

John Maynard Keynes’ time was of course during the Great Depression — long before the advent of digital money.

And Rogoff argues the cashless vision is now within grasp because cash is mainly limited to small transactions:

The growth of electronic payment systems and the increasing marginalization of cash in legal transactions creates a much smoother path to negative rate policy today than even two decades ago.

And disturbing — if you prefer cash and the defense it provides you against the possibility of negative interest rates.

But our own Charles Hugh Smith asks, “Are We Already in Recession?”

Answering his own question, Charles says, “If we stop counting zombies, we’re already in recession.”

Recessions are supposed to, in his words, “clear the financial deadwood — failed enterprises are liquidated, borrowers who are in default are bankrupted and bad debt is wiped off the books via the acceptance of losses.”

But that clearing of deadwood was never allowed to proceed.

Because of the Fed’s zero interest rates, it just kept piling higher… providing highly combustible kindling for the next great fire.

Here, a graphic of possible recession: 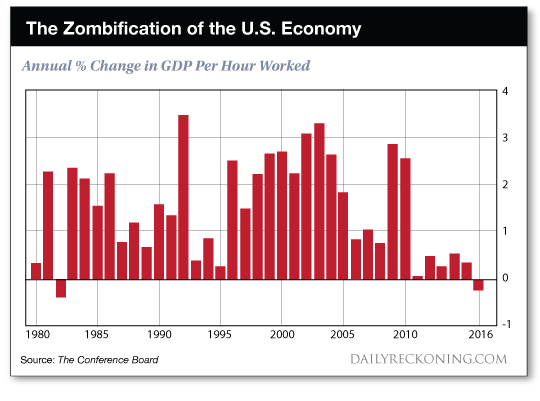 Those who study recessions know that employment often tops out just before the economy rolls over into recession. Strong employment is the last gasp of an expansionary phase.

Incidentally, recessions are only identified in hindsight. They never become official until final GDP numbers are announced maybe six months later or more.

So Charles could be proven correct… six or more months from now.

Meantime, the Fed is planning another rate this year. It will also likely start unwinding its $4.5 trillion balance sheet in September.

So if the economy isn’t in recession already… could the Fed stumble its way into the very recession it’s desperate to avoid?