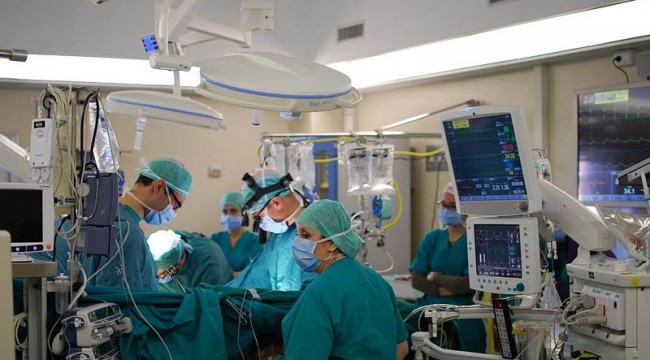 Two Little Headlines and the End of Health Care

CNBC spit out the following two headlines moments after the close yesterday. They appeared as alerts on your editor’s iPad like so…

The juxtaposition was not intentional. But it might as well have been.

Which makes today as good a time as any to thrash out a few things that have been on your editor’s mind. These thoughts don’t yet form a coherent whole. But boiled down to the essence, it’s this…

Sometime in the next 20 years, you’ll no longer be able to get treatment for chronic disease in the manner in which Americans have become accustomed.

We’re talking conditions like heart disease, stroke, cancer, diabetes, obesity and arthritis. The money just won’t be there. Not if costs continue to rise at their current clip.

And Obamacare is only a small part of the story. This is a situation that’s been building for decades.

Before we go any further, ponder this: Under normal conditions of capitalist advancement, you get progressively better results for progressively lower cost. 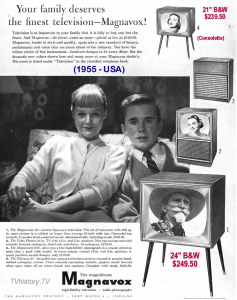 1955 Magnavox TV ad as annotated by the tvhistory.tv site.

Today, you can get a 48-inch flat-screen color TV — twice the diagonal size, but even better because you get a movie-style aspect ratio — for $379.

But the modern American health care system does not operate under normal conditions of capitalist advancement. It is a government-protected cartel operated for the benefit of insiders.

So say the actuaries at the Centers for Medicare and Medicaid Services in a report released yesterday. To be precise, health care spending will account for 19.6% of GDP by 2024. In 2013, it was 17.4%.

The percentage had leveled off in the aftermath of the “Great Recession.” Now it’s poised to jump again. And long before today, it was completely out of whack with the rest of the developed world. 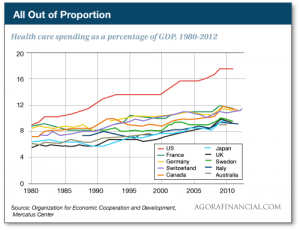 Yeah, we know. These are government projections, so they’re suspect. And as we’ve discussed on many an occasion, GDP is a pointless statistical abstraction.

So let’s leave GDP out of it. Look instead at the per capita cost of health care… 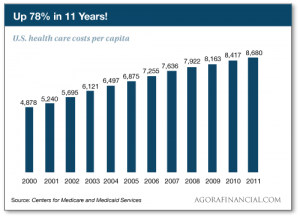 Back to the actuaries’ projected increase: They attribute it to the growing number of people with health insurance under Obamacare, stronger economic growth and the legions of aging boomers going onto Medicare.

Another major factor: Spending on prescription drugs, which grew 12.6% last year alone, “partly as a result of expensive new treatments for hepatitis C,” says the report.

Which brings us to the quarterly numbers for Gilead Sciences (GILD) — the maker of that expensive new treatment for hepatitis C.

As you could glean from the headline earlier, the numbers were phenomenal. As we write this morning, GILD is up more than 4%. It’s nearly doubled in the last two years.

That’s in the United States. In Egypt, Gilead charges $900 for course of treatment.

On the other hand, “Hepatitis C patients in the U.S. are mostly uninsured, underinsured and/or incarcerated. Medicaid, the VA and our prison system bear the brunt of the cost impact, and by extension, so do all of us as taxpayers.”

It’s not just drugs. It’s everything in health care that operates in this extortionate manner.

In 2011, New York Daily News reporter Beverly Weintraub had a scare — her teenage son choked on a piece of turkey. He spent four hours in the emergency room — at a cost of $22,214.92.

Well, that’s what the hospital billed Aetna. Aetna paid only $2,885.67 — an amount to which the hospital agreed. Weintraub’s out-of-pocket was about $800.

“The rates that insurance companies pay,” Weintraub wrote after much investigation, “are negotiated based on what they believe a hospital’s true costs are. But then those rates are jacked up an average of 30-50% to make up for money that hospitals lose in treating patients who don’t have private insurance — which is the majority of them. So to make up the difference, they overcharge patients who are insured. This practice is called cost-shifting.”

“What’s missing from this complex web,” Weintraub adds, “is any hint of what the services a patient received actually cost.”

“You walk into a grocery store. You get to the checkout counter and present your basket of groceries. The checkstand operator asks you to swipe your card first, before ringing them up, and the store’s computer checks both your available credit line and bank balance.

“It then decides what the basket of groceries on the belt is ‘worth’ to you and what you can afford, setting a multiplier that results, if you happen to have a lot of money (or credit), in a price that is 10 times as much as the person behind you pays.

“Oh, and to keep you from figuring it out, the checkstand doesn’t display any prices either; you find out how much your card was hit for your groceries only after you leave the store.”

And then there’s the cost to the taxpayer: The actuaries’ report says by 2024, nearly half of all health care spending will be covered by federal, state or local government. That’s up from 43% last year.

In 2011, the Congressional Budget Office projected federal health care spending would double by 2022.

“But for better perspective,” our executive publisher Addison Wiggin wrote in 2011, “examine how much health care spending comprises the entire federal budget. 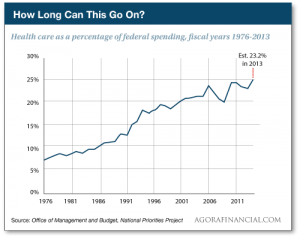 With this number too there was a “Great Recession” hangover… but if the Medicare and Medicaid actuaries are right, the trajectory is sure to take off again.

By some estimates, health care is already approaching 27% of all federal spending. 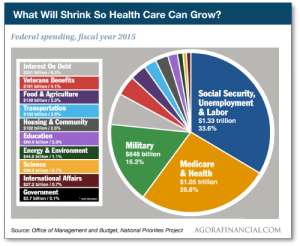 “If you haven’t already figured it out,” said Addison, “that’s a trick question. Something in the system is going to break long before health care spending eats up half the federal budget.”

Which brings us back where we started: 20 years hence, you won’t be able to count on the health care system to treat chronic disease as aggressively as it does now.

What the new system looks like, we don’t quite know. Our friend Jud Anglin from the Laissez Faire Club is convinced Obamacare is the prelude to a single-payer system like Canada’s.

Looking at all the numbers above, that might be — God help us — the least-worst outcome.

Medical miracles might not be there to save you otherwise.

Oh, and you might want to buy some GILD shares too.

They’re still a favorite of our Rick Pearson, contributor to Mayer’s 100x Club and editor of our Catalyst Trader service.

It won’t be able to charge Americans $1,000 per pill forever… but the madness of the current health care system still has legs for now. You might as well profit from it.