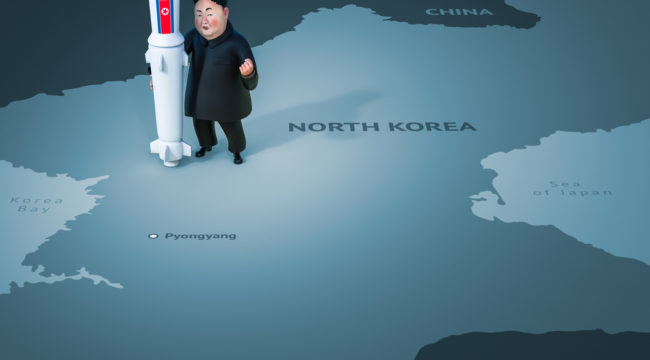 The Truth About Nuclear Proliferation and North Korea

I’ve been arguing for months that we are headed for war with North Korea because of its nuclear program.

This brings us to the topic of nuclear proliferation.

Nuclear proliferation of the kind we are seeing in North Korea is nothing new. The U.S., Soviet Union (now Russia), U.K. and France all had nuclear weapons by 1960. China joined the club in the mid-1960s.

India and Pakistan started becoming nuclear powers in the 1970s. Israel has never officially announced it has nuclear weapons, but it is well-known that Israel possesses them. At various times, South Africa, Brazil, Iran, Syria, Iraq and Libya have pursued nuclear weapons development.

The Iranian program is the only one of those that is still active.

Critics of any effort to attack North Korea to stop its nuclear weapons program point to this extensive proliferation over 60 years as a reason not to risk war. According to these critics, the world has learned to live with eight nuclear powers. One more won’t matter. Deterrence works.

North Korea knows that if it uses nuclear weapons, it will be subject to a nuclear attack by the U.S., and therefore it won’t use them.

But this analysis is wrong on a number of levels.

The U.S. began its nuclear program to end World War II. The U.K., French, Russian and Chinese nuclear programs were part of a Great Power dynamic in the Cold War that does not apply to lesser powers like North Korea.

For the Great Powers, deterrence does work.

Israel’s program is a response to an existential threat from the Arabs (four large wars and many smaller ones in less than 70 years) and Israel’s lack of strategic depth. India and Pakistan are mutually hostile and their weapons are aimed at each other, not at the west.

North Korea is different because it continually threatens to use nuclear weapons on the U.S. and its allies, like Japan.

Deterrence does not work on Kim Jong Un. The North Korean leader will be safe in his nuclear bombproof bunker. He does not care about his people.

All communications, cellphones, computers, bank ATMs, debit and credit cards, gas station pumps and lights would be disabled. U.S. civilization would last about three days before food and water were depleted and society descended into rival gangs of looters and vigilantes.

That may sound paranoid or alarmist, but it’s not. It’s a legitimate possibility.

This is why North Korea will not be allowed to have nuclear weapons. This is why war is coming.