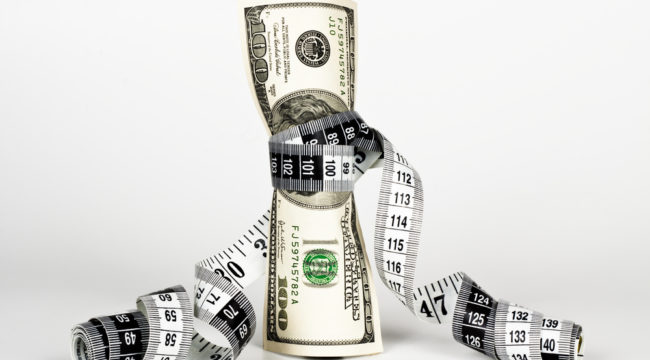 The Truth About Trump's "Skinny Budget"

I’ve been betting on the Great Disrupter, I find myself validated once again by the so-called “skinny budget” issued by the White House on Thursday.

After all, if you wanted to dump a truckload of sand into Washington’s fiscal gears, a plan to shift $54 billion from the shallow end of the Swamp (State, EPA, HUD etc.) to the deepest end (Pentagon) would be just the ticket.

And in the process you could throw your budget director overboard on day #1, which would be another plausible goal if disruption is your modus operandi.  Otherwise, a credible fiscal spokesman might come in extremely handy in an environment where a bruising $20 trillion debt ceiling battle is just around the corner and where your multi-trillion “stimulus” plans are crushing up against inherited deficits of $10 trillionover the next decade.

Indeed, when you have already run-up Uncle Sam’s net debt by $260 billionduring your first 50 daysin office and will be out of cash before Memorial Day, you might want to have one of the GOP’s most experienced and competent budget hawks at your side and fit as a fiddle.

But not the Donald.

He just sent his Office of Management and Budget (OMB) Director, Mick Mulvaney, right into a nest of budgetary machine gun fire on Capitol Hill. I held that same position under Ronald Reagan, so I have some sympathy for the man.

Mulvaney will be eviscerated politically within weeks, and for no ascertainable purpose. The Trump skinny budget is already DOA, and couldn’t get 30 votes in the House on a secret ballot.

I should make clear I’m 100% in favor of every one of these cuts, and a lot more, too. For instance, I wouldn’t cut the Commerce Department by merely 16% or $1.5 billion; I’d ashcan the whole joint. Free enterprise doesn’t need thousands of bureaucrats to help it do “commerce.”

Likewise, the whole Agriculture Department is a relic of the New Deal. Farmers on $250,000 combines harvesting 16 rows of corn at a time by GPS navigation don’t need $23 billion per year from the taxpayers or even the $18 billioncontained in Trump’s skinny budget.

But since even the $54 billionof nondefense cuts Trump has identified involve deep surgery without anesthesia on numerous bloated appendages of Big Government, the idea that such savings should be wasted on the Pentagon is downright appalling.

Imperial Washington already spends $600 billionon defense, which happens to be10Xwhat the Russkies spend, and even then it wastes upwards of$125 billionper year according to the most recent independent audit. So Trump is not draining the Swamp; he’s just proposing to dredge the deep end and re-channel its fetid waters to the far side of the Potomac.

Even that is not going to happen, however.

What Trump’s skinny budget will actually accomplish is to embroil the already fragile GOP majorities in a rip-roaring internal fight over busting the DOD sequester caps in order to transfer wholly unachievable cuts from the domestic agencies.

Needless to say, this one-sided battle over “priorities” will squander huge amounts of political capital and add one more roadblock — on top of the “Obamacare repeal and replace” battle and the impending debt ceiling crisis — to the rapidly fading prospects for the Trump Stimulus that has gotten Wall Street so jiggy.

Indeed, the skinny budget is such a complete legislative stink bomb that it should clarify once and for all that the Trump White House has no semblance of a viable fiscal strategy. It is floundering wildly and digging itself deeper into budgetary quicksand with each passing day.

When all the bloodletting is done in this case, in fact, the military-industrial complex and congressional porkers will fund every dime of the $54 billion defense bonanza. But when the GOP appropriators in the House and Senate finish their laughing and spleen-busting denunciations of Trump’s skinny budget — the $6 billion of cuts from the National Institutes of Health, for instance — they will end up charging 95% of the utterly unnecessary defense increase to Uncle Sam’s already maxed-out credit card.

But making fiscal ends meet is not remotely on the Donald’s mind. As he said in Nashville last week, what he really has in mind is not so much whacking the EPA budget by 31% as it is blowing a cavernous hole in Uncle Sam’s revenue base:

We’re going to reduce your taxes, big league! I want to start that process so quickly!” Trump exclaimed to an ecstatic crowd in Nashville on Wednesday night. “Got to get the health care done, we gotta start the tax reductions…. I want to cut the hell out of taxes…”

Now let’s also be clear, there is nothing wrong with cutting Federal taxes by upwards of $5 trillion over the next 10 years, as would occur under the full measure of the Trump corporate and individual tax reductions.

After all, according to the Congressional Budget Office’s January estimates Federal receipts under existing law would total $43 trillion during the period, meaning that the Donald has a quite reasonable 12% weight reduction program in mind for Uncle Sam.

But if you don’t want to end up like the Donald’s Atlantic City casinos, you have to pay for these tax cuts with spending reductions. And, yes, that’s true even if you allow for “dynamic scoring” or the so called growth dividend and revenue reflows from lower tax burdens on labor and enterprise.

But no one except a fiscal charlatan can argue that tax cuts pay for 100%of the revenue loss. You might get25% back in higher growth, but you have to earn the rest either from new less damaging revenue sources such as the BAT (border adjustment tax); or preferably through sweeping spending cuts in the budgetary precincts where the real money lies.

In other words, what passes for Trump’s fiscal program is a steaming pile of inconsistency, impossibility and retarded math. I’m quite sure that Trump’s pursuit of his “phenomenal” tax cuts along with these radical shifts in spending priorities and the huge infrastructure program to boot will result in one thing: Namely, a complete Fiscal Bloodbath and breakdown of governance that’s not even remotely “priced-in” in a stock market trading at 25X S&P 500 earnings.

To be sure, at the end of the day a complete descent into fiscal carnage is exactly what needs to happen.

Only after the financial markets first implode in fearful capitulation can the decks be cleared and a pathway to avoid eventual national bankruptcy be fashioned.

So by fecklessly indulging his posse of generals and the military industrial complex while sending his budget director on a kamikaze mission on the domestic side of the budget, the Donald is accomplishing his job as the Great Disrupter — even if that’s not exactly his stated purpose.

Trump’s skinny budget is more DOA than anything I sent to Capitol Hill back in 1981. At least back then the Gipper had a clean national balance sheet to squander and plenty of fiscal headroom to accommodate his sweeping tax cuts.

Stated differently, the Donald was essentially sunk before he started, but has now added insult to injury by assembling an economic team that is clueless about the nation’s dire fiscal condition and the legislative process which surrounds it.

The only thing more ridiculous than Trump’s skinny budget, therefore, is the Wall Street delusion that a giant tax cut and infrastructure spending program is about to give the U.S. economy a huge shot of get-up-and-go.

To the contrary, what the Wall Street punters are about to get is the shocking discovery that the Trump Reflation Trade was a complete scam all along.