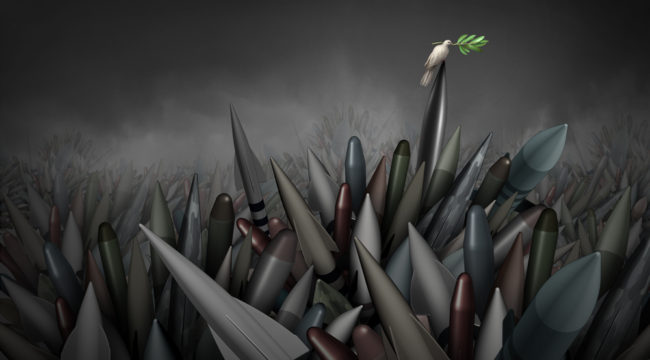 Trump’s Revival of the Nuclear Triad

Back in April, President Trump unleashed a Massive Ordnance Air Blast weapon, or MOAB, commonly called “mother of all bombs,” on a maze of tunnels and bunkers occupied by ISIS in eastern Afghanistan’s Nangarhar Province. It is believed that 94 Islamic militants were killed.

That attack came a week after President Trump authorized a missile strike on Syria in response to a poison gas attack allegedly carried out by the Syrian government. The use of the MOAB was only two days after North Korean officials threatened a nuclear strike on the U.S. mainland should hostilities break out.

It has been some time since the U.S. gave much thought to civil defense and rogue nuclear powers threatening the international order. But continued nuclear proliferation is changing that strategic environment.

Tuesday’s long-range missile test proves that North Korea is increasingly pushing out its missile development programs and is directly threatening nuclear action against the U.S.

There’s also the Iranian missile and nuclear energy programs that were given tacit approval by the Obama administration that have the Middle East on edge.

So it appears that the U.S. must once again consider the unthinkable. The U.S. must begin to develop a nuclear strategy beyond the traditional deterrence that has held these horrific weapons at bay for over 70 years.

But the first challenge is that the triad of U.S. nuclear weapons have suffered benign neglect since the collapse of the Soviet Union in the late 1980s and are in major need of upgrading.

Since 1945, the U.S. has spent over $5.5 trillion to establish a deterrence using nuclear weapons. These weapons can be delivered by means of three strategic systems, referred to as the nuclear triad.

The first is the strategic bomber fleet that operates from bases around the world. Key sites for these aircraft are places like Alaska. When I was a young infantry officer, one of our missions was to defend those air bases because of their importance to the strategic triad.

A B-52 strategic bomber.

There are also air bases in Diego Garcia, in the middle of the Indian Ocean, and on the island of Guam, in the Pacific. These bases are situated so that America’s Strategic Air Command can reach anywhere at any time.

The second leg of the triad is the ground-based intercontinental ballistic missile (ICBM). They are in silos that are in the ground across the U.S., specifically in the Midwestern and northern states.

The ICBMs have multiple warheads and are devastatingly effective systems. At any given moment, they take about 30 minutes from the time the president authorizes the launch to the time of impact.

The third leg of the triad is submarine-launched ballistic missiles. This is probably the most important of the triad because it’s the one that’s the least predictable in time and space, so it’s the most difficult for an antagonist to attack in a pre-emptive first strike.

The very essence of deterrence is that the country that is attacked will still have sufficient forces available to inflict a devastating retaliation. The fact that the location of our nuclear subs was compromised during the Cold War by the Walker family espionage ring is what made their crime among the most grave security breaches in U.S. history. It literally made a pre-emptive nuclear strike by the Soviets much more likely to succeed.

America’s nuclear triad has suffered since the end of the Cold War, in the early 1990s. It has been a period of neglect, and right now the triad needs an enormous amount of funds, time and engineering talent to bring it back up to the state that it needs to operate.

Between 2010–2018, the United States will have spent $179 billion on this triad of nuclear weapons, which averages out to $20 billion per year. However, that figure does not include the complete cost of maintaining America’s nuclear deterrent.

In fact, the $179 billion is specifically for the direct costs of nuclear weapons and strategic launchers. This number also includes the majority of the costs of military personnel responsible for operating the equipment and carrying out nuclear missions.

But with President Trump’s increase in defense spending, we believe he’s going to perform the upgrades needed to provide a convincing deterrent to emerging nuclear threats.

One of the critical components in the United States nuclear upgrades is tritium, an isotope of hydrogen. This element is absolutely essential for the maintenance of current systems and the development of future nuclear weapons. With a decay half-life of 12 years, tritium must be replenished in existing warheads every few years.

Without being replenished, the nuclear weapons become duds.

Along with the costs of catching up on deferred maintenance, the United States will soon face a critical shortfall in tritium since the U.S. lacks domestic production of tritium sufficient to support our existing nuclear arsenal.

In the U.S., tritium is currently produced by irradiating rods in a specialized reactor operated by the Tennessee Valley Authority, which happens to run on low-enriched uranium. This single source presents a problem, as the TVA reactor does not produce sufficient quantities of the required tritium.

Existing reserves of low-enriched uranium will run out by the middle of the next decade. Of course, this is assuming that there are not new enrichment programs created by then. But absent any new programs, by 2030, the U.S. will be entirely reliant on imports of foreign low-enriched uranium. An additional problem is that many exporting countries will sell low-enriched uranium only for peaceful purposes.

The solution is to establish new low-enriched materials, which will require additional costs atop the maintenance and new system purchases. An increase in defense spending will allow funds for such research. The Trump administration has stated very clearly what their priorities are for spending, and the nuclear triad is at the top of the list.

The maintenance costs for the nuclear arsenal are not made public by the United States government. However, independent studies estimate that the total cost of maintaining our nuclear deterrents is $50 billion per year, but may possibly be higher.

Presently, there are estimates of $3.7 billion in deferred essential repairs to the United States’ nuclear weapons infrastructure outstanding.

As far as new projects go, it’s projected that new weapons will be procured and equipped for strategic platforms beginning in 2018. The complete data for projected expenses to upgrade the arsenal are also not publicly released by the United States government.

Decisions are currently being made in regard to which aspects of the arsenal will be upgraded. However, it’s projected that expenses will increase by more than $25–30 billion per year for procurement of the nuclear triad.

Some experts have prescribed a couple of steps that the Trump administration should follow to improve the nuclear deterrence program, afford upgrades and produce tritium. These are some of the steps you can expect to see:

Among the myriad of requirements before the Trump administration, defense spending on the upgrade of our nuclear triad will be a clear national priority and a global signal that America is positioning itself to remain relevant to the next century.