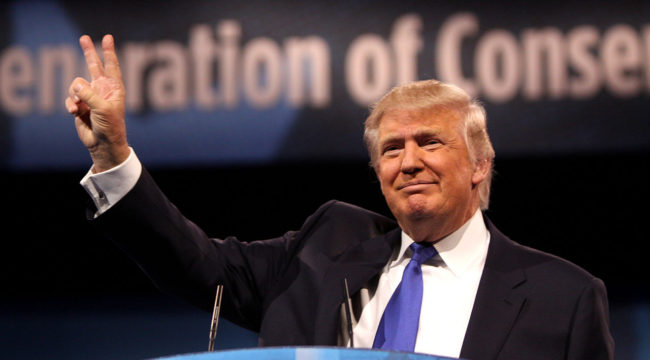 Trump's Our Kind of Candidate. Except He's Not.

As democracy is perfected, the office of president represents, more and more closely, the inner soul of the people. On some great and glorious day the plain folks of the land will reach their heart’s desire at last, and the White House will be adorned by a downright moron.
— H.L. Mencken, the “Sage of Baltimore”

Some claim that great and glorious day has already come and gone. “Reagan is all the evidence we need,” they say. Others see the smoking gun in Bush 43. Still others say the plain folk reached their heart’s desire when Obama adorned the White House.

We’re not sure. We don’t pay much attention to politics… or presidents. In fact, this is the time of year we urge readers not to vote at all. “Why encourage the bastards?” the saying goes.

But if Donald J. Trump is elected this November, who can deny Mencken’s great prediction will have come to pass… in all its coiffed and sound-bite glory?

Trump could also be one of the best damn things ever to happen to American politics. And for one simple reason: He’d take a hammer to the rotten political establishment. Like Churchill said of John Foster Dulles, Trump is a bull who carries his own china shop around with him.

If we didn’t have Trump, we’d have to invent him.

The Donald threatens to tear down the rickety scaffold of crony capitalism. He’d rather duel with Putin than spend a minute at a cocktail hour with Tim Kaine. He offends the pieties. Questions motives. Shrugs at national honor. No one, nothing, is sacred.

In other words, he’s our kind of candidate.

Limited government? Not under Trump. He promises to spend. A lot. Social Security, Medicare, education. Walls. He also wants to “rebuild” the military. We’d mothball much of it.

His economics? It’s been said Trump doesn’t read a lot. We don’t know. But maybe Melania could slip a copy of Henry Hazlitt’s Economics in One Lesson next to his pillow? (Then slip into something less comfortable. Like a nun’s habit.)

Immigration? Trump ought to know better than anyone that the immigrants he excoriates are willing to do jobs no one born in America will consider doing anymore.

If politicians all got struck with some mutant version of the Zika virus that made it biologically impossible to make campaign promises, we wouldn’t miss them for all the tea in China… provided we could still get our hands on some after the tariffs and trade moratoriums started gaining favor.

For her part in the spectacle, Hillary — so long pining to be leader of free world — is striving now to distinguish herself from Donald J. Trump by questioning his temperament.

“A man you can bait with a tweet,” Hillary Clinton said with confidence during her speech the other night, “is not a man we can trust with nuclear weapons.”

What a pity, she’s right.

Trump’s ghostwriter for The Art of the Deal, Tony Schwartz, recently blurted:

“I put lipstick on a pig,” he said. “I feel a deep sense of remorse that I contributed to presenting Trump in a way that brought him wider attention and made him more appealing than he is. I genuinely believe that if Trump wins and gets the nuclear codes, there is an excellent possibility it will lead to the end of civilization,” he added.

When asked what would Schwartz would retitle the book if he had to do it again?

Ah, what a wicked and sinful world we live in. Mark Twain supposedly said he’d choose heaven for the climate… but hell for the company. Something tells us he’d love Trump…

To the pundits who live inside the “Acela corridor,” Trump is the many-eyed monster with three heads and twice as many tails. The rest of America sees another Donald Trump. Below, David Frum tries to give voice to the Trump supporters who don’t often step foot in the northeast.

Mr. Frum is no stranger to controversy himself. As a speechwriter for George W. Bush, he allegedly coined the phrase “axis of evil” to describe the U.S. position on Iraq, Iran and North Korea. And helped to articulate the Bush administration’s case for a pre-emptive “shock and awe” invasion of Baghdad. Read on…