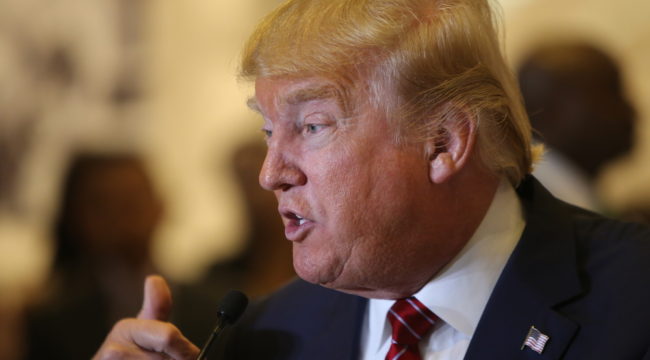 The Donald’s strong point isn’t his grasp of policy detail.

The nine page bare-bones outline released yesterday is nothing more than an aspirational air ball that lacks virtually every policy detail needed to assess its impact and to price out its cost.

It promises to shrink the code to three rates (12%, 25%, 35%), for example. But it doesn’t say boo about where the brackets begin and end compared to current law.

Needless to say, a taxpayer with $50,000 of taxable income who is on the 15% marginal bracket today might wish to know whether he is in the new 12% or the new 25% bracket proposed by the White House. After all, it could change his tax bill by several thousand dollars.

Similarly, to help pay for upwards of $6 trillion of tax cuts over the next decade, it proposes to eliminate “most” itemized deductions. These “payfors” would in theory increase revenues by about $3 trillion.

Then again, the plan explicitly excludes the two biggest deductions — the charitable deduction and mortgage deduction — which together account for $1.3 trillion of that total.

And it doesn’t name a single item among the hundreds of deductions that account for another $1 trillion of current law revenue loss. They’re just mystery meat to be stealthily extracted during committee meetings after Congressman have run the gauntlet of lobbyists prowling the halls outside.

Stated differently, after nine months of work these geniuses have come up with $6 trillion of easy to propose tax rate cuts and virtually no plan whatsoever to pay for them.

In fact, this latest nine pages of puffery contains just 1,500 words — including obligatory quotes from the Donald and page titles.

I hate to get picky, but the Donald’s team has been on the job for 250 days now. And all they came up with amounts to just three words each per day in office.

Worse still, even as this “framework” opens the door to unrelenting demagoguery from the Dems about helping the rich, it does virtually nothing for Flyover America.

And it surely leaves the rust belt workers who voted for Trump in western Pennsylvania, industrial Ohio, the Michigan auto belt and the manufacturing centers of Wisconsin and Iowa with absolutely nothing to show for their efforts.

That’s right. There are 122 million tax filers in the U.S. (or 83% of the total) with AGI (adjusted gross income) under $100,000. And they would get essentially zero net cuts under the vague scheme presented Wednesday. Most pay virtually no Federal income tax anyway.

But you would never have guessed that the new nine-page plan is one big nothingburger for the bottom 83% of taxpayers based on the Donald’s oratory at Indianapolis yesterday. He essentially preached a storm in favor of the “little guy.”

That is, the Donald’s narrative was the same old threadbare story which claims the average worker is being crushed by Federal income tax payments and gets unfairly tangled up in the complexity of the IRS code without the benefit of high-priced tax lawyers and loophole-savvy financial advisors.

Accordingly, the Donald promised to “unrig” the tax code for these little guys, thereby keeping faith with the millions of dispossessed citizens of Flyover America who voted for him last November.

Except, except… the whole Indianapolis narrative is essentially nonsense.

This isn’t 1981 and there is no raging inflation and bracket creep propelling the middle class into tax tyranny. In fact, owing to indexing and large increases in the standard deduction and personal exemption over the last 35 years, the income tax has essentially morphed into a Rich Man’s Tax.

Stated differently, the Donald’s new tax reform airball promises to make filing with the IRS more palatable to rank and file America. Yet 101 million taxpayers (69%) have no exposure to the complexity of the IRS code at all. They owe virtually nothing.

And I mean nothing. Among the 148 million income tax filers, the bottom 53 million owed zero taxes in the most recent year (2014), and the bottom half (74 million) paid an aggregate total of just $45 billion.

So let me be very clear. There was still $4 trillion left in the collective pockets of these 122 million taxpayers — even after the IRS had its way with them!

Now, I do not object to putting some of that $802 billion back into the pockets of the top 4% — given that many of them are small businessmen and the proverbial “job-creators” who make the economy grow.

But incentivizing the job creators in this manner should not be financed on the backs of future taxpayers via borrowing. It must be paid for with spending cuts as a first resort, and less onerous taxes — such as consumption taxes.

Even if a Keynesian demand side tax cut was a good idea, which it isn’t, the fact is there is not much more that could be put “back in their pockets” by means of income tax cuts.

So the truth is, you could have scratched this so-called “framework” on a yellow pad in one hour on January 20 if you had even a general grasp of Trump’s vague campaign promises.

But had you stopped there you should have been promptly fired because in the form presented Wednesday the plan is a minefield of unanswered questions. It will tie the Congressional tax-writing process in knots for months to come — if not indefinitely.

Beyond that, there is another factor that shows why the Donald is barking up the wrong tax tree. The Fed has generated such gigantic financial bubbles and caused all financial assets to become so massively overvalued that incentives for the rich are not really in short supply.

Stated differently, Janet Yellen and the other Keynesian liberals on the Fed have generated more “trickle-down” wealth and rewards than the Gipper could ever have imagined back in 1981.

The $45 trillion in household wealth gains since the 2009 bottom — which has overwhelmingly accrued to the top tier of households which own most of the financial assets — vastly overshadows any possible benefits from lower tax rates, even at the top of the income ladder.

If the bottom 83% don’t pay much tax in the first place, and if the top 4% who pay most of the taxes are not to be indulged for social policy/equity purposes, what’s the point of the whole income tax cut charade?

In fact, that’s why after nine months the Trump tax plan is still a 1,500 word air ball.

What it actually amounts to is amateurish stumbling around the K-Street corridor where every single “loop-hole” that can’t be named will be shot down.

In all, this plan is so embarrassingly weak that Mnuchin and Cohn should be fired on the spot.

Yesterday also demonstrates why the casino is such a dangerous fantasy land. It rose to yet another all-time high Wednesday apparently on the back of a tax cut plan that is virtually guaranteed to eat itself alive on Capitol Hill.

The chickens are coming home to roost. Indeed, if such domestic fowl could fly Washington’s skies would soon be dark with them.