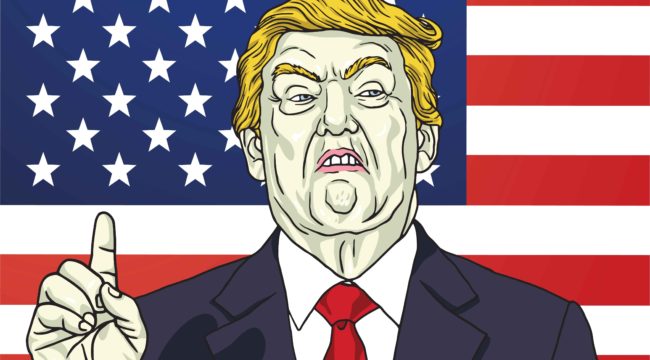 It made for a good show — but worked only light damage.

That is, the United States and its allies can gloat about their blow for civilization.

But it didn’t weaken the Assad regime or challenge the Russians.

Thus WWIII has been postponed… until further notice.

The markets breathed their sigh of peaceful relief yesterday.

The business continued into today.

But a different form of war cloud still hangs about markets — that of a trade war and a related currency war.

And yesterday President Trump beat his war drum once again:

Russia and China are playing the Currency Devaluation game as the U.S. keeps raising interest rates. Not acceptable!

Is the president right?

Are the Russians and Chinese devaluing their currencies to seize an exporting advantage?

Here we find Mr. Trump at outs with his own Treasury Department.

Neither China nor Russia has done the crime, says last Friday’s Treasury report.

True, China did crack Treasury’s “monitoring list” — but Russia failed to make the grade at all.

And yes, the Russian ruble has declined more than 9% against the dollar in the past year.

But do not look to Russian satanry for the answer.

Look instead to American sanctions on dozens of Russian businesses and Mr. Vladimir Putin’s cronies.

Much of the ruble’s decline followed the imposition of these sanctions.

More Russia sanctions may follow yet… depending upon who has the president’s ear on any given day.

But what about China — are they at their devaluation tricks again?

If so, it has been a strange devaluation indeed.

The yuan has in fact gained 10% via the greenback over the past year.

And if anyone has worked the devaluation angle, our adversaries may counter… it is the American president himself.

Mr. Trump has repeatedly jawboned the dollar lower on behalf of American exports.

“It’s very, very hard to compete when you have a strong dollar…” the president has argued.

And Trump’s laborings may have effected the trick.

The Bloomberg Dollar Spot Index has fallen more than 10% since [Trump] came to power. He mentions interest rates but, on a total-return basis, the dollar has been the worst-performing currency in the world since his inauguration… Economic fundamentals suggest that dollar depreciation has been excessively rapid.

Maybe the dollar isn’t the muscle-bound Atlas Mr. Trump would have us believe.

And the president might be careful with his wishes…

Viraj Patel, ING research analyst, suggests that an official lampooning of the dollar may result in a “sell America” bias:

History shows how U.S. officials talking down the dollar can escalate into a “sell America” bias — with a coordinated sell-off in U.S. assets (including U.S. stocks).

If it’s a bouncing stock market the president wants, he might consider that history.

It lines up behind Patel:

The impact on stock markets around the globe during these dollar regimes is stark… A strong dollar propelled U.S. stocks to huge absolute and relative outperformance starting in the mid-1990s and once again starting during the financial crisis. When the dollar fell during the mid-2000s, we saw this relationship reverse.

We do not pretend to know the proper value of the greenback.

But as an American patriot, let us raise our three cheers to a strong United States dollar…

Any damn fool country can have its currency.

But who wants the currency of just any damn fool country?

We are proud to claim citizenship in a republic whose hearty currency is desired the world over.

A strong U.S. dollar is therefore a point of pride… a global vote of confidence in our fruitful and righteous land.

Let the strong dollar stand beside the Statue of Liberty as a beacon to mankind.

In brief: You can put us down for a strong dollar.

It has nothing whatsoever to do with the fact that a stronger dollar equals cheaper gasoline in our fuel tank. Cheaper salt in our stew. Or cheaper wine in our veins.

No… it has nothing whatsoever to do with our personal enrichment.

Our concern is the national honor and nothing else.