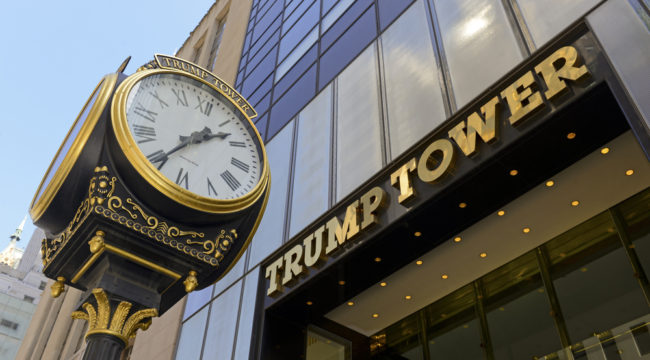 Saturday is the president’s 100th day on the throne.

And Trump strikes us as a fellow sweating to get something done, against some sort of odds.

His own party reformed health care reform into the wastebasket…

A critical plank drops the U.S. corporate tax rate from a punishing 35% to a relaxed 15%.

Trump says a 15% rate would take American business off its tether… lift its spirits… give it a leg up in global markets.

But if he stumbles this time, it could be a hard road back for the great deal-maker.

The Tax Policy Center, for example, says cutting the corporate rate to 15% would cost Uncle Samuel $215 billion in 2018 alone.

And gut federal revenue by $2.4 trillion over the next decade.

Or rather, it would gut federal revenue by $2.4 trillion if spending isn’t cut by a similar amount.

But cutting spending in Washington — real spending — is to swim the Potomac in a suit of armor.

Or they’ll have to raise taxes somewhere else to make the shortage good.

JPMorgan says Trump’s tax plan “will be virtually impossible to pass through Congress.”

On health care, you had irreconcilable differences on the scope of government. And in the same way here, whether or not you pay for a tax cut is a fundamental difference Republicans have. And what we could see Wednesday is that there isn’t even as much middle ground on taxes as there was on health care.

“I don’t know if he can get away with it,” argues Sen. Orrin Hatch, head of the Finance Committee.

Another frisky tomcat Trump will have to collar: House Speaker Paul Ryan.

“Not only can that not pass Congress, it cannot even begin to move through Congress,” chuffed George Callas, Ryan’s senior tax counsel.

“This is something that actually cannot be done,” he added by way of emphasis.

Ryan has instead proposed a “revenue-neutral” 20% rate.

For what it’s worth, Ryan said this afternoon that “We’re in agreement on 80% and on the (remaining) 20% we’re in the same ballpark.”

But that could be a cavernous ballpark.

Team Trump argues the tax cut can pay for itself through the growth effect.

You could have as high as a $2 trillion difference in revenues depending on what you think is going to be the growth function. The plan will pay for itself with growth.

No need for unpopular spending cuts.

All gain, no pain, that is to say.

And pure catnip to politicians.

And he finds it full of holes.

David hawks the old-time fiscal religion, the religion of the tight ship and the tighter purse.

But not without offsetting spending cuts.

He says the GOP has become “the free-lunch party of tax cuts.”

In their best-seller Empire of Debt, Bill Bonner and our fearless leader Addison Wiggin explain why old fuddy-duddies like David chirp their gospel to a deaf congregation:

The trouble with traditional conservative economists was that they were always pointing out the true cost of things. “There’s no such thing as a free lunch” was practically tattooed on their foreheads… This attitude made conservative economists deeply unpopular. They were, after all, party poopers. Who would want such a killjoy around?… The essence of politics was promising things that couldn’t be delivered honestly.

Now, it’s entirely possible that Trump works the art of the deal and bags enough cats to hammer some kind of compromise tax deal.

Happy hands would clap. There’d be more joy in heaven…

President Trump would have his victory.

But if they can’t reach a deal, if Trump flops again, he could be in for a long four years…

And the president would himself get a painful lesson himself in The Art of the Deal...