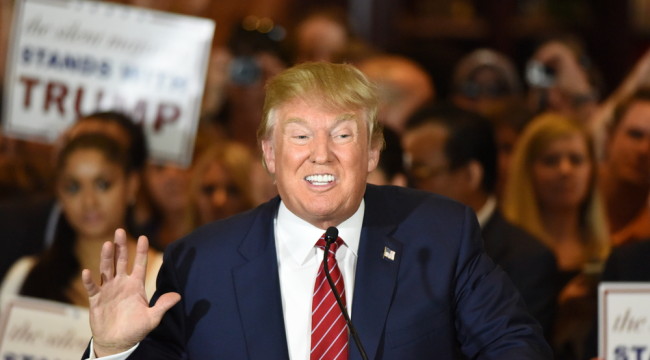 Trump - Too Rich to Steal... Too Dumb to Lie

PARIS – Paris is getting ready for Christmas…

Garlands, lights, stars – the city is festooned for the holidays.

One of the nice things about Europe is that the seasons are exaggerated, at least compared with Baltimore. The days in summer are longer. In winter, it is dark long before the cocktail hour.

As Christmas approaches, people gather in neighborhood bars and cafés lit up… gay… and cheerful.

We sat in a café yesterday, enjoying the friendly buzz and waiting for the phone to ring. But we got no call from Donald Trump thanking us for our support in yesterday’s issue.

Too bad. We were going to offer him our campaign slogan (if we ever lost our mind and decided to run for public office): Too Rich to Steal… Too Dumb to Lie.

After reading yesterday’s Diary, readers wrote to tell us that we were defective mentally.

And who knows? They’re probably all right.

But give the tycoon credit. In these days of waffling, poll-watching, bribe-sucking, on-one-hand-this-on-the-other-hand-that politicians… he alone is not afraid to take a position that marks him as a foursquare, straight-up jackass.

Is that why he is the Republicans’ front-runner?

Ah, the Trump phenomenon is worth exploring… more below…

In Gold We Trust

Our lead researcher, Stephen Jones, predicted back in August that stock markets would enter a “dramatic” decline that would likely begin within three months.

We will have to wait a little longer to find out if he was right. But the rally that began in March 2009 appears to be running out of steam.

As we reported yesterday, expansions do not last forever. And this one has already run twice as long as the average.

Gold, meanwhile, has been so lethargic we stopped paying attention. When we looked yesterday, it took $1,072 to buy a single ounce.

That’s way down from its high… and way up from its low.

We are gold bugs… but we’re not necessarily gold bulls.

We have more faith in the precious metal than in the Deep State PhDs who run U.S. financial policy.

But is the current price too high? Too low? Will it go higher?

The world economy seems to be slipping into a slow, sluggish, and slumpy pattern.

No need to worry about inflation – at least in the near term.

So, no need for gold to protect you from higher consumer prices.

But the financial quacks have made such a mess of the global money system that it could melt down or blow up at any moment.

Who knows what will happen? But when we come out the other side, we predict that gold will be as shiny as it was when we went in. Maybe shinier.

We further predict that the reputations of Ben Bernanke and Janet Yellen will be considerably tarnished.

Our advice remains the same: Hold some gold. Hold some cash. Hold some bricks and mortar. Hold some equity in solid businesses. Call your mother… pet your dog… and be happy.

France has its own Trump. More polished. Better looking. Not as rich. Marine Le Pen was the big winner in France’s regional elections. Her party, the Front National, led the field.

Like Trump, Le Pen’s signature position is that she wishes to make France strong again… by keeping out foreigners.

A poster of hers can be seen all over Paris. It shows two women. One is rather typically French. The other is wearing a black burqa, so we see only the eyes. “Who do you want for a neighbor?” the headline asks.

The establishment is alarmed. It is a “dangerous and divisive movement,” says a Financial Times editorial. It is “crudely xenophobic,” it continues. The mainstream parties “need to act quickly” to head off this threat from the “far right.”

Critics say Le Pen’s program would undermine the European Union… it would kill the euro… it would send the economy into a recession!

Neither Trump nor Le Pen care enough about an economy to really figure out how it works. Their proposals – as near as we can figure them out – are typical socialist claptrap. If put into place, they would probably be even worse than the status quo.

And yet… Le Pen and Trump have something going for them: They’re not Hillary Clinton, Jeb Bush, or François Hollande!

They’re not the establishment. They’re not beholden (as far as we know) to the elites, the Adelsons, the oil industry, or Goldman Sachs. Neither the cronies nor the zombies have them entirely in their pockets.

Besides, they’ve earned the contempt of the New York Times, the Financial Times, Le Monde, and the Wall Street Journal, so they can’t be all bad.

They are not members of the political elite. And deep down, the public knows something is wrong. It knows the game is rigged against them. It knows the fix is in…

…and it looks to Trump and Le Pen to set things right.