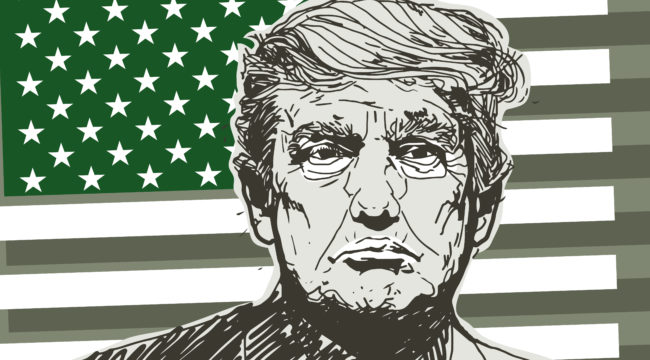 But his recent tariff plans have taken much of it away…

Several months of stock market gains have vanished into the electricity.

Now Trump is taking away yet again… this time through Amazon.

Trump insists Amazon is strong-arming the retail industry into bankruptcy.

And its low-cost delivery horns in on the meager profits of the United States Postal Service.

A worse gang of scrapepennies and sharpers and cutthroats never stalked this Earth.

It “must stop,” the president thundered.

Even Amazon recovered today – up 20 points.

But like the pit bull with the stick between its teeth, it does not appear President Trump will let Amazon go…

“He’s off the hook on this. It’s war,” one unnamed inside source told journalist Gabriel Sherman.

Bezos, recall, happens to own the fiercely anti-Trump platform known as The Washington Post.

Trump sees The Washington Post as the unofficial leader of the resistance to his administration. The president has even referred to the newspaper as the “Amazon Washington Post.” And he knows it’s been out to get him.

Trump’s logic is simple. Most of Bezos’ net worth is tied up in Amazon stock. In the world of billionaires and powerful politicians, the way to hit someone hard is in the pocketbook.

We might remind the president that Amazon is the third-largest American stock on the exchanges, trailing only Apple and Alphabet (Google, essentially).

He therefore risks clipping one of the geese that’s spitting out the golden eggs.

Trade war concerns have markets on a teeter-totter as it is.

And if Trump brings Amazon low — or even tries to — the stock market of which he is so proud could come tumbling down around him.

Do we thus detect an echo of a tragic Shakespearean figure in America’s 45th president?

That is, could his blind zeal for vengeance bring about his own undoing?

“From this time forth,” as Hamlet raged, “my thoughts be bloody, or be nothing worth!”

Hamlet got his revenge. But at the price of his life.

He must first wield power.

As president of the grandest republic history as ever witnessed… does not Trump qualify?

A tragic figure must also possess a fatal flaw.

Some possibilities immediately suggest themselves.

We would never claim the president suffers from them.

But a scalawag unburdened by our sense of comportment might suggest, for example, pride… recklessness… overconfidence.

If he put his brain to it, he may be able to list more.

Infidelity to the marriage bed, perhaps — but let it go.

“I am a man more sinned against than sinning,” cried King Lear.

Lear often responded to offenses with rage and cursing insults.

Trump responds to offenses with rage and tweeted insults.

We listed the two primary qualities of a tragic figure — he must first be a powerful figure — and embody a fatal flaw.

Yet a tragic hero requires a third component:

He must also suffer a downfall.

Trump has yet to suffer his downfall — despite the best efforts of the Democratic Party, the “Deep State” and the media.

But if the president brings about a stock market collapse… who knows?

Let us conclude with another reflection on tragic heroes…

“A man cannot become a hero until he sees the root of his downfall,” said Aristotle.