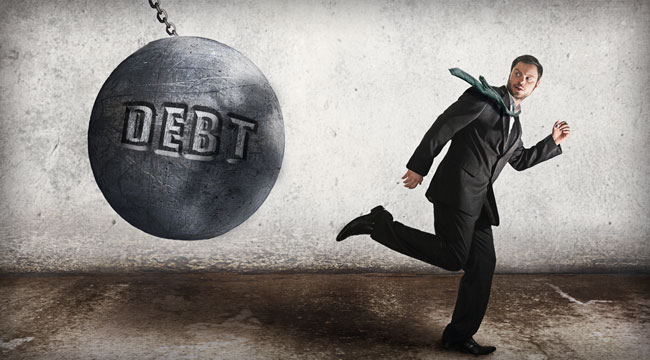 The "Trump Reflation Trade" Is For Chumps

If you need any evidence that the world’s central banks have destroyed honest price discovery in the financial markets, the last few days have provided it in spades.

The nearly $2 trillion sell-off in the global bond markets since last Tuesday was warranted but happened for the wrong reasons, while the 600 point gain in the Dow index gives stupid a whole new definition.

In fact, the whole preposterous episode reminds us once more of my watchwords at my Contra Corner blog: Sell the stocks, sell the bonds, buy some gold and get out of the casino!

As Bob Dylan should have described it — a hard financial rain’s gonna fall.

What we were told by the Wall Street snake oil peddlers, of course, was that it was all about the return of “good” inflation and fiscally-stimulated “growth.”

Indeed, this blinding insight apparently struck at exactly 2:00 a.m. election night. That’s when the market suddenly discovered that Donald Trump’s shocking election victory would not be a disaster for stocks — which it flashed just 3 hours earlier by the 800 point sell-off in the futures market — but meant that it was time to back up the truck because a new mega-dose of stimulus juice was heading straight for the casino.

That’s right. Donald Trump in cahoots with the Tea Party Republicans and the GOP establishment regulars led by Speaker Paul Ryan, who only 24 hours earlier had finally managed to mention the GOP presidential candidate’s name in public, would soon be flooding the economy with giant tax cuts and a huge infrastructure spending program.

And that’s to say nothing of more defense, walls on the border and happy days of budgetary red ink all around.

Folks, the whole Trump reflation trade is based on blithering nonsense.

Uncle Sam will be stimulating exactly nothing in the years ahead because he is dead broke.

Moreover, even before Barack Obama ambles out of the White House, suitcase in hand, the Trump/Ryan-regulars/Tea Party gang will soon be lined up in circular fashion firing furiously.

But it won’t be at the ballyhooed stimulus. It will be at each other as the looming expiration (March 15) of the nation’s $20 trillion public debt ceiling crashes upon the smoldering ruins of the beltway establishment.

In fact, the towering national debt and the exploding annual deficit are the twin elephants in the room. In fact, here is the bombshell that will hit Washington around February…

Even without an assumed recession, the updated Congressional Budget Office (CBO) deficit projections will soar past $1 trillion annually by the later years of Trump’s (only) term.

Once this becomes evident, the honeymoon will be over. Washington will descend into bitter clashes over every single aspect of fiscal policy — and the battle between stimulus and austerity will erupt like at no time since 1981.

Under those circumstances, there will be no 100-Day plan to reflate the U.S. economy. They will not even be able to kick the debt ceiling can long enough to buy time to enact some kind of Trump tax cut/infrastructure/fiscal stimulus.

Instead, the coming spring and summer will bring to the Potomac a recurring crisis of brinksmanship, government shutdowns and unprecedented, publicly-discussed uncertainties about what government bills will be paid and which will be stuffed in the drawer after the frozen March 15 debt ceiling has been breeched, and all the short-term accounting gimmicks have been used up.

The summer of 2017 will make the crisis of 2011 look like a Sunday School picnic. Back then the markets got so rattled that they dropped by nearly 18% between May and the August bottom.

But unlike the present, the debt ceiling crisis back then was finally resolved at a time when the so-called recovery was just getting started. There was still great confidence in the efficacy of the Fed’s giant QE stimulus and the just completed $800 billion Obama fiscal stimulus was thought to have turbo-charged the rebound.

Under those circumstances, the debt ceiling compromise was seen as a legitimate exercise in “buying time” so that “growth” could eat away at, and presumably eliminate, the out-year deficits.

As I have said repeatedly, however, that debt ceiling extension was not a “compromise.” It was a nasty fiscal stink-bomb put in place to ensure that within weeks of inauguration the next administration would be dutifully at its appointed job of raising the trillions of borrowing authority needed to keep the Washington leviathan — the Warfare State and the Welfare State — in business and fully funded.

In that regard, the sheer naiveté of Team Trump is something to behold. They think they are heading to Washington to Drain the Swamp.

Not a chance. They soon will be drowning in it.

That kind of political chicanery embedded in the current debt ceiling stink bomb, of course, has long been par for the course on Capitol Hill, but here’s the thing. The Trump victory notwithstanding, the GOP back benchers and the Tea Party activists have now come to realize that the recurrent debt ceiling deals since 2011 have all been rank fiscal frauds.

Not surprisingly, therefore, the House GOP voted 167-79 against the so-called Boehner-Obama deal in October 2015. The latter passed by virtue of a 187-0 vote among House Democrats, who were self-evidently expecting to retain the White House in 2016.

Only the incredibly naïve can believe that any of these Democrats will vote for a Trump debt ceiling increase tied to a sweeping Trump tax reduction, which will provide half of its $300 billion per year benefits to the top 1% and nearly three-fourths to the top 5% of U.S. taxpayers.

And that will be especially true of a shell-shocked Democratic party, which by then will have been taken over by the Sanders-Warren-progressive wing in a post-Clinton power struggle.

At the same time, there is not a snowball’s chance that the Trump White House could get even half of the House GOP’s 241 members to vote for a multi-trillion national debt ceiling increase tied to a massive, Democrat-pleasing infrastructure bill, but one without major income tax reductions.

And that’s especially the case because unlike the debt ceiling exercises since 2011, the deficit projections are now heading sharply higher — after rising 35% to nearly $600 billion in the fiscal year just ended.

Stated differently, on the fiscal front there will be far fewer votes for kicking the can uphill. And that will be especially true now that the Fed has stopped monetizing incremental debt and the so-called “rising” dollar will be forcing the Bank of Japan, European Central Bank and People’s Printing Press of China to do the same.

In short, the central banks are nearly out of business and that means the bond vigilantes are rising from their 25-year old grave. The drastic 4-month run-up of the 10-year U.S. Treasury yield from 1.35% at the post-Brexit bottom in July to nearly 2.3% Monday is only a foreshadowing of the bond bubble crash lurking just around the corner.

With deficits and bond yield soaring and the bond vigilantes having an unexpected arrival in some kind of fiscal rapture, the GOP House is destined to become a killing field not only for the Trump fiscal stimulus, but for any form of orderly fiscal governance at all.

Indeed, the current CBO baseline forecast projects $9.3 trillion of cumulative deficits over the next 10 years, but even that is phony baloney. It assumes no recession for 206 months running — an occurrence that has never occurred in human history. It also counts more than $2.5 trillion of out-year spending cuts and expiration of tax loopholes that Congress has no intention whatsoever of permitting to occur.

If you simply substitute a replay for the last 10-years for the Rosy Scenario economic assumptions in the current CBO baseline and eliminate the phony deficit reducers embedded in the baseline budget, you end up with a minimum $15 trillion of additional public debt by 2026.

That is, the U.S. already has objectively speaking a $35 trillion — not $20 trillion — national debt, which will amount to 145% of GDP by the middle of the next decade.

So there will be no fiscal stimulus whatsoever. The ruling establishment which brought the nation to this sorry state has been repudiated, but not replaced.

Even the day traders and robo-machines will soon recognize that the Fed is out of dry powder and that the fiscal branch of government is heading into unrelieved chaos.

Accordingly, it is only a matter of weeks — or months at most — until the third great bubble collapse of this century begins in earnest.