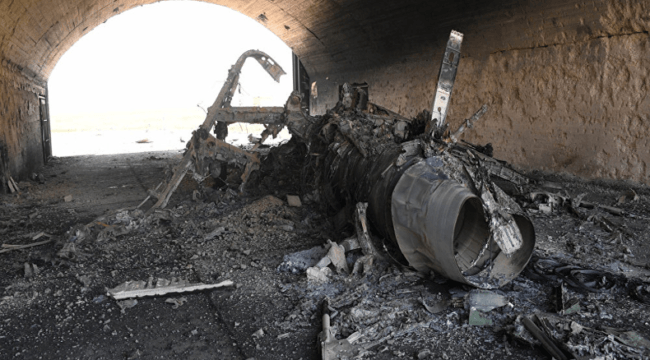 It appears we have erred propter falsos testes — on account of poor information.

We claimed Friday that the U.S. missile strike had destroyed the Syrian airfield that allegedly launched last week’s chemical attack.

But U.S. officials admit that same airfield already opened for business again — just one day after the raid.

A Navy spokesman said the raid didn’t target the runways, since they can be rapidly repaired.

The Navy claims 58 of the 59 Tomahawks it launched struck their targets.

But the Russians say only 23 of the 59 missiles found their mark. A Russian general taunted that “the combat efficiency of the U.S. strike was very low.”

We invite you to draw your own conclusions.

Meanwhile, U.S. ambassador to the United Nations Nikki Haley raised the prospect of further attacks: “We are prepared to do more.”

But only if necessary, she added.

Of course. Only if necessary.

But as you’ll see, “doing more” — even if necessary — might bring its own nasty set of consequences.

More on those in a moment.

But first… how’s the market reacting to the latest contretemps?

The Dow’s up two uncertain points today. The S&P just one. The Nasdaq added three.

Oil’s up 85 cents today, while the safety trade — gold — is down a buck forty.

Now, the Russians didn’t interfere with last week’s attack on the Syrian airfield. But if there’s a next time, per Ms. Haley, that could change…

Russia’s Prime Minister Dmitry Medvedev barks the U.S. is now “one step away from military clashes with Russia.”

Russia has also suspended a 2015 agreement designed to prevent incidents between U.S. and Russian aircraft.

So much for that Trump-Putin lovefest.

And in a joint statement with Russia’s Assad-supporting Iranian ally, the two nations affirmed next time, they would “respond with force”:

What America waged in an aggression on Syria is a crossing of red lines. From now on we will respond with force to any aggressor or any breach of red lines from whoever it is and America knows our ability to respond well.

But some suggest last week’s raid was really a message for a broader audience, delivered by way of the back door.

China for one. North Korea for another.

Many analysts believe North Korea’s developing the ability to strike the U.S. West Coast with nuclear missiles. And diplomatic options are fading.

Retired four-star Gen. Jack Keane, for example, told Fox News Washington is “rapidly and dangerously heading towards the reality that the military option is the only one left.

And Trump’s warned China that if it doesn’t do more to bridle its North Korean client’s nuclear program, the U.S. will take unilateral action.

Military action, that is to say.

Was it coincidence that Trump ordered the Syrian attack when Chinese President Xi Jinping was coming to town?

Reva Goujon is vice president of global analysis at Stratfor, an outfit specializing in geopolitics.

Her interpretation, via CNBC:

“This is Trump saying, ‘No, I am a man of my words. When I make a threat, I will follow through.’ That’s certainly something the Chinese and North Koreans will be thinking about.”

“I think it definitely raises the stakes for China in looking at what the U.S. might do about North Korea,” adds David Dollar, senior fellow at the Brookings Institute.

China hasn’t said much about the U.S. attack.

But North Korea sure got Trump’s point — they took it right on the chin!

“The reality of today proves our decision to strengthen our military power to stand against force with force was the right choice a million times over.”

The message, clear as gin: That decision to “strengthen our military power” means nuclear weapons.

What to make of Trump’s actions?

Some say Trump’s playing 3-D chess while his opponents are limited to checkers. A clever fox, this Trump, always one or three moves ahead.

Others say he’s just a bull in a china shop.

Or worse, as Winston Churchill supposedly said of former U.S. Secretary of State John Foster Dulles — “a bull who carries his own china shop around with him.”

We’ve been keeping two sets of books on President Trump…

We can’t yet tell if he’s fox or bull.

Maybe he’s neither… or both.

But with so much at stake these days, we just hope he’s got a little bit of owl in him…