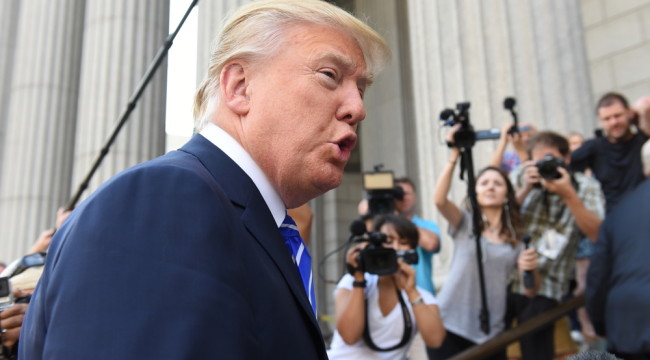 The Ides of March have come.

Yes, Caesar… but not gone.

BALTIMORE – The Dow was up a piddly 15 points yesterday. But nobody was watching. All eyes were on the U.S. presidential primaries…

It’s another big day in the primaries. Florida, Illinois, Missouri, North Carolina, and Ohio all go to the polls today.

Very likely, we will find out who will be the Republican and Democratic standard bearers in November’s presidential elections.

Normally, it wouldn’t matter much. The two parties are close on the things that really matter; both are committed to keeping the hustle going.

What is interesting about this year’s primaries is that there are two candidates who seem to be unwilling to play the game. At least, that is how the press and commentators are describing it.

We’re always in doubt, of course. But this time, we’re not so sure. We’re not holding our breath for any of the candidates to take on the Deep State…

Sanders’ positions are simple. What’s more, they are coherent.

That message seems to click with a lot of voters – especially the young… and those who’ve never been to Sweden.

Both groups have generous delusions. They believe their lives could be improved with more of other people’s money and fewer of other people’s ideas. And Sanders, the man, appears to be completely reasonable… with an entirely predictable program.

We’ve been struggling with it for weeks.

Reading the Diary mailbag, dear readers give us insights. They believe Trump will “set things right.” Or that he’ll “shake things up.” They think his way of expressing himself is “honest” rather than vulgar… and that his policy prescriptions are “fresh” rather than absurd.

Perhaps they are right. Maybe, by force of personality, or instinct, Mr. Trump will make a success of running the U.S. just as he has – according to his own account at least – of his commercial empire.

Trump crossed the East River and conquered Manhattan, didn’t he?

He led his legions across the desert to Las Vegas, too… and triumphed again, didn’t he?

He rides a white horse, doesn’t he?

The dramatic tension in this narrative comes from the fact that Mr. Trump has signaled to the powers-that-be that he will not be a pushover or a rubber stamp.

Though he seems ready to “kick ass,” he promises to be choosy about whose ass he kicks. As for Israel, and our other allies, he suggests he’ll let them do their own ass kicking at their own expense.

We’re the policemen of the world. We take care of the entire world. We’re going to have a stronger military, much stronger. Our military is depleted.

We have 28,000 soldiers on the line, on the border between North and South Korea. We have so many places. Saudi Arabia was making a billion dollars a day, and we were getting virtually nothing to protect them.

This point of view is not unreasonable. And it is not far from the traditional Republican position. But it’s a long way from the rest of the candidates, the Republican leadership… and its major donors.

Driving up from South Carolina on Saturday, we passed through the Route 66 corridor west of Washington and dipped around the beltway through the Virginia suburbs before crossing the Woodrow Wilson Bridge into Maryland.

On both sides of the road, you see new office buildings, malls, and housing developments. Residential or commercial, the property all sparkles with the new and outsized wealth of the Deep State. This is the heartland of the “security” industry… the “military-industrial complex” that President Eisenhower warned us about.

Mr. Trump’s enthusiasm for war is apparently not keen enough. The Establishment seems convinced that The Donald would be bad for business. They have their long knives out.

In Commentary magazine, warmonger Max Boot told readers that Donald J. Trump is the “No.1 threat to American security.”

“Many Republicans will hold their nose and vote for Hillary,” says Barron’s.

And almost the whole Fourth Estate has worked to discredit the billionaire candidate… linking him to the Ku Klux Klan… illegal Polish aliens (two decades ago)… racism… Hitler… vulgarity… incitement of violence… anti-Israel… bankruptcy… hypocrisy… About the only thing he hasn’t been accused of is public drunkenness.

So far, none of the calumnies have struck a vital organ. Trump, like Caesar, still rides high. But the Ides of March are not over. As always, we wait to see what happens next.

If it can’t accept it… then what?