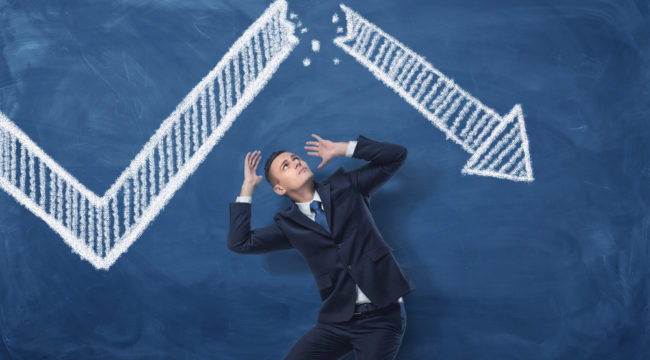 Fact #2: History says Trump will experience a recession during his first year in office.

Which is more likely? First No. 1…

The latest “dot plot” shows the Fed expects to hike rates three times this year. And in a recent speech in San Francisco Janet Yellen said the Fed expects to raise rates “a few times a year” until rates near 3% by the end of 2019.

“Labor utilization is close to its estimated longer-run normal level,” she babbled. Babbling further: “We are closing in on our 2% inflation objective.”

Just so. But consider…

Which brings us to fact No. 2…

A fellow answering to the name Raoul Pal is a former hedge fund wiz and current honcho of Global Macro Investor, an independent financial research firm.

In November, he crunched a bunch of numbers stretching back over a century. And he arrived at a humdinging conclusion:

History shows there’s a 100% chance of recession before next January.

Why? Because Obama was a two-term president. That’s the answer. The prosecution presents the following as proof thereof:

Again: a 100% chance, this fellow says. Not every new president gets the raw deal, mind you — just those following two-term presidents:

Remarkable. Mr. Pal can’t explain it for sure.

Tough darts for Trump if true. He’s already taking it from all sides. Now he’s got 107 years of history breathing down his neck.

Of course, that very same Dow broke through another round number 17 years ago — the 10,000 mark. Just in time for Johnny-come-lately and his eighth cousin to lose their shirts in the dot-com wreck. A cautionary tale perhaps.

So… Is history right? Will Trump get stuck with a big fat recession this year?

After careful deliberation our answer is 100% yes. We also find our answer in history… but not this Pal fellow’s history. We base it on this history…

The Fed can’t even predict tomorrow’s sunrise. Its forecasts are spectacularly, uproariously, riotously wrong… year after year… after year.

It forecast the U.S. economy to grow about 4% near the beginning of each year for something like five of the past six years. But every time, it had to walk back its forecast to about 2%.

Now it’s predicting three rate hikes this year. But going into 2016, it forecast four hikes. How many did it deliver? One. And barely, at that.

“The market recognizes that the Fed has repeatedly erred on the optimistic side,” said economist Eric Lascelles, by way of understatement, before really giving them the business. “Fool me 50 times, but not 51 times.”

Fifty times is plenty for us. So take it to the bank: There’s a 100% chance of recession this year.

Just listen to the Fed.

The funniest part is that if it goes ahead with its rate hikes at a time the economy can’t afford them, it could actually cause the very recession it says it wants to avoid.

Below, Jim Rickards shows you why Trump needs Janet Yellen to cooperate if he has any hopes of getting his agenda through. Will she go along with the program? Read on.