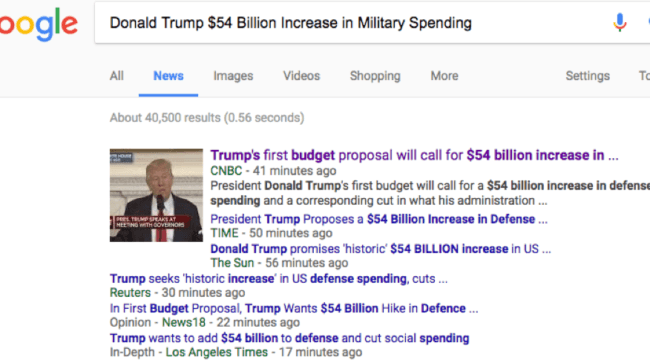 We’re at a Critical Point in the Military-Tech Cycle

[Ed. Note: Jim Rickards’ latest New York Times bestseller, The Road to Ruin: The Global Elites’ Secret Plan for the Next Financial Crisis, is out now. Learn how to score your free copy here. This vital book transcends geopolitics and media rhetoric to prepare you for the next crisis in the event of an ice-nine lockdown.]

Donald Trump has signaled one of his chief policy aims is to substantially increase defense spending. His $54 billion request from Congress may go down as a watershed moment — a window of opportunity that’s only opened five times in the past 60 years.

There are maybe five eras in U.S. history after the obvious case of WWII that you can point to as a preview of what’s just ahead: Right before the Korean War…before Vietnam… during the Reagan-Era buildout… and after 9/11. 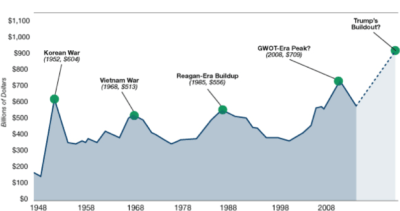 Military technology advances in long-cycles driven by politics and procurement. After the Vietnam War, for example, the American military drew down and spending was cut in the late 1970s. This was followed by the shock of the Russian invasion of Afghanistan.

After U.S. victory in the Cold War in 1989, and the First Gulf War in 1991, another cycle of contraction began in the Clinton administration. Defense spending was slashed dramatically in the 1990s.

Then came the shock of the 9/11 attacks and the Global War on Terror. This started another expansion phase including the Wars in Afghanistan and Iraq.

These wars saw the rise of “net-centric warfare” in which every warrior, commander and logistics provider is connected in a web of sensors, wireless communications and high-speed processors combined with artificial intelligence and predictive analytics to anticipate enemy moves and allocate resources in an optimum manner.

With the Obama administration another draw-down began and the military was starved of resources to maintain our vast superiority over all adversaries. We are still superior to the Russians and Chinese but the gap is getting dangerously thin.

Now, with the new Trump administration, America is about to embark on the third wave of military technological advancement.

The first wave was the Reagan-Bush 41 era of Star Wars and precision guided munitions.

The second wave was the Bush 43 era of net-centric warfare.

The third wave will be the Trump era of game-changing technology ready to emerge from the laboratories and go physical in the battlespace.

By the way, you’re probably reading this message on the internet through email or a website. Did you know that the internet was invented by the Pentagon as a project of the Defense Advanced Research Projects Agency (DARPA)?

Did you know that one of America’s most effective counter-terrorist programs was developed from a system designed to catch card counters at blackjack tables in Las Vegas? (That system was called “NORA” for Non-Obvious Relationship Awareness).

Did you know that the CIA has its own venture capital company that invests in Silicon Valley start-ups?

It’s called In-Q-Tel. (The “Q” is a tribute to the man who supplies cool gadgets to 007 in the James Bond films). In-Q-Tel was the sponsor of Project Prophesy where I was co-project director.

Defense industry insider Kevin Massengill and I are now using Project Prophesy as our analytic inspiration for the analysis in Defense Technology Alert.

Of course, the GPS maps and location services on your car dashboard or smart phone were originally developed for the Navy to guide ships at sea.

The internet, Las Vegas, satellites GPS and Silicon Valley start-ups are just a few examples of how the civilian world and the defense technology world are connected. That’s why I like my team to cover more than just pure military technology, but also emerging civilian technology that has its roots in military and intelligence missions.

We want to be right at the intersection of military preparedness, technological development, and finance — three areas with the greatest impact on your personal safety and the safety of your investments.

There’s more at stake here than just the military edge, although that is critical. From Ancient Rome to Venice to the British Empire, every great power has had a great form of money recognized by the entire world. Rome had the silver denarius and the gold aureus. Venice had the gold ducat. Britain had the gold sovereign.

The U.S. has the dollar and 8,000 tons of gold but no formal linkage between the two. China and Russia have each almost tripled their gold reserves in the past 10 years. Along with the military threat from Russia and China comes a financial threat backed by gold.

How will the U.S. respond? And what will the counter-response be?

Understanding the linkages among military prowess, technology, and international finance is our aim in this new project we’re undertaking.

Our expertise in the international monetary system and the future role of gold is just as deep as our military and technology expertise. We cover the geopolitical aspects of finance along with military technology to help you understand, and prepare for, the events shaping our lives.

We want to be your go-to place for the intersection of military and financial warfare enhanced by the force multiplier of technology. To guide you, we’ve created a brand-new system with one of the defense industry’s most credible and competent players.

If you’re familiar with how the military does reconnaissance, it will give you an idea for how we like to conduct our defense sector research. The military uses UAV’s, or Drones. They’re deployed 15,000 feet in the air. They fly over enemy territory to collect data in dragnet fashion. Then, back at base, the military employs smart analytics to sift through the vast array of data to narrow down to the target.

Our defense stock system is designed to apply this exact military intelligence mentality.

We start from the 15,000-foot level. Then we drill down from there to get only the most pertinent and lucrative information. Finally, we find and recommend the exact strike points to enter and exit defense technology investment opportunities.

We’re the only financial research service in existence today using this method to analyze the profit opportunities arising in the defense technology niche during this coming mega-boom in defense spending.

We’ve already seen amazing gains in the small plays we’ve identified because we’ve been ahead of the curve on this story. But given today’s breaking news about Trump’s budget request, this story is just getting started.

If the past is any indication, the defense sector should be one of the most lucrative investment stories for years to come.