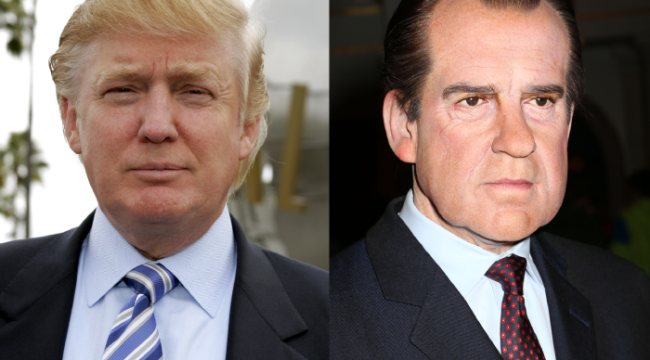 Approximately two months before the election on September 10th I locked down the final draft of my book, Trumped!

In the opening sentence I ventured the following opinion, which was most certainly not in the mainstream at the time:

FIRST THERE WERE 17. THEN LITTLE MARCO, LOW ENERGY JEB AND LYIN’ Ted were gone. At length, there was one. And now there is even a chance he may become President.

That he did, and contrary to all expectations, too. But now there is an excellent chance that Mike Pence will become the 46th occupant of that office.

This time the pundits do see it coming. That’s because they are complicit — functioning as self-appointed magistrates of a recount of the 2016 election.

Indeed, the mainstream media is no longer even in the news business. It’s conducting a grand witch hunt and venomous prosecution that will not be sated until the Donald vacates the Oval Office — one way or another, probably by a threatened invocation of the 25th Amendment by the GOP elders on Capitol Hill.

Yes, it sounds a tad far fetched. But the key to what comes next is hiding in plain sight.

The Donald is exceedingly vulnerable because he is an insurgent outsider who will eventually end up alone in the Swamp in helpless isolation.

Trump’s impetuous tweeting is a case in point. Take a recent tweet about Germany, for example. It was essentially on point, but amounted to waving a red cape in the face of the already enraged establishment bull:

We have a MASSIVE trade deficit with Germany, plus they pay FAR LESS than they should on NATO & military. Very bad for U.S. This will change.

Of course, the establishment’s concerns have less to do with peace and security than raising sales, earnings and stock prices in the Atlantic-area’s military industrial complex.

And the establishment won’t abide any threat to its power.

In this vein, the Donald is also pulling America out of the Paris Climate Accords, an establishment totem.

“Climate denialism” is about as offensive to establishment sensibilities as is “creationism.” So the shrieks of outraged disbelief reached ear-splitting decibels after Trump’s announcement.

I’m glad the Donald takes on the greatest “environmental hoax” of the modern era — even if it does accelerate his downfall.

That’s because it is based on an expansion of government that knows no limits — including the deliberate and systematic distortion of climate data to fit a weak theory that defies common sense and the known facts of the planet’s history.

In any event, the Donald’s jail break from the Paris Accords has further isolated him in the Imperial City — even if it does win him plaudits in the Rust Belt.

What will be the trigger that finally sends the establishment after Trump?

Ultimately, the hammer of fiscal crisis and a crashing stock market will break any remaining loyalty of the GOP elders as they smell the 2018 elections turning into a replay of the rout of 1974.

And then the Donald will be gone, and well before August 2018, too. I told an audience in Vancouver last Friday that it could happen by February.

The bottom line is that the Swamp is so undrainable that it will end up making mincemeat of Donald Trump.

Needless to say, the ultimate causes of his demise are anchored deep in the failing status quo.

America is so addicted to war, debt and central bank driven false prosperity that even the most resourceful and focused challenger would be taken down by its sheer inertia.

But the Donald is so undisciplined, naïve, out-of-touch, thin-skinned, unfocused and megalomaniacal that he is making it far easier for the Swamp critters than they deserve. To a very considerable extent, in fact, he is filling out his own bill of indictment.

Moreover, he is totally clueless about how to manage his presidency or cope with the circling long knives of the Deep State which are hell bent on removing him from office.

Accordingly, the single most important thing to know about the present risk environment is that it is extreme and unprecedented.

In essence, the Donald is the ultimate bull in an exceedingly fragile China shop — and an already badly wounded one at that.

And Amazon, poster boy for Bubble Finance, is trading around 190 times earnings.

Any untoward pinprick could send it into a tailspin — meaning that the coming political bleeding-out of the Donald amounts to a 50,000 pound pin.

It’s the mighty Orange Swan that will lay the casino low like never before.

Stated differently, in just the last 0.6% of the trading days since 1997, over 65% of the ultra-low VIX readings have occurred.

That’s complacency begging to be monkey-hammered.

That was surely true in late 1999 and early 2000 when the NASDAQ 100 rose by 30% in three months — just as has been recently when the FAAAM Five (Facebook, Apple, Amazon, Alphabet and Microsoft) gained 33% or $600 billion since the turn of the year.

But this time is actually different in a special sense.

At the heart of the matter is that the Washington-Wall Street establishment rests on a bipartisan political foundation that has no use for existential threats to their continued rule, respectively.

So the Deep State’s prosecution of Trump’s incumbency under the RussiaGate file is continuing apace, while a calamitous debt ceiling crisis is now less than two months away according to his own Treasury Secretary.

The debt-ceiling crisis will cause a thunderous panic among the clueless gamblers on Wall Street. And the resulting 40% plunge in the stock market will pave the way for the Donald’s eventual demise.

At that point the Donald will truly be friendless. For comparison’s sake, consider the fate of Richard Nixon.

Notwithstanding three decades of network building and the accumulation of vast IOUs from his relentless politicking and campaigning, the GOP establishment sent Nixon packing in August 1974 when the party’s demise stood just around the corner.

By contrast, the Donald has no GOP network, friends, IOUs or even history. A mere twelve years ago he was cavorting with the Clinton’s at Chelsea’s wedding.

When the S&P 500 drops below 1,500 there will be panic in the GOP precincts all around Capitol Hill. Then I expect Trump to be escorted to the South Lawn for his final trip aboard the Richard Nixon memorial helicopter.

What is different this time, however, is that America is in no shape to weather the ensuing storm.