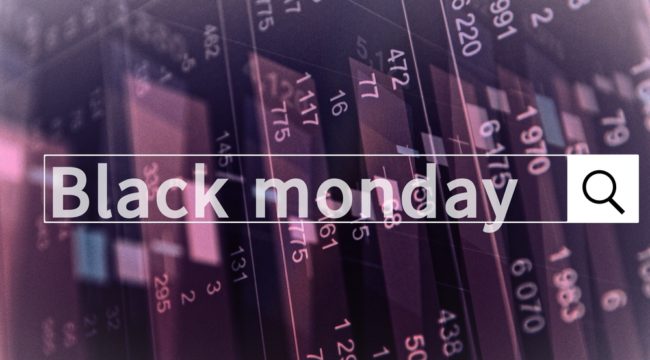 The Tripwire on the Next “Black Monday”

The Dow plunged 508 points that hell-mouth day — an unthinkable 22%.

We liken that October day in 1987 to the ancient Battle of Cannae… when invincible Rome lost as many as 70,000 legionnaires to Hannibal’s armies — in a single day.

Or July 1, 1916, the first day of the Battle of the Somme, when nearly 20,000 British soldiers fell before the German guns… and never got up.

What could lead today’s market to its own Cannae, its own Somme… another Black Monday?

Today we set aside our renowned optimism… enter into the spirit of doom… and consider one possibility.

Harley Bassman is a world-class expert in derivatives — what Warren Buffett has termed “weapons of mass destruction.”

Bassman’s taken the current market and put it under his microscope.

He specifically wanted to answer:

The only question one cares about, identifying the tripwire that would tip our system into disequilibrium.

That is, what could turn a bad day on Wall Street into another Black Monday-level event?

And is there a specific point when the the dominoes could start going over?

But before revealing that (black) magic number, let us identify the villain of this fellow’s tale, a possible trigger for the next event…

A typical portfolio might normally contain 60% stocks and 40% bonds.

But market volatility has been so low lately, many stocks seem as low-risk as a three-month Treasury.

Note the diverging paths between global economic uncertainty and market volatility in this chart: 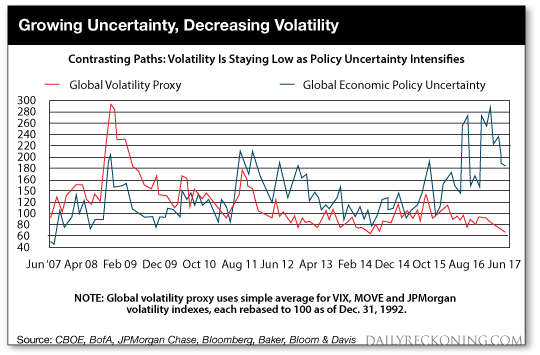 This record-low volatility has led investment funds to overshift their holdings away from bonds… and toward stocks.

All is well as long as peace is abroad and rainbows appear in the skies over Wall Street.

But if volatility spikes, if a storm whips up, all those funds that fattened on stocks will drop them quick as a wink.

It began as just another down day…

But once the market dropped below a critical threshold that October day, the computers caught a collective fever and unloaded everything in sight at the speed of electrons — hence the single-day 22% plummet.

As this Bassman fellow explains the dynamic:

Once a destabilizing event occurs… [it leads to] a feedback loop where asset selling begets more selling. This… exacerbated (but did not start) the 1987 crash.

Or as Jim Rickards describes:

In a bull market, the effect is to amplify the upside as indexers pile into hot stocks like Google and Apple. But a small sell-off can turn into a stampede as passive investors head for the exits all at once without regard to the fundamentals of a particular stock.

In nuce: Record-low volatility has thrown a mask over rising risk.

Investment funds are flush with stocks they’ll all try to drop at once when a destabilizing event breaks.

And that selling could possibly spiral once a critical threshold is crossed.

Ah, yes, but what is that threshold?

At what point does that down day on Wall Street turn into a Cannae… a Somme… another Black Monday?

Bassman’s investigations have yielded an answer…

It seems possible that as little as a 4% decline in a single day could be enough to create critical mass.

From today’s stratospheric Dow reading of 21,527 (at writing)… a 4% single-day swoon translates to an 861-point loss.

A thumping drop, yes… but not beyond imagining.

A canvass of the past decade reveals 15 single-day drops of at least 469 points.

Could the next black day exceed even that figure?

The answer lies outside our slender grasp.

And that 777-point cataclysm represented a 7% single-day plunge.

And if Bassman is right, a mere 4% single-day drop could be enough to unleash the hounds.

So in that sense today’s market could be even more precarious than 2008’s?