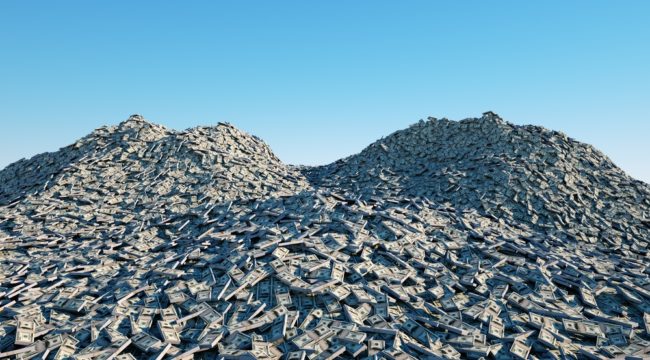 Trillion-Dollar Deficits Far as the Eye Can See

That is the highest figure for any February on record.

For the first five months of this fiscal year (Oct.–Feb.), interest on the public debt has risen 8% over the same period last year. 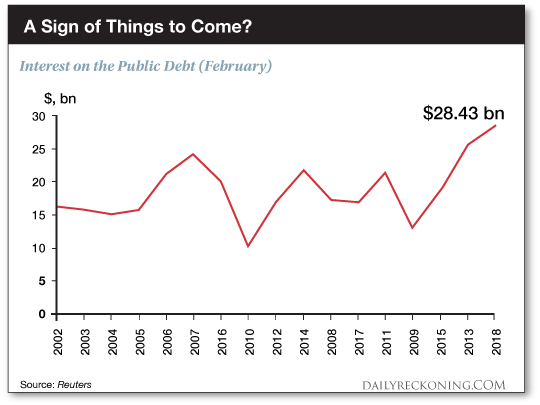 It is tax season… and tax returns deplete its coffers.

But this February emptied its change much more than the custom.

So the specter of trillion-dollar deficits once again appears…

Why the surging deficits — why now?

The answer arrives in two parts:

According to the Congressional Budget Office, receipts declined by 9.4% from last year as tax refunds rose and the new withholding tables went into effect… Outlays meanwhile rose by 2% due to higher Social Security and [as] Medicare benefits rose and additional funds were released for disaster relief.

The pace should only quicken as the tax cuts take full effect and last month’s budget deal balloons spending over the next two years.

But not for higher deficits.

Spend more if you must, it whispers — but pay your way as you go.

Paying bills with borrowed money is the way of the scoundrel… the profligate… the bankrupt.

U.S. public debt nears $21 trillion… and swells by the day.

Perhaps you wonder why.

“Some circumstantial evidence is very strong, as when you find a trout in the milk,” said Thoreau. 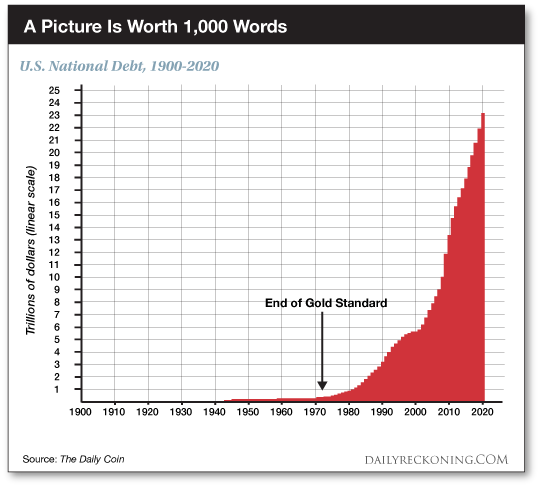 Now turn your attention to the parabolic rise in debt after the financial crisis of 2008.

Surely the interest on this debt has swamped the Treasury.

Ah, but with its massive bond purchases post-crisis, the Federal Reserve hammered interest rates to zero.

So interest payments on the debt have steadied since the financial crisis began — even though total debt now scrapes the sky.

In fact, interest payments on the debt were higher in the mid-1990s than last year.

But the days of wine and roses, of nearly cost-free borrowing… are over.

Years of near-zero interest rates… allowed governments and households to borrow money for almost nothing. But that’s changing… [and] this is where things get scary…

We let it soak in, Mr. Faber… and it seeped clear through to the marrows.

If a 1.25% rise in short-term rates translates to a 38% increase in interest on the national debt… what happens if rates truly “normalize”?

The Fed may raise rates four times this year alone.

If interest rates rise to historic norms… could interest on the debt ultimately gobble 25% of the entire budget?

The mind staggers under the possibility.

But the math is the math.

Worry not, soothes the official voice.

And for years they haven’t — or not much.

But the laws of economics will not be forever conned, the old-timers insist.

We suspect a great reckoning will prove once and for all that deficits do matter.

When that happens… is on the knees of the gods.