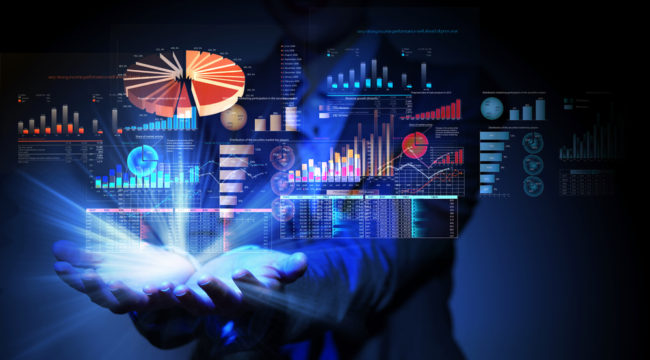 The Trading Secret the Media Won’t Tell You…

Be afraid… be very afraid…

That’s the headline from CNN, Reuters and Bloomberg.

That sounds ominous for the markets. May be time to head to the high country, get the rifles and lock down for end times.

But how do they know?

Well, the PhDs from the International Monetary Fund released their latest prophecies.

The world’s so-called “brightest” economists at the IMF went into a dark room, held hands, crunched their data and ran their complex models…

And what they came up with is worth as much as Hillary Clinton pledging to tell the truth, the whole truth and nothing but the truth.

Here’s what has the financial media so frightened…

The IMF recently downgraded its global growth forecast. And it included a “severe” prediction that worldwide growth could decline to 2.8% for the year.

That would push growth below 3% for the first time since the global financial crisis.

But it could get even worse than that, says CNN:

The IMF said it was difficult to predict the fallout from Brexit, and warned that its revised forecast may be way too optimistic, saying more negative outcomes are “a distinct possibility.”

You know what else is a distinct possibility? That the IMF bean counters have no freaking idea what the hell they’re doing or talking about.

Have a look at this chart that compares actual global GDP growth versus forecasts from IMF economists over the past seven years. 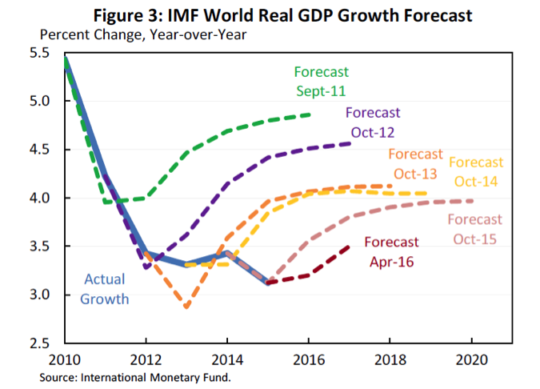 As you can see, the IMF’s global growth predictions have been so wrong you immediately wonder if it’s all on purpose. Seriously, your kid or grandkid flipping a coin is more accurate.

Consider this excerpt from the Economist.

Over the period [1999-2014], there were 220 instances in which an economy grew in one year before shrinking in the next. In its April forecasts the IMF never once foresaw the contraction looming in the next year. Even in October of the year in question, the IMF predicted that a recession had begun only half the time.

A blind chimp with learning disabilities would beat that record.

Look, I get it. News reporters need to pay their rent. They get paid to write front page stories with catchy headlines. Whether they know which end is up is immaterial to them.

And IMF economists with pedigree degrees must justify their existence and paychecks by purporting to do complex research and then formulating newsworthy forecasts.

Sure, their headlines might grab attention. And their research might seem legit to the uninitiated. But nothing they offer will help you make money in the markets.

Will global growth slow? Maybe. Maybe not. Nobody knows.

The one thing we do know is that the IMF’s models won’t give you the correct answer on any consistent basis. But you won’t get my truth of the situation from the mainstream media hacks.

As an investor, why would you pay any attention to what they tell you, except unless you’re so unsure and scared that you will trust any suit that comes on the tube?

That’s why trend following relies only on one kind of “good” data… and that’s price data.

As trend followers, we identify developing price trends and then trade in the direction of those trends as they unfold. That’s it.

No fancy stories, no misleading headlines and no sophisticated economic models ever enter into the trend following trading equation. Just reliable price data that shows us exactly what any market is doing right now.

Trend following is not sexy. It won’t make you sound smart as you try to B.S. your friends and family about which way you think stocks, gold, the dollar or whatever market will go.

But trend following is the one methodology that time and time again has produced the world’s most successful investment performance in bull, bear and surprise markets.

When the proverbial “you know what” hits the fan, trend following is always standing there with a preset plan of action. No guessing, no panic, simply follow your investment rules checklist—just like a surgeon follows a checklist of what do in the operating room.

Now that’s the best front page story any investor could ever hope to see in the mainstream media.

Sadly, for the millions of investors that need this truth, I am one of the few publicly saying it.

Jim Rickards’ open letter to President Trump on the threat of new world money, known as special drawing rights. Here’s the full draft to the President…