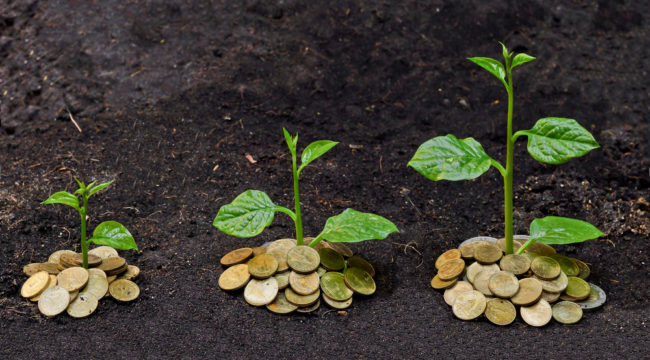 The Toxic Fruit of Financialization: Risk Is for Those at the Bottom

Financialization of the economy substitutes expansion of interest, leverage and speculation for real-world expansion of goods, services and wages.

Financial “wealth” created by leveraging more debt on a base of real-world collateral that doesn’t actually produce more goods and services flows to the top of the wealth-power pyramid, driving the soaring wealth-income inequality we see everywhere in the global economy.

As this phantom wealth pours into assets such as stocks, bonds and real estate, it has pushed the value of these assets into the stratosphere, out of reach of the bottom 95% whose incomes have stagnated for the past 16 years.

Moreover, higher debt loads and higher interest payments of financialization inhibits people at the bottom of the wealth-power pyramid from taking risks such as starting a small business.

The core problem with financialization is that it requires ever more extreme policies to keep it going. These policies are mutually reinforcing, meaning that the total impact becomes geometric rather than linear.

Put another way, the fragility and instability generated by each new policy extreme reinforces the negative consequences of previous policies.

These extremes don’t just pile up like bricks — they fuel a parabolic rise in systemic leverage, debt, speculation, fragility, distortion and instability.

This mutually reinforcing, geometric rise in systemic fragility that is the unavoidable output of financialization is poorly understood, not just by laypeople but by the financial punditry and professional economists.

The asymmetry of risk and exposure to loss resulting from financialization is about to become consequential.

Financialization has reached the top of the S-curve and is now in the decline phase. As noted on this graph, what worked so effortlessly in the boost phase of financialization not only no longer works, it actively boosts the risks of sudden, catastrophic losses. 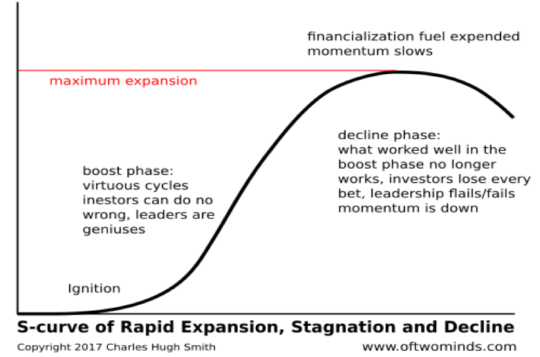 Those who have pushed the risk down the wealth-power pyramid are confident the Federal Reserve will continue to limit the risks of speculative financialization. The S-curve is a pattern of Nature. If you’re confident the Fed is now the ultimate power in the Universe, then you’re betting that the Fed and Treasury will always absorb all the risk and all the losses, with zero consequences.

The S-Curve suggests that bet isn’t as low-risk as those at the top of the wealth-power pyramid currently believe. 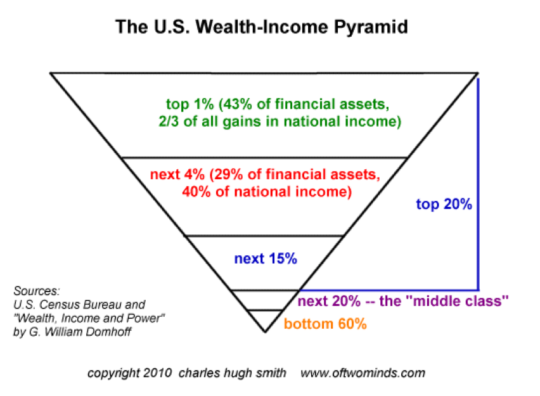 And financialization is in a death spiral.

Each “fix” that boosts leverage and debt fuels a speculative boom that then fizzles when the distortions introduced by financialization destabilize the real economy’s credit-business cycle. And each new policy destroys another level of prudent fiscal/financial discipline…

The discipline of sound money? Gone.

The discipline of limited leverage? Gone.

The discipline of prudent lending? Gone.

The discipline of mark-to-market discovery of the price of collateral? Gone.

The discipline of losses being absorbed by those who generated the loans? Gone.

And so on. Every structural source of discipline has been eradicated, weakened or hollowed out. Financialization has consumed the nation’s seed corn, and the harvest of instability is ripening in the fields of finance and the real economy alike.

You can only conclude that the U.S. economy is doomed to secular stagnation and never-ending recession.

The stock market, bond yields and statistical measures of the economy can be gamed, manipulated and massaged by authorities, but the real economy cannot.

This is especially true for the core drivers of the economy, real (adjusted for inflation) household income and real disposable household income, i.e. the real income remaining after debt service (interest and principal), rent, healthcare co-payments and insurance and other essential living expenses.

If you want to predict the future of the U.S. economy, look at real household income. If real income is stagnant or declining, households cannot afford to take on more debt or pay for additional consumption.

The Masters of the Economy have replaced the income lost to inflation and economic stagnation with debt for the past 17 years. They’ve managed to do so by lowering interest rates (and thus lowering interest payments), enabling households to borrow more (and thus buy more) with the same monthly debt payments.

But this financial shuck and jive eventually runs out of rope: eventually, the rising cost of living soaks up so much of the household income that the household cannot legitimately afford additional debt, even at near-zero interest rates.

For this reason, real household income will dictate the future of the economy. If household incomes continue stagnating or declining, widespread advances in prosperity are impossible.

The Masters of the Economy have played another financial game to mask the erosion of real income: inflating speculative asset bubbles to boost the illusion of wealth, a form of financial sorcery called the wealth effect.

Households that see their stock and bond funds swelling by 50% to 100% in a few years are emboldened to believe this phantom “wealth” is permanent and thus can be freely spent in the present.

The problem with this financial shuck and jive is only the top 5% own enough assets to experience the speculative high of asset bubbles. This is one reason why the top 5% have pulled away from the bottom 95%.

Those with some financial wealth (the top 20%) enjoyed substantial gains, but the truly outsized gains were reserved for the top 5%, the class that owns the majority of the nation’s wealth.

The problem for the Masters of the Economy is that adjusted for inflation, even the incomes of the top 20% and 5% have gone nowhere in the 21st century. If even those households exposed to the enormous gains of this century’s two asset bubbles (2002 to 2008 and 2009 to the present) have stagnated, then all the financial shuck and jive isn’t trickling down to real income, which is the bedrock of the real economy.

The gains since 1992 reflect the national distribution of wealth very closely: those with minimal financial wealth (the bottom 80%) experienced minimal gains in real income.

All that changed in the Financialization Era of 2000 to 2015. Despite two unprecedented asset bubbles, the inflation-adjusted incomes of the top 40% have at best returned to the levels of 2000, while the real incomes of the bottom 60% have fallen dramatically since 2000.

You can only conclude that the U.S. economy is doomed to secular stagnation and never-ending recession as long as real income for all segments is stagnating or declining (other than the top of the wealth apex, i.e. the top .5% of households).

Every other economic measure other than real household income is shuck and jive, statistical trickery, or phantom “wealth” conjured into existence by unsustainable credit/asset bubbles.

But if the Masters of the Economy can’t move the needle of real household income for the bottom 95%, they’ll end up with a banquet of consequences that extend deep into the social and political orders.

The peasants do have pitchforks after all.