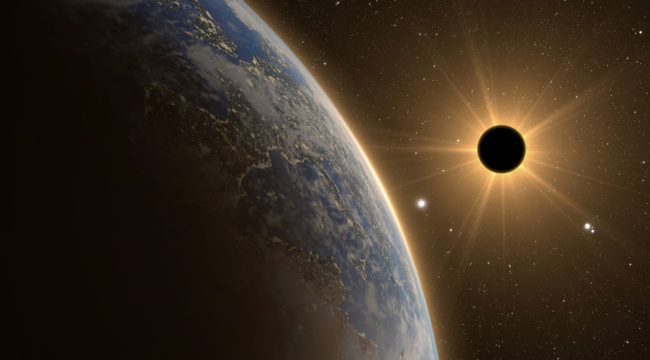 What Today's Eclipse Means for Markets

The Sun shall be turned to darkness… before that great, resplendent day, the day of the Lord, shall come.
– Acts 2:20

A full solar eclipse fell upon America today… like a rolling tide of night… and temporarily washed away the sun.

For a brief period, cows lay down in the fields, birds settled in for evening, crickets crooned their nightly serenades.

It was the first complete solar eclipse over all America since 1918.

The very word “eclipse” evidently has roots in the Greek ékleipsi — abandonment.

Louis XIV — the “Sun King” — felt so abandoned by the sun that symbolized his reign, he apparently died of grief.

Old Louis died right after a solar eclipse appeared over Paris in 1715.

We live in enlightened scientific times of course.

Newton and his clockwork universe chased the gods from the heavenly spheres.

But deep beneath the surface… somewhere in the subconscious mists… man still clings to his ancient superstitions.

So… what evil might today’s eclipse augur, what occult diablery could it portend?

These are ticklish times, after all.

Rumors of war swirl around the Korean Peninsula…

Are they right? Is today’s solar eclipse a harbinger of recession?

“Over the past 100 years,” claims U.S. News & World Report economics writer Andrew Soergel, “the U.S. has been within a year of entering – or was already in – a recession when nine of 15 solar eclipses were visible from the U.S.”

Far from certain… but not far enough for comfort.

What about the stock market?

It seems to have lost its foothold on the latter recently.

Last week both the Dow and S&P closed lower for the second consecutive week.

It’s been four consecutive weeks for the Nasdaq.

Some suggest — perhaps in jest — that today’s total eclipse of the sun could possibly explain the market’s recent slip.

But some appear serious…

“A solar eclipse still makes the stock market drop, and some are preparing for this one as though it will bring Armageddon,” reports The Atlantic.

Statistician Steve Puetz has examined the historical link between eclipses and market crashes. Says he:

“It just happens an unusually large amount of times, and I can’t explain it. But it seems to be significant.”

“Not every eclipse turns into a crash,” Puetz cautions. “You need a bubble to have a crash, but when a bubble forms, they tend to crash near the time of a lunar eclipse.”

Incidentally, the Dow notched a record high on Aug. 7… the same day as a lunar eclipse.

Meantime, some wildly claim that stocks are in a bubble. Perhaps you’ve heard?

I found little correlation. On no occasion did a total solar eclipse visible in the U.S. occur on the day of a major market turning point. The closest was the market bottom on Sept. 7, 1932, which came just a week following the eclipse on Aug. 31 of that year.

But other eclipses haven’t occurred anywhere near as close to turning points. The eclipse on Jan. 24, 1925, for example, came in the middle of the great bull market of the 1920s; no major trend change was on even the distant horizon.

He does admit however that total solar eclipses do throw extended shadows across markets. But these are very long shadows:

On average since 1900, 10 months have separated major market turning points and total solar eclipses that were visible within the U.S… assuming the future is like the past — we can at the 95% confidence level say that the Aug. 21 eclipse will be followed by a bull market top within 23 months.

We can thus be confident of a market top within 23 months — 95% confident.

But 23 months isn’t quite day, hour and minute.

The bull market can peg along until July 2019 in this case.

The evidence has therefore failed to convince this juror.