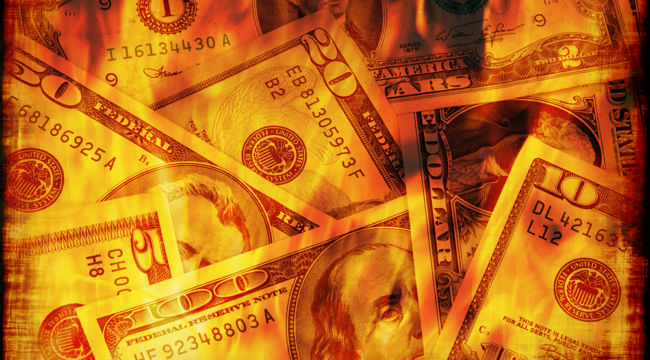 Three Steps to Save America from Collapse

Our monetary system is broken. It’s given us low growth, a shrinking job force, inequality beyond what a healthy economy would produce, inefficiency, and the unnatural growth of finance as a portion of the economy.

Our aging Federal Reserve System starves both small businesses and Silicon Valley of the capital needed to grow jobs and wages.

Fed policy translates into zero-interest-rate loans for the government and its cronies, and little or nothing for savers or small businesses. And it has transformed Wall Street from an engine of innovation into a servant of government power.

But I believe America can be set on the right path towards a robust and broadly shared capitalism again with just three steps.

This country already allows gold currency. The Treasury mints millions of one-ounce silver eagle dollars that are worth more than twenty dollars apiece and one-ounce gold eagle fifty-dollar pieces that are worth $1,150 apiece.

Virtually all of these are hoarded.

Though it has been legal since 1987 to use them at their metallic value, that route leads to a capital gains tax on their appreciation.

Since the appreciation of a gold or silver piece is by reasonable definition all inflation, the tax is simple confiscation (like all capital gains taxes on spurious inflationary profits).

The move of gold and silver coins into circulation would offer a corrective of constitutional money for any dollar debauchery by the Fed.

Despite imprudent governmental interference, the internet remains a bastion of American power, with U.S. companies such as Apple, Google, Amazon, Microsoft, Facebook, eBay, Cisco, Qualcomm, and scores of others capturing the bulk of all internet revenues.

The internet plays a central role in the American economy. But there is a profound flaw in its architecture, as I have explained before. It was designed for communications, not transactions.

Around the globe, transactions are shifting toward the internet. Although online purchases remain between 6-7% of all commerce, internet trade is expanding rapidly.

But to buy something on the Internet, you often have to give the supplier sufficient information — credit card number, expiration date, address, security code, mother’s maiden name, and so on — to defraud you or even to steal your identity.

This information therefore has to be protected at high cost in firewalled central repositories and private networks, which are irresistible targets for hackers.

With transactional overhead dominated by offline financial infrastructure, micropayments are uneconomic, and the internet fills with fake offers, bogus contracts, and pop-up hustles. Some 36% of web pages are bogus, emitted by bots to snare information from unwary surfers.

The internet today desperately needs a new trusted and secure payment method that conforms to the shape and reach of global networking and commerce.

It should eliminate the constant exchanges of floating currencies, more volatile than the global economy that they supposedly measure. It should be capable of transactions of all sizes. And it should partake of the same monetary sources of stable value that characterize gold.

The new system should be distributed as far as internet devices are distributed: a dispersed organization based on peer-to-peer links between users, rather than a centralized hierarchy based on national financial institutions.

Fortunately such a payment system has already been invented. It is set to become a new facet of internet infrastructure.

It is called the bitcoin blockchain.

The bitcoin blockchain is already in place. It functions peer-to-peer without the need for outside trusted third parties. And it follows theorist Nick Szabo’s precursor, bitgold. Its value, like gold’s, is ultimately based on the scarcity of time.

Even if bitcoin proves flawed, scores of companies are developing alternatives based on the essential blockchain innovation that can serve as a successful transactions medium for digital commerce. The existence of such a system would enable sellers on the internet, such as content producers, to name their own prices and collect their funds directly.

And the very process that validates the transaction would prohibit spam. There would be no hassle of bartering content for advertising revenues at some aggregator such as Google. Aggregators with advertising clout would merely add inefficiency to an automated system that minimize transaction costs.

The internet would have a money system of its own.

With a low market price for goods and services — Google and other players could charge millicents for their services and still make a mint — the internet economy would transcend its current den of thieves and hustlers.

It could attain its promise as a frictionless facilitator of human creativity rather than as a channel of chicanery. Its markets would impel the world toward new realms of knowledge and wealth.

But the success of a new global standard of value on the internet entails a ban on taxation of internet currencies. If only government currencies escape taxation, alternative currencies such as bitcoin will always be relegated to niches.

That brings us to the third step: fixing the U.S. dollar.

How do we do this?

Monetary scholar Judy Shelton already devised a play. The chief instrument would be the creation of Treasury Trust Bonds — five-year Treasuries redeemable in either dollars or gold. They could be enacted either through legislation or as a Treasury initiative.

Legislation would specifically authorize the issuance of five-year Treasury securities that pay no interest, but provide for payment of principal at maturity in either ounces of gold or the face value of the security, at the option of the holder.

The instrument would be an obligation of the U.S. government to redeem the nominal value (“face value”) in terms of a precise weight of gold stipulated in advance or the dollar amount established as the monetary equivalent. The rate of convertibility (in gold grams) is permanent throughout the life of the bond; it defines the gold value of the dollar.

As Alan Greenspan declared in the Wall Street Journal during the previous era of monetary turmoil, in 1981:

“In years past a desire to return to a monetary system based on gold was perceived as nostalgia for an era when times were simpler, problems less complex and the world not threatened with nuclear annihilation. But after a decade of destabilizing inflation and economic stagnation, the restoration of a gold standard has become an issue that is clearly rising on the economic policy agenda.”

In fact, Greenspan suggested that “Shelton bonds” would pave the path to the future…

“The degree of success of restoring long-term fiscal confidence will show up clearly in the yield spreads between gold and fiat dollar obligations of the same maturities. Full convertibility would require that the yield spread for all maturities virtually disappear.”

Of course, as Fed chairman, Greenspan went on to become a major maestro of monopoly money at the Fed. And in his subsequent books he expressed many regrets and misgivings about the nature and role of central banks.

These are the three steps that can restore integrity to the monetary system.

As I explained yesterday, this is how we can save Main Street from the menace of monopoly money, transcend the dismal science of stagnation and decline, and restore the American mission and dream.